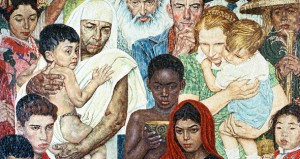 Recently the Federal Service for Supervision of Communications, Information Technology, and Mass Media warned Russia media against publication of cartoons on religious topics, as, according to the law, any mocking of saints of various religions can be treated as incitement of religious hatred.Harmonization of inter-ethnic and inter-religious relations is thought to be a priority of Russia’s ethnic policy. Moscow believes that the country’s prosperity depends on building relations between representatives of various ethnic groups and religions.

Speaking about the role of religion in society’s life, Roman Bogdasarov, the deputy chairman of the agency for relations between the church and society, the head of the Secretariat of the Russian Inter-religious Council, stated: “There is a notion of traditional morality; nobody can eliminate, rewrite or change it. And the traditional religions of our country stand on a serious and firm platform. It is impossible to ruin the dialogue which has been developing in our country during the centuries-long history of Russian statehood.”

Orthodox Christianity, Islam and Judaism present an experience in Russia which has been accumulated by previous generations of religious people. “Stepping back from traditional morality, a person says: “It’s not wrong if I pee on the eternal flame. It’s alright if I draw a picture in a magazine or on a wall. This is my freedom!” When this idea is born in a person’s mind, he puts himself beyond morality. And nobody can stop such a person, except for his conscience,” Bogdasarov thinks.

According to him, today “a social experiment is being undertaken, when under cover of freedom, things are imposed on you which would be treated as a madman’s insanity by our ancestors 100 years ago. They would say it was impossible. However, today we can see that the traditional family, the attitude toward children, education within the norms of traditional morality, pale into insignificance. They say that religious leaders are retrogrades who prevent modern progress… Humanity stands on the edge of survival: whether selfish interests will rule the world or somebody’s bad will will do it. Thus, the Russian Orthodox Church, the Muslims of Russia and the Jews of Russia call for dialogue, so that we could solve problems together, speak about love of humanity, about true love of humanity, about family values.”

Bogdasarov is sure that Russia has become “an index of the level of cooperation between traditional religions. Nobody in the world has such an experience as we have. It is a unique platform. On February 14th we will celebrate the first anniversary of the Sochi Olympic Games. We managed to consolidate and organize prayer rooms for believers of world religions at the Games. The International Olympic Committee included them in the experience of organization of the Olympic Games. Muslims helped with the organization of prayer rooms, according to Islamic rules; Jews – their own prayer rooms. The experience of cooperation was unique.”