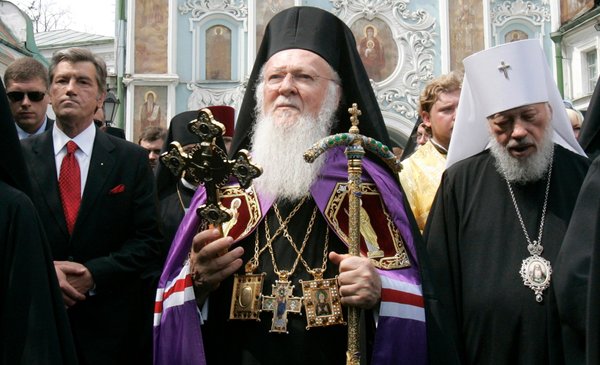 Ecumenical Patriarch Bartholomew I of Constantinople, center, in 2008.

At a conference near Istanbul last June, the chimpanzee expert Jane Goodall spoke about the endangered habitat of what she called “our closest relatives.” Underlining the evolutionary link, she described her encounter with a senior male ape who had a “beautiful white beard.”

With a smile, she turned to the 72-year-old man in the front row and added, “Very much like yours.”

The man with the long white beard was Ecumenical Patriarch Bartholomew I of Constantinople, the spiritual leader of the world’s Orthodox Christians. Fortunately, he is known for his easy, affable manner, and he joined the laughter that followed.

But his commitment to environmental activism is deeply serious, earning him the nickname the Green Patriarch. He has preached that caring for the environment is a religious imperative, and for more than a decade, he has made a point of bringing together theologians and scientists like Dr. Goodall for debates and briefings.

This year’s reports of record melting of the earth’s ice sheets and extreme droughts have given a new urgency to Bartholomew’s messages about the degrading natural world. While economists and politicians prescribe more growth and consumption to overcome economic crises, the patriarch insists that the real crisis is cultural and spiritual, and can be overcome only by moving away from rampant materialism.

All human beings, he has said, should draw a distinction “between what we want and what we need.”

In September, he published a strongly worded encyclical calling on all Orthodox Christians to repent “for our sinfulness” in not doing enough to protect the planet. Biodiversity, “the work of divine wisdom,” was not granted to humanity to abuse it, he wrote; human dominion over the earth does not mean the right to greedily acquire and destroy its resources. He singled out “the powerful of this world,” saying they need a new mind-set to stop destroying the planet for profit or short-term interest.

Other religious leaders, including Pope Benedict XVI, the Dalai Lama and the archbishop of Canterbury, have also called for responsible stewardship of the environment. But Bartholomew has gone further than most; some theologians call his stance revolutionary.

“Traditionally in Christianity, sin was what you did to other humans,” said Kallistos Ware, a prominent Orthodox theologian based in Britain, “but Bartholomew insisted that what you do to the animals, the air, the water, the land can be sinful, not just folly, and that was quite a change.”

Aides say that Bartholomew’s embrace of environmental issues is part of his agenda to modernize a deeply conservative church that can seem distant and insular, with its focus on long Byzantine rituals and mysticism. Speaking in defense of nature as a creation of God fits church teachings, and perhaps just as crucial, his aides say, it can also transcend the rivalries and nationalist rifts of the Eastern Orthodox Church. As a federation of 15 independent national churches, it lacks the central authority of, say, the Vatican.

Still, Bartholomew’s seat, established 1,700 years ago, holds primacy among the world’s 300 million Orthodox Christians. As “first among equals” in the church, he acts as convener and can set the agenda for discussion.

Not all church prelates are inspired by his efforts to enlighten the faithful on the environment. “The patriarch is going against the current in much of Orthodoxy,” said the Rev. John Chryssavgis, an archdeacon of the church and adviser on environmental issues. “He has to preach and promote this constantly.”

Aboard a ferry steaming toward Istanbul, Father Chryssavgis pointed out a sprawling church-owned building perched atop of the island of Buyukada. A former orphanage, it was seized by the Turkish government but returned to the church recently. Now empty and in disrepair, it will become an interfaith study center for the environment if Bartholomew has his way.

“He wants a permanent institution,” Father Chryssavgis said. “When he passes on, there may not be the same concern for the environment.”

The impact of the patriarch’s many sermons and conferences is difficult to gauge. There has been wide interest in a new book, “Greening the Orthodox Parish,” said Frederick Krueger, its American editor. Subtitled “A Handbook for Christian Ecological Practice” and with a preface by Bartholomew, it covers theology, special liturgies and prayers as well as science papers and practical advice.

Numerous Orthodox monasteries and churches in Eastern Europe and the United States have switched to solar energy in recent years.

Among them is the Chrysopegi monastery on the Greek island of Crete, where the nuns use the environmental texts of the patriarch and other theologians in their teachings.

“More and more young people are coming to our courses,” Mother Theocheni, the abbess of the monastery, said at the conference at Halki, near Istanbul. “They come to find meaning. Many seem to find inspiration in ecology. It’s been growing fast for the last 10 years.”

A version of this article appeared in print on December 4, 2012, on page D3 of the New York edition with the headline: Orthodox Leader Deepens Progressive Stance on Environment.