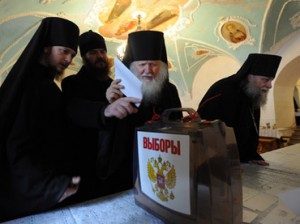 The majority of Russians would be happy to see churchmen run for posts in government bodies. However, far fewer citizens are actually ready to vote for priests, a poll has revealed.

Some 43 per cent of Russians believe that clerics can take part in elections since they have the same rights as all other citizens, the Russian Public Opinion Research Center (VCIOM) revealed.

At the same time, 38 per cent of Russians insist that priests should do their own business and not interfere with politics, cites Izvestia daily. Those who oppose the idea are adamant that the Church must be kept separate from the state.

While 42 per cent say they could cast their ballot for a cleric, 44 per cent rule out such a possibility.

The head of VCIOM, Valery Fedotov, thinks the reason citizens want Church representatives to take part in elections is because there has been a drop in public esteem for parliamentarians over the past several years. Perhaps it would return some respectability to officialdom.

Recent corruption scandals have only added fuel to the fire, he told Izvestia newspaper. Clerics, on the other hand, are enjoying respect among the society along with teachers and doctors, Fedotov added.

Russia is a secular state, where priests cannot be involved in political activities or campaigning.

The discussion about clerical participation in the polls was stirred up following a Holy Synod resolution in October. It defined exceptional cases when clerics are allowed to run for elected office in government.

That refers only to cases when there is a necessity to counter “schismatic or other religious confessions’” forces seeking to use elected bodies to fight against the Orthodox Church. Still, a cleric is banned from being a member of any political party or holding any post in it, even if he runs on a party ticket, the resolution said.

Following decades of repressions against the clergy and religion during the Soviet era, the Orthodox Church has played a huge role in Russia’s spiritual revival following the collapse of the USSR. Thousands of new churches were built and those ruined were renovated. Besides that, it is now a common thing to see top senior officials attending prayers during big Orthodox festivals, as well as senior clerics meeting with top-level representatives of state.

However, part of the Russian population accuses the Church of fusion with the state and strongly opposes its growing influence.

The infamous performance by Pussy Riot in Moscow’s main cathedral made this conflict extremely obvious. The female band’s members stated their “punk prayer” was a protest against Vladimir Putin also alleging ties between top clerics and authorities. Three members of the punk band were sentenced to two years in jail for hooliganism, which triggered a new wave of anti-church sentiment.

There have been several incidents lately when vandals desecrated holy sites across Russia, chopped down crosses or left graffiti on the walls of churches. Meanwhile, there have been numerous media reports about churchmen leading inappropriate lifestyles.