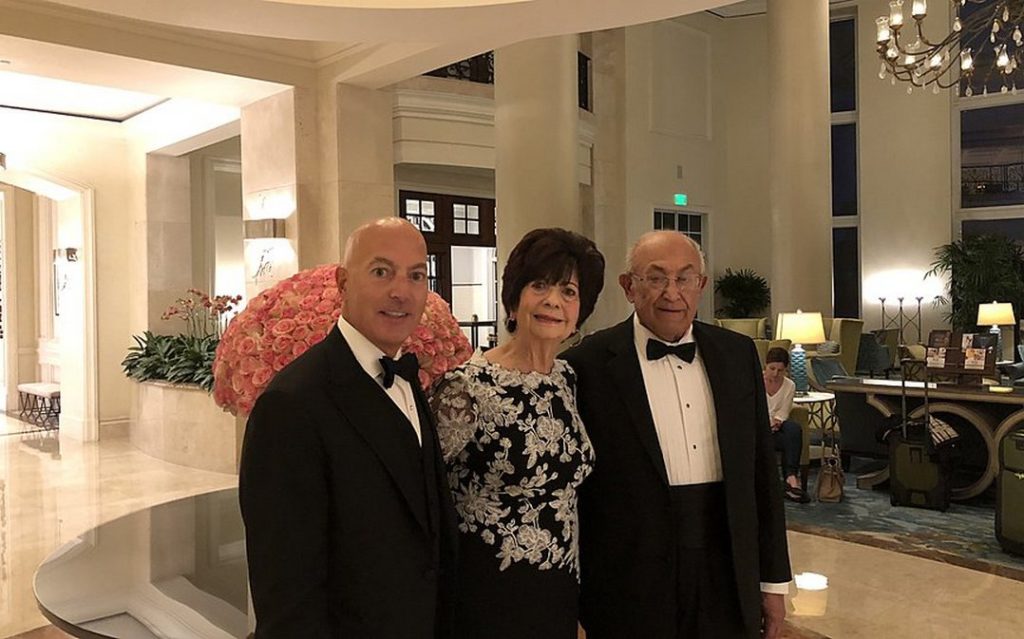 BOSTON – On Wednesday, October 27, His All-Holiness Ecumenical Patriarch Bartholomew will visit and bless the Evyenia’s House of Hope in Weirton West Virginia, the birthplace of prominent businessman Archon Michael Psaros.

Since 2015, Evyenia’s House of Hope has become a place for families to repair their lives. Under the umbrella of the Weirton Christian Center, the House became a place for supervised visitations for children and the parents they are separated from. Licensed supervisors from Homebase and youth services systems have three different Visitation Rooms that can be used throughout the week to bring families together.

The second floor houses the Weirton office for Catholic Charities of West Virginia and the Upper Ohio Valley Sexual Assault Help Center. And in the basement, hundreds of formal gowns are available for use for those who can’t afford to buy new ones – for just the cost of a $25 cleaning fee. Evyenia’s house has truly become a House of HOPE for the families in the town of Weirton which, in the past was the par excellence steel town of America.

The Evyenia’s House of Hope is actually a sacred gift of Michael Psaros to his hometown where he was born and raised by his beloved parents George and Mary Ann, who taught him the ethos and values of Orthodoxy and Hellenism.

Speaking to The National Herald Psaros said, “I donated my grandmother’s house, that I bought after she fell asleep in the Lord, to the Weirton Christian Center. My Grandparents, Harilaos and Eveyenia, immigrated from Olympus in Xios in the early 1930s. My `Yiayia’, Evyenia, lived in this house her entire life and raised her three daughters, Kaliope, Marianna, and Elefteria (of blessed memory) in this home. My `Papou’, Harilaos, died before I was born, from an illness that today can be treated with a simple visit to the drug store.”

Psaros added, “I donated the home to the Weirton Christian Center, a not-for-profit religious institution founded by the Baptist Church 100 years ago, in the name of my Yiayia, Evyenia” – https://weirtonchristiancenter.com. “My heart and my soul will always be in that home. The most love I ever felt was in that home. It is in that home where my Yiayia, who was pulled out of school after she completed the third grade (the most educated young girl in the village), taught me to read and write – she would read to me endlessly from the Odyssey (this was the `text book’ used in her village).”

He continued: “She taught me how to Offer the `Aspile and Kethosemin’ during Lent, and all aspects of our Orthodox Faith. She taught me how to speak in public (always while standing in front of her International Harvester `ice box’) in the manner of an army drill sergeant. She would read me Greek poetry – from epic poems to simple beauty. She taught me how to tend the vegetable garden in her backyard, a passion I have until this day.”

Speaking about the Christian Center, Psaros said, “in the first part of the 20th Century, the Weirton Christian Center helped the thousands and thousands of immigrants that came to Weirton to work in the Weirton Steel assimilate. Now, 100 years later, our Church, the All Saints Church of Weirton, WV gives back through the Weirton Christian Center in so many ways – for example, our parishioners were major financial benefactors to construct the new building the Center uses `uptown’, versus Evyenia’s House of Hope which is `downtown’, and two of our parishioners were critical figures in supervising its construction.

The Weirton Christian Center uses Evyenia’s House of Hope for many functions. Its primary use is A Place for Rebuilding Families. The home has rooms that can be used for supervised visitations, counseling space, life skills classes (including a fully functioning kitchen), parenting classes, drug abuse education, and meeting rooms for small groups. The Catholic Charities rents space in the home. During prom season, in the basement where Yiayia washed her clothes and cleaned the vegetables from her garden, The Weirton Christian Centers gathers and then presents donated prom dresses which are displayed so young girls who don’t have a prom dress or the money for a prom dress can come to pick out one to wear.

Speaking to the National Herald, Kim Weaver Executive Director of the Weirton Christian Center, said that, “the Weirton Christian Center was started by a Baptist missionary in 1917. This was the same year that Weirton Steel hired 13,000 people, mostly those from other countries – as many as 30 different ethnicities were represented. There was a very large Greek population and there is so much history, as the Center is more of a community center. It was the place for immunizations, English-speaking classes, and citizenship classes. In our 104th year, and the third location, we are still serving the community – with a focus on children – their physical, mental and spiritual well-being. We offer a free Preschool and Afterschool program, serving over 200 children annually, with 82% of their families in the 50% and below poverty level. The area we live in is very high in drug abuse and gambling, leading to many broken families. At our Christian Center on Elm Street, we had a small upstairs room that we offered to our families who were separated and needed a place to visit their children – separated through the system from divorce, rehab, jail, etc. It was very crowded but the only private place in town.”

Weaver explained that “then, in 2015, Michael Psaros gifted us with his grandmother’s home on Orchard Street – just two blocks away. Although we needed more space for programming, it was the perfect solution for supervised visitations. The house was in perfect condition and nicer than what many of our children were used to. We were able to have three separate rooms to be used at one time, if necessary, to accommodate other supervisors from different agencies. One agency, Home Base, rents office space for all their area supervisors to use, and the others use it as needed. From this, we also developed a partnership with agencies that wanted to serve our families. Both Catholic Charities of West Virginia and the Ohio Valley Sexual Assault Help Center rent office space on the second floor of the house. Being in the downtown neighborhood gives their clients access even though they do not have transportation. These partnerships have truly made Evyenia’s a place for hope and healing. In the Basement, we also offer formal gowns for those young ladies who would like to go to a formal dance but do not have the funds to purchase a new dress. Over 400 dresses were donated to us when a local store moved to Wheeling. We rent them for the cost of cleaning them, or let them keep them for a small fee.”

Asked about preparations for the visit and blessing of to Evyenia’s House by Patriarch Bartholomew, Weaver said, “we are all very excited to have His All-Holiness visiting Evyenia’s House of Hope! Of course, we are sprucing things up at the House of Hope to be the best it can be for him, and our children are working on a Welcome Banner. We hear that he loves children! We are so fortunate to have him come to bless the house, where so many families are affected, in so many ways. I believe that everyone who knows is totally amazed that he will be coming to our small town. This is a tremendous blessing for the family, and for our ministry.”

Speaking about the Psaros family, she said, “the Psaros family has been unbelievably generous to the Weirton Christian Center, even besides the wonderful gift of the house. They contributed to our Building Fund more than once, and since we have been in our new building, they have contributed to our program for children, every year. We are truly blessed that they have a heart for our mission, our kids – and the hometown has so much history for them.”