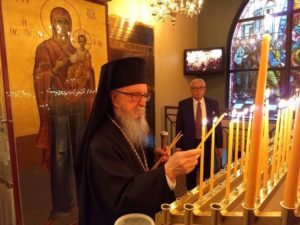 BOSTON – His All Holiness Ecumenical Patriarch Bartholomew during the Synodic meeting at the Phanar today urged His Eminence Archbishop Demetrios Geron of America to willingly submit his resignation. It is the second time that the Patriarch is calling Archbishop Demetrios to resign. The previous time was at the end of May 2018.

According to exclusive information of The National Herald, Ecumenical Patriarch Bartholomew reportedly told Archbishop Demetrios officially during the Synodic meeting the following: “You have done a notable archpastorship all these years, but now at the end of your ministry, you put yourself in danger to embarrass yourself. I call upon you to think not only about your personal posthumous fame and dignity, but also to think about the prestige of the Church, of what I had told you in the previous Synodic meeting, and to act accordingly.”