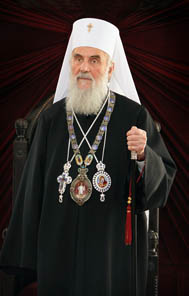 On Friday, September 11, 2015, the Board of Trustees and Faculty of St. Vladimir’s Orthodox Theological Seminary will bestow a Doctor of Divinity degree, honoris causa, upon His Holiness Irinej (Gavrilovic), archbishop of Peć, metropolitan of Belgrade-Karlovci, and patriarch of Serbia. Patriarch Irinej will also deliver a presentation titled “Theology as a Hope for the Future of the Church.”

The patriarch will arrive on the seminary campus, briefly visit Three Hierarchs Chapel, and then proceed to the Academic Convocation. The public ceremony will be held at 6 p.m. in the Metropolitan Philip Auditorium of the John G. Rangos Family Building, and will include a Q & A session between the patriarch and attendees. An open reception will follow.

His Holiness Irinej, the 45th Patriarch of Serbia, was enthroned in his position on January 2010. His Holiness was ordained as a Hieromonk in 1959, and was both a professor and rector ofPrizren Seminary. He also served as Bishop of Moravica and Nis prior to his election as patriarch.