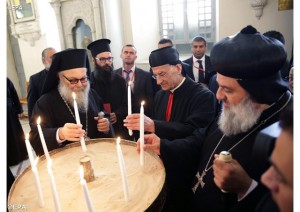 This martyr Church has known episodes of persecution in its history of emigration, and even more recently, with the tragic events verified in Syria and Iraq. The Archbishop of the Syrian Orthodox Church of Aleppo, Mar Gregorius Yohanna Ibrahim, together with Bishop Paul Yazigi, of the Greek-Orthodox Church of Aleppo, were kidnapped two years ago, on 22 April 2013, in the peripheries of Aleppo. The Syrian Orthodox Church has already undergone a tragedy of Sayfo (Spada), when half a million Syrians were killed at the end of the First World War; which took place at the same time as the violence against the Armenians.

The Syrian Orthodox Church, among the eastern Orthodox Churches, is very close to the Catholic Church. The common declaration signed by Pope John Paul II and Patriarch Mar Zakka I Iwas in Rome (23 June 1984) recognized that the two parties profess the same faith in Christ and attributed the divergence in Christological terminology to cultural diversity. In November of 1993, the Joint Theological Commission of the Catholic Church and the Malankara Syrian Orthodox Church drew up an agreement on inter-religious marriage, known today as the “Kerala Contract.” This agreement was approved by Pope John Paul II and the Patriarch on 25 January 1994, and was accompanied by a series of pastoral directives.

The Patriarch will meet with Pope Francis on Friday, who share a moment of prayer together on Friday 19 June. He will also have a meeting at the Pontifical Council for the Promotion of Christian Unity, and will make a visit to the tomb of St Peter.