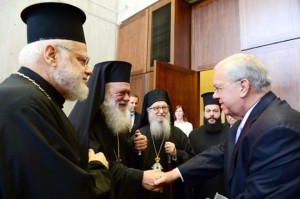 BOSTON – His Beatitude, the Archbishop of Athens and All Greece, Ieronymos II, who is making a historic visit to the Greek Orthodox Archdiocese of America and will receive an Honorary Doctorate from Holy Cross School of Theology, completed the second day of his visit in Boston by officiating at the Vespers service in the chapel of the School of Theology in Brookline, Massachusetts.

Earlier in the day, His Beatitude accompanied by Archbishop Demetrios of America, Metropolitan Methodios of Boston, and members of the delegation from Greece met with the Mayor of Boston Thomas Menino at his City Hall office.  Metropolitan Methodios introduced Archbishop Ieronymos, Archbishop Demetrios and the delegation to the Mayor and discussed the program and events of the visit.  Mayor Menino, a Philhellene and supporter of the Greek American community in Boston, stated it was an honor for His Beatitude to visit Boston and his office, and he expressed gratitude for the contribution of the Greek Orthodox community to the life and progress of the city.  He mentioned specifically the work of Metropolitan Methodios, and stated that Hellenism and Orthodoxy were worthily represented throughout New England.

In the afternoon, Archbishop Ieronymos and his delegation visited Harvard University, where they were welcomed by the Marshal and Director of International Studies of the University, Jackie O’Neill, by the Director of the Center for European Studies, Elaine Papoulias, and by Professor Elizabeth Prodromou.  This was followed by a tour of various campus buildings, and Archbishop Ieronymos signed the book of official visitors.

Later in the afternoon, as the bells of the chapel of the Holy Cross, which overlooks the campus of Hellenic College and the School of Theology, rang joyfully, the administrators, staff and students of the only Hellenic university in America welcomed with love and honor the Primate of the Church of Greece.

“It is a great blessing from God, and a pleasure and honor for us to be in your presence today, as this is the first time an Archbishop of Athens and All Greece has visited this sacred place,” stated His Eminence Archbishop Demetrios of America, the chairman of the Board of Trustees of the School, as he welcomed Archbishop Ieronymos at the main building of the campus together with President Nicholas Triantafilou, the trustees, deans, faculty, and students of the School.  His Beatitude expressed his appreciation and gratitude for the invitation and the honor, and he emphasized that “the responsibility of all of us is tremendous,” and stated that “our homeland has need of assistance from each one of us.”

Following, Archbishop Ieronymos officiated at the Vespers service in the Chapel of the Holy Cross, and he offered words of love and paternal guidance to the graduating students of the School and Hellenic College. He also presented the pectoral cross of the School to each of the students graduating tomorrow from the School of Theology. The day concluded with a dinner given by the School in honor of His Beatitude at the nearby Cathedral Center.

Visit the photo gallery for these events at http://photos.goarch.org/main.php?g2_itemId=7679  and the home page of the Archdiocese www.goarch.org.