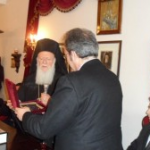 The Aristotle’s University of Thessaloniki is taking an active part in reviving the Theological School of Halki in Istanbul. This trend has been supported by 30 professors of the Greek University, who will provide the Ecumenical Patriarchate with their knowledge and know-how (in terms of research and study) in order to propose alternative methods of rebuilding and renovating the School.

This is a joint initiative of the University’s Deanery and the Technical Sciences Department of the University, which was officially announced during the meeting of Dean Yannis Mylopoulos with the Ecumenical Patriarch Bartholomew in Fener.

Reason for this meeting was the presentation of a special scientific volume entitled “Is Martyrion tis Ethnesi” (According to the national testimony) paying tribute to the 20th anniversary of His Holiness Bartholomew from rising to the Orthodox Throne of Fener.

The publication was made under the auspices of the Theological Department of the University in Thessaloniki, while the meeting was also attended by a delegation from the Greek University and Professor Mr. Michalis Tritos.

“This new initiative of the University to restore the Halki building without any charge, is just another proof of the excellent relations between the Aristotle’s University and the Ecumenical Patriarch. It is a project of great significance for both the Greek nation and Orthodoxy” pointed out Mr. Mylopoulos.