[ditty_news_ticker id="27897"] Was Putin behind the Downplaying of the Holy and Great Council? - Orthodox Christian Laity 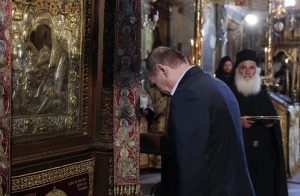 Russian President Vladimir Putin bows in front of an icon of Virgin Mary as he visits the church of the Protaton, dedicated to the Dormition of the Virgin, in Karyes, the administrative center of the all-male Orthodox monastic community of Mount Athos, northern Greece, Saturday, May 28, 2016. Russian President Vladimir Putin has arrived at the northern Greek peninsula of Mount Athos, on a visit to the autonomous Orthodox Christian monastic community. (Alexandros Avramidis/Pool Photo via AP)

The Holy and Great Council (HGC) of the Orthodox Church, which was held in Crete in June, left its mark on Church history. It was an event of great ecclesiastical importance and perpetuated a vision that has existed for many decades. The key consideration is that it managed to gather the local Orthodox Churches, even with four abstentions – specifically, the Patriarchates of Antioch, Bulgaria, Georgia and Moscow.

Orthodox Church unity became an ontological reality and was evident during the concelebrations of the ten Primates and their delegations of bishops, priests, and laity. They joined together and coexisted as brothers, and the Eucharistic Synaxis was officiated by Ecumenical Patriarch Bartholomew, who was given the privilege to preside over the Council.

Undoubtedly, the HGC’s “sore spot” were the four absentees, and it was mostly a disgrace for the Churches they represent, because they have inadvertently been considered a caste division of the Body of Christ, i.e., the Church. The excuses they invoked were borderline frivolous and were a source of amusement for serious and objective observers and analysts.

Of course, the HGC proceeded without them, who ultimately proved to be “insignificant” compared to the major salvaging event of the Church and deigned to be isolated and excluded from the “whole” of the Body of Christ.

Meanwhile, systematic and desperate attempts by the mainstream media were made to mislead and degrade the HGC; the press almost completely ignored the HGC as if they had been given a general guideline, and the smaller and uninfluential media outlets confined themselves to mindless defamation.

The fact that a group of students from the Holy Cross theological school in Boston, who voluntarily helped in the orderliness and proceedings of the Synod, were deemed “American policemen” or “CIA agents” is indicative of the climate that was cultivated, while the targeting was not so subtle.

Of course, the level of ecclesiastical reporting in Greece as well as the rest of the Balkans, has not been brought to our knowledge.

Then there was this small caste of dissenters, comprised of three or four Metropolitans, a few head priests, and laity, who shamelessly and relentlessly condemned and rejected the Council before it even convened. Absurd behavior.

On the other hand, the Greek government’s attitude could be characterized as questionable and even suspect from the beginning. On May 28, two weeks before the Council convened, the Tsipras Administration grandly welcomed Russian President Vladimir Putin and his entourage, as well as Patriarch Krill of Moscow, who by strange coincidence chose to visit Greece and Mount Athos just a few days before the HGC began.

The reception of Kirill was highly honorable, and the manner in which Putin was greeted bordered on profane, since the Athonites sat him onto the Archiepiscopal Throne. He was accompanied by undesirable colleagues, such as Vladislav Surkov, against whom the United States and the European Union have imposed sanctions for his role in the Russian invasion in the Crimea and the Ukraine.

Surkov visited Mount Athos although the Greek government was fully aware that it violated agreements with the European Union. An extensive article featured in Time magazine on September 2 made some interesting revelations regarding his visit.

For an event of the HGC’s calibre, neither Prime Minister Tsipras, nor religious affairs Minister Nikos Filis appeared even for a few minutes to obligingly and kindly welcome the Primates of the local Orthodox Churches and their delegations. The downgraded representation of the government was assigned to the Deputy Minister of Foreign Affairs Ioannis Amanatidis. The latter had even propagated that Minister of State Nikos Pappas would attend the closing Synodal Divine Liturgy in Kissamos, but he ultimately did not appear.

There is widespread feeling that the Tsipras government was under great pressure from Putin to “bury” the HGC, which in turn, as is evident by the developments, threw a black veil on the publicity of the HGC even by the state-owned and state-run channel ERT.

Of course, Greek President Prokopis Pavlopoulos was present at the Divine Liturgy of the Sunday of the Pentecost in Heraklion, after which he hosted a luncheon in honor of Bartholomew and the other Primates.

THN was informed that that the head of Pavlopoulos’ press office did not show up, but instead another officer had the president’s speech on a piece of paper and refused to release it to the HGC’s press office.

In addition, the Greek president had requested the presence of the Evzones of the Presidential Guard, as is done in other events and specifically in the Greek Independence Parade in New York, but the request was completely ignored.

Meanwhile, two weeks before the HGC convened, the effort and targeting of the Moscow Patriarchate to completely scuttle the Council was clearly revealed when under various pretexts it called for its postponement for a later date, although it had agreed and had signed the Pre-Conciliar documents. Furthermore, HGC’s venue, which was initially set and decided upon unanimously, was changed from Constantinople to Crete for the sake of Kirill, who declared that he was unable to travel to Constantinople due to the tense relations between Turkey and Russia at the time, in response to the Turkey’s downing of a Russian fighter plane.

Moscow dragged along the Patriarchates of Antioch, Bulgaria, and Georgia, although there is “historical hatred” with the latter.

Its aim was to postpone the Holy Council, which would enable the Moscow Patriarchate to “comanage” and share the responsibility for this leading position of Orthodoxy, which is a historical and canonical ecclesiological privilege of the Ecumenical Patriarchate.

It would not be surprising if it transpires that this ecclesiastical-political game aims to radically change the existing institutional framework and the scheme of the Orthodox Church, given the Moscow Patriarchate’s thirst for power. And through this state of “civil war,” the faithful, and mainly the young people, are seeking to discern Christ.