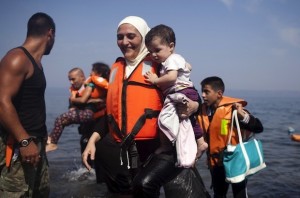 A Syrian refugee holds a child moments after arriving on a dinghy on the Greek island of Lesbos, September 3, 2015. Greece will ask the European Union for about 700 million euros to build infrastructure to shelter the hundreds of refugees and migrants arriving on its shores daily, the government said on Thursday. The cash-strapped country has seen a rise in the number of refugees and migrants — mostly from Syria, Iraq and Afghanistan — arriving on rubber dinghies from nearby Turkey. REUTERS/Dimitris Michalakis

On September 11, the Primate’s World Relief and Development Fund (PWRDF), the Anglican Church of Canada’s relief and development arm, announced that it had donated $20,000 to Action by Churches Together (ACT) Alliance to help provide aid to Syrian refugees in Hungary, Greece and Serbia.

While PWRDF has been raising money to provide aid to Syrian refugees since 2012, it has focused on the three million refugees currently residing in countries near Syria: Jordan, Lebanon, Turkey and Egypt. This will be the first time that PWRDF has dedicated money to help nearly 300,000 refugees seeking asylum in Europe. It is doing so in response to an appeal from ACT Alliance, a global coalition of over 140 churches and faith-based organizations

The donation will go toward food, water, shelter, health care, sanitation, education and psycho-social support as well as warm clothing and bedding to help refugees get through the winter. Three ACT Alliance members—International Orthodox Christian Charities, Hungarian Inter-Church Aid, and Philanthropy Charitable Foundation of the Serbian Orthodox Church—are working on the ground in the Balkans.

“There is a need we can concretely respond to through the ACT Alliance,” said Simon Chambers, PWRDF communications co-ordinator.

While PWRDF has an active fundraising campaign for Syria, the money for the donation came from the general operating funds because the money that has come in “has already been spoken for,” according to Chambers. He hopes donors will continue giving to PWRDF’s Syria Response campaign to help pay for the donation. PWRDF started receiving funds for the Syrian refugee crisis in January 2012; as of September 4 this year, it has received a total of $80,155.

While media attention has focused on Syrian refugees, ACT Alliance is also helping others who have fled war, persecution and conflict, Chambers stressed. These include refugees from Afghanistan, Eritrea, Iraq and Somalia, according to an ACT Alliance press statement.

“Globally, [there are]about 60 million refugees right now, according to the United Nations High Commissioner of Refugees,” Chambers said. “Four million Syrians—that’s less than 10% of the refugees in the world.”

Chambers voiced concerns over how the sudden interest in Syrian refugees triggered by the photograph of three-year-old Alan Kurdi, who died trying to cross the Aegean Sea earlier this month, will affect initiatives to help asylum-seekers from camps in countries such as Burundi or India.

“If Canada accepts 10,000 refugees—which is the number that the government has put forward right now—well, Canada has a cap on refugees of a maximum of 14,000 refugees per year being resettled,” he said, pointing out that this leaves only 4,000 spots for non-Syrian refugees.

The government has announced that it will respond to the crisis in other ways, however  pledging on September 12 that it would match dollar-for-dollar donations to registered Canadian charities, of which PWRDF is one, until the end of the year.