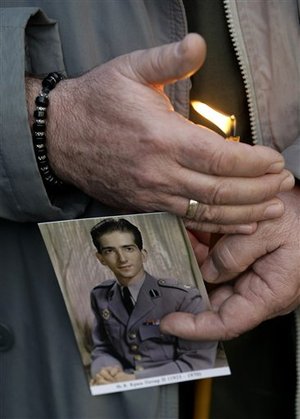 A royalist supporter holds up a candle and picture of Yugoslavia’s last king — Peter II Karadjordjevic during a solemn ceremony in Belgrade, Serbia, Tuesday, Jan. 22, 2013. The former king fled the Nazi occupation of Yugoslavia at the start of World War II and never returned, as Communists took over at the end of the war. He died in exile and was buried at a Serbian Orthodox monastery in Libertyville, Illinois — the only European monarch buried on U.S. soil.
– Darko Vojinovic /AP Photo

The remains of Yugoslavia’s last king – Peter II Karadjordjevic, who died in the U.S. in 1970 – were flown back to Serbia in a solemn ceremony on Tuesday, despite protests by some Serb royalists in America.

The former king fled the Nazi occupation of Yugoslavia at the start of World War II and never returned because Communists took over at the end of the war. He died in exile at the age of 47 and was buried at a Serbian Orthodox Church monastery in Libertyville, Illinois – the only European monarch laid to rest on U.S. soil.

His son – Crown Prince Alexander, who lives in Belgrade – wanted the remains returned to Serbia. That reportedly upset some Serbian-American groups, who claimed the remains were being secretly exhumed and that before the king had died he asked to remain buried in the United States.

However, Alexander said in a speech at the Royal Palace in Belgrade on Tuesday that his father wanted to return to his homeland and his people, “whom he loved more than anything else.”

“He spoke of that often, every time the two of us were together,” Alexander said after the flag-draped casket was brought into the palace’s chapel where the head of Serbia’s Orthodox Church Patriarch Irinej said a prayer.

“We brought the king back to his land,” said Alexander, who has called for the return of the monarchy in Serbia. “Welcome back, father!”

Several dozen royalist supporters – some dressed in old Serbian uniforms – held candles, flowers and photos of Peter during the ceremony.

The government’s full support of the decision to return the king’s body to Serbia was obvious at the ceremony, whose guests included Prime Minister Ivica Dacic along with other state officials and their guests.

Even though Peter was born into a royal family, and his godfather was Britain’s King George VI, his life was often tragic and chaotic.

He was only 11 years old when his father, King Alexander I, was assassinated in 1934 in Marseilles, France. For the next six years the boy’s powers were in the hands of a three-man regency headed by his uncle, Prince Paul.

In March 1941 Prince Paul was overthrown in a military coup after signing a pact with Germany. Peter, then 17, was made the king by the Serb anti-fascists.

But when Germany invaded Yugoslavia in April 1941, Peter was forced to flee, first to Greece, then to Egypt, then to Britain, where he headed the government-in-exile. He later lived in France and ended up in the U.S.

History books portray him as a figurehead leader and a victim of cunning politicians.

On Tuesday, Serbian officials hailed the return of Peter’s remains as the way to help unify their nation, which has remained deeply divided between pro- and anti-royalists since World War II.

“Serbia has a long tradition and history,” said Oliver Antic, an adviser to nationalist Serbian President Tomislav Nikolic. “Now, even the countries that have no sympathy for us will see how strong is the tradition of this nation.”

A formal burial ceremony for King Peter II is planned for later this year.

Dusan Stojanovic contributed to this report.