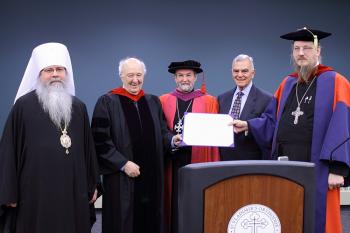 Princeton University’s Philip and Beulah Rollins Professor of History Emeritus Dr. Peter Brown presented the 30th Annual Father Alexander Schmemann Memorial Lecture to a standing room only crowd in the Metropolitan Philip Auditorium of the John G. Rangos Family Building. Titled “Constantine, Eusebius, and the Future of Christianity,” the presentation focused on how Christians understand the historical period of late antiquity in which the Emporer Constantine and the historian Eusebius stand out as central figures.

Dr. Brown presented his lecture with humility and humor. “It’s a great honor to find myself here, and a great joy, an occasion to repay the debt that I’ve long owed the outstanding members of this Seminary. Father Schmemann combined an infectious sense of the timeless joy of the kingdom of Christ with an equally acute sense of history.” The historian then described the backdrop of the 4th century era and noted that Christians who came after the towering figures of Constantine and Eusebius often erred in projecting backwards their own “images of Christianity which belong to a later period,” rather than understanding the unique times in which both of these men lived.

Some of the characteristics of the Christian mindset of this era, Dr. Brown explained, were a conviction that paganism did not pose a threat to Christianity, a passion for the “exaltation of the Church,” and a “thin universalism” that did not envision the Christianization of the Roman Empire per se, but rather welcomed the possibility of the inclusion of all people who would choose to embrace the Christian faith.

Noted Dr. Brown, “the strength of the Church is not in the past, present, or future, but in Christ.” Additionally, he said, the freedom as Christians to speak aloud and be heard, and to exalt our faith through our liturgies and our places of worship, is in itself “a huge virtue” to be appreciated and cherished.

Before the lecture began, the faculty processed in full academic regalia, and Chancellor/CEO The Very Rev. Dr. Chad Hatfield warmly welcomed guests to both the Academic Convocation and Schmemann Lecture. Dr. John Barnet, associate dean for Academic Affairs, then read a citation summarizing Dr. Brown’s accomplishments. Among other things, the commendation noted that he is a “writer of elegant prose, opening up to us the cultures of the early Christians, enabling them across the centuries to speak to us today.” At this time, Dr. Barnet, as the representative for the Seminary’s Board of Trustees and faculty, awarded Dr. Brown the Doctor of Divinity, honoris causa.

Following the awarding of the honorary doctorate, The Very Rev. Dr. John Behr, dean of St. Vladimir’s, introduced Dr. Brown’s lecture by noting that “Fr. Schmemann was always looking beyond the campus to speak to the broader world.

“Today,” he continued, “we have the good fortune to hear from someone who has not only worked in the field of history but also has redefined that discipline…late antiquity is now not seen as a period of decline and fall, but rather as a period of great creative distinctive and decisive significance.”

An array of distinguished guests attended the lecture, including His Beatitude The Most Blessed Tikhon, primate of the Orthodox Church in America (OCA), The Rev. Msgr. Peter Vaccari, rector of St. Vladimir’s sister seminary St. Joseph’s, and members of the Board of Trustees who had concluded their series of meetings just hours prior and had stayed on the Yonkers campus to enjoy the presentation by the erudite and renowned scholar.

An outstanding scholar, Dr. Brown is credited with having virtually created the field of study referred to as “late antiquity” (A.D. 250–800), the period during which Rome fell, the three major monotheistic religions took shape, and Christianity spread across Europe. A native of Ireland, Professor Brown earned his B.A. in history from Oxford University (1956), where he taught until 1975 as a Fellow of All Souls College. He joined the Princeton faculty in 1986 after teaching at the University of London and the University of California, Berkeley. Professor Brown’s primary interests are the transition from antiquity to the Middle Ages and the rise of Christianity, and he has pursued them through investigations into such diverse topics as Roman rhetoric, the cult of the saints, the body and sexuality, and wealth and poverty.

Traditionally hosted in January on the Feast of the Three Hierarchs, the Schmemann Lecture has been a high point of St. Vladimir’s academic year since 1984. Over the years, outstanding theologians and church leaders such as Protopresbyter Boris Bobrinskoy, dean of the St. Sergius Theological Institute in Paris; His Eminence Archbishop Demetrios, primate of the Greek Orthodox Archdiocese of America; and His Eminence, The Most Rev. Hilarion (Alfeyev), metropolitan of Volokolamsk and chairman of the Moscow Patriarchate Department for External Church Relations, have touched upon a wide range of subjects from theological themes, music, liturgy and Christian history.

Dr. Brown concluded his lecture to vigorous applause, after which a lively question and answer session ensued. The singing of “It is Truly Meet” concluded the formal portion of the evening, and then guests enjoyed an array of refreshments prepared by Chef Nat Fasciani and Special Events Coordinator Tatiana Penkrat. The Convocation and Schmemann Lecture officially launched the 75th anniversary year of the Seminary, founded in 1938, and will be followed by other Jubilee events.

A photo gallery is available at www.svots.edu/category/image-galleries/jan-2013-dr-peter-brown-schmemann-lecture-l-parrott.