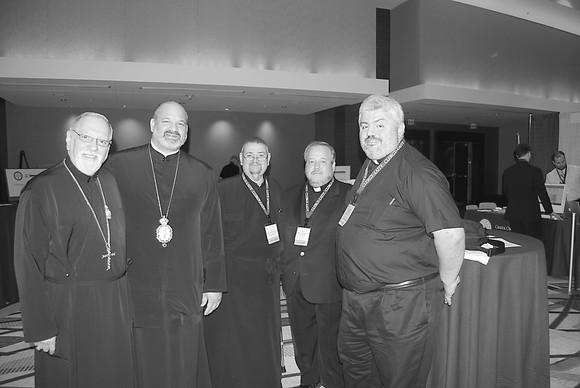 BOSTON, MA – A newly-assigned priest that has just graduated from the Seminary should make an annual salary of $49,128-$66,528 plus extra benefits such as insurance, an automobile, a house (or an allowance for one) retirement contributions, seminars expenses, among other ones. A priest with 35 years of ministry and more will earn $113,856-$120,144, according to the Clergy Compensation Plan for 2013.

The priests’ salaries are the biggest expense of the parishes’ annual budgets, along with the annual monetary allocation they pay to the Archdiocese for what are called ministries.

According to documents acquired by TNH, “in light of the continuing difficulties being faced by so many of the faithful and parishes, the remunerations ranges will remain the same for the year 2013.” TNH has learned that in many parishes the income has degreased sharply.

The Plan also provides that: “a) the annual minimum increase in a clergyman’s remuneration must include an annual cost of living increase beginning January 1st of each year. When using these remuneration ranges, the Parish Council should factor in the relative cost of living for its geographic area”.

b) “In the event a parish provides ‘housing’ by making available a parish owned home, then an equitable and reasonable ‘deduction adjustment’ should be made from the Salary and Housing Allowance figures above, based on the local fair market rental value of the home being provided.”

The plan also provides that “in addition to the above, the parish must provide:

1) an automobile (which the parish purchases or leases) for use by the priest, with all related expenses paid by the parish.

4) A minimum annual vacation of 15 days (two weeks) to a maximum of five weeks, taking into consideration the clergyman’s cumulative years of service to the Archdiocese.

6) A three-month sabbatical leave for every six years of service with the same parish.

It is stated in the Compensation Plan that “all parishes are obligated to pay the monthly Archdiocese Benefits Contribution, which for the year 2013 is $500. This includes parishes without a full-time priest. Those parishes with more than one clergyman are required to pay $500 for each assigned clergyman…The Archdiocese Benefits Contribution is not a part of a priest’s remuneration package.”

The above salary scale is not always observed by the local Metropolises. In many parishes there are huge differences of salaries and benefits. Some Metropolitans in order to take care “their own boys” as the expression goes, put pressure on the parishes to give them more money, in some instances even double the amount that the Archdiocesan salary scale directs. Generally in Metropolises, it is the metropolitan, not the chancellor, that selects a priest. In many cases, the unwritten laws of friendship and favoritism prevail over education, experience, and overall ability.

In other instances, the metropolitans turn their heads the other way. TNH has learned that there are priests with 50-plus years of continuous service in the same parish whose annual salary does not exceed $50,000, while some newly-appointed priests begin at $80,000. The priest in the Archdiocesan Cathedral of the Holy Trinity in New York, appointed by Archbishop Demetrios, earns the highest salary of any priest in the country, plus benefits, while other clergy live below poverty line.

All family benefits that apply to married priests with children, also apply to the celibate priests – Archimandrites or priest-monks. It is also true that many priests’ salaries is in some instances double and triple the $80,000 (approximate) salary of the metropolitans. All of metropolitans’ expenses are paid.

It is widely known that the Greek-Orthodox Clergy in the United States are the highest paid among the Orthodox Jurisdictions. One of the basic reasons that so many converts are trying to get into the Greek-Orthodox Archdiocese as priests is the fact that the Archdiocese is considered “the golden fish” of Orthodoxy in terms of salary and benefits.

Above and beyond the basic employment package are gratuities, “tyhera,” which the faithful give at the time of a sacrament – such as wedding or baptism, or even at a funeral. The gratuities are similar to the tips that the customers give to waitstaff in restaurants or hotel bellhops. There are parishes that present to the faithful their financial obligations in writing once the people call or visit the church office to set a day not only for a joyous occasion, but even for the funeral of a loved one. The faithful are asked to give an extra amount to the priest, the cantor, the sexton, and for the use of the church despite the fact that the faithful pay annually their dues or stewardship.

In many instances, the priests have asked to include their “tip” in the general expense of the funeral, as determined by funeral directors. There are also cases in which the relatives of the departed in their grief and deep pain approach the priests and give them an extra “tip” in cash which they take it without telling the relatives that they have already been paid a “tip” through the funeral director.

The custom of gratuities applies to many hierarchs who get from $500 to $1,000 and even higher when they officiate in Vesper Service or in a Liturgy. They might not ask for it directly, but the priests play the intermediate role recommending to the parish council to “give something to the bishop,” and they also are given such tips for officiating at weddings, baptisms, and funerals.

The priests and the Bishops in Greece are paid by the government and they are considered state employees. According to the documents acquired by TNH from the Greece’s State Treasury, the gross salary of a newly-ordained priest is 1,092 euros and the net is about 770. A priest with 10-year ministry earns 1,381 in gross and 1,032 net.