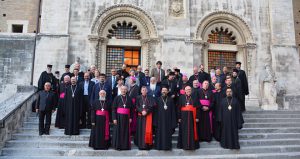 WASHINGTON—The North American Orthodox-Catholic Theological Consultation (NAOCTC) has released its response to the most recent document produced by the Joint International Commission for Theological Dialogue between the Roman Catholic Church and the Orthodox Church. Entitled, “Synodality and Primacy During the First Millennium: Towards a Common Understanding in Service to the Unity of the Church,” this work of the international dialogue was released in September 2016. It is often referred to as, “The Chieti Document,” because it was finalized during a meeting in Chieti, Italy.

The NAOCTC, which is co-chaired by Cardinal Joseph W. Tobin, Archbishop of Newark and Consultant for the U.S. Bishops’ Committee on Ecumenical and Interreligious Affairs, and by Metropolitan Methodios of Boston, prepared its response during its most recent meeting, which took place in Washington, DC, from 26-28 October. The response praises the Chieti Document “as the fruit of perseverance in fidelity to our one Lord.  It is a fruit holding many seeds, potentially yielding a harvest for the countless members of our Churches who experience the division every day in their lives and pray for it to be healed.”

The Chieti Document discusses the relationship between primacy and synodality during the first millennium Churches of the East and West. It specifically examines that relationship on three levels: the local, regional and universal. The NAOCTC response reflects upon each of the three levels and offers suggestions for further study and consideration.

The Chieti document is posted on the Vatican web site and on the web site of the Ecumenical Patriarchate:

The response document produced by the Joint International Commission for Theological Dialogue between the Roman Catholic Church and the Orthodox Church can be found here:

More information on the work of the North American Orthodox-Catholic Theological Consultation, including links to the full text of Statements and other documents, may be found at the respective sites of: