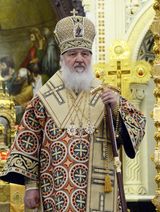 MOSCOW (Reuters) – The head of the Russian Orthodox Church told newly elected Pope Francis on Thursday they must act together to defend Christians persecuted in some parts of the world and promote traditional values against secularism.

“Orthodox believers and Catholics need to join forces today to safeguard Christians in need of support and sympathy, subject to pressure and persecution in different parts of the world,” Patriarch Kirill wrote in a congratulatory note to Francis.

Francis, born in Argentina, is the first non-European pope in 1,300 years and takes over the 1.2 billion Catholic Church mired in intrigue and scandal after his predecessor, the German-born Benedict XVI resigned unexpectedly in February.

The head of the Russian Orthodox Church’s Department for External Relations, Metropolitan Hilarion, on Thursday reiterated any such meeting could only take place after these issues were resolved.

“Such a meeting is possible but the place and timing will depend on how quickly we will overcome the consequences of the conflicts from the turn of 1980s and 1990s that have taken us way back in terms of the Orthodox-Catholic dialogue,” he was quoted as saying by the Itar Tass news agency.

The Russian Orthodox Church, resurgent since the 1991 collapse of the Soviet Union, now counts some 165 million people in ex-Soviet countries and other states among its flock.

Kirill, who became the patriarch in 2009, also has fostered close ties with President Vladimir Putin.

During his 13 years of rule over Russia, the former KGB spy has walked a thin line between promoting Russian multi-religious traditions and embracing the Russian Orthodox Church as the carrier of national values.

The Kremlin and the Russian Orthodox Church have both condemned a protest last year that saw Pussy Riot punk rockers storm the altar of a sacred Orthodox cathedral with a profanity-laced song against close ties between Putin and Kirill.

Moscow has also cited concerns about violating the rights of Christian minorities among reasons for its reluctance to back the Arab Spring popular revolts, including in Libya or Syria, which, it says, tend to play into the hands of Islamic radicals.