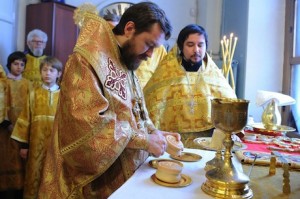 There’s a quaint Anglican concept of the universal Church known as the “branch theory”. This claims that there are three main branches to apostolic Christianity: Roman, Orthodox and Anglican. It’s much favoured by Church of England clerics who aren’t very keen on “Romans”, as they call Catholics, and convey their anti-Papist sentiment in pro-Orthodox code, forever banging on about the riches of Byzantine spirituality, the mystical power of icons, etc. Richard Chartres, the Bishop of London, is an example of this breed.

What these pro-Orthodox Anglicans don’t stress is that ordaining women priests was just as great an obstacle to unity with Constantinople and Moscow and it was to unity with Rome. And women bishops? Metropolitan Hilarion, head of ecumenical relations for the Moscow Patriarchate, delivered a pretty blunt message to the new Archbishop of Canterbury last weekend (H/T Gillibrand):

The introduction of the institution of female bishops will lead to the elimination of even a theoretical possibility of the Moscow patriarchate recognising the church hierarchy of the Anglican church, the communications service of the Department of External Church Relations reported on Saturday.

Even a theoretical possibility, note. This is exactly the same message coming from Rome (please don’t kid yourself that a change of Pope will make any difference). Of course, Hilarion’s warning won’t stop the C of E eventually ordaining women bishops, but let’s be clear about the consequences: the Orthodox Churches, following the lead of Moscow, will finally conclude that the Church of England is a protestant denomination with High liturgical trappings but outside the apostolic succession. Cue creaking of timber as the branch theory falls apart.