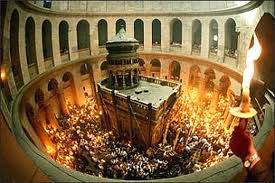 There is among the Orthodox a very widespread belief that the Christian celebration of Easter must necessarily come after the Jewish Passover. This chronological order is considered imperative and bears a symbolic meaning, as it is believed to have been decreed by the First Ecumenical Council held at Nicea in 325. This belief is stated and reaffirmed in the 12th century by the Byzantine canonist Zonaras. Another famous canonist of the later Middle Ages, Matthew Blastaris, in summing up the opinions of his time on the Paschal question, included among the rules for determining the date of Easter that it must not coincide with the Jewish Passover. We find this also in the writing of the learned canonist of the present century, Nicodemus Milash.

Yet, not only is such a stipulation totally absent from the decision taken on the Paschal question at Nicea, but it is foreign and, in a sense, contrary to what was then decreed. How, then, has such an opinion taken shape through the centuries?

In the primitive Church, there was no need for computing the date of Easter independently of that of the Synagogue, by which the Passover was determined. The controversy that brought, toward the end of the second century, the Churches of Asia Minor and the Church of Rome into opposition did not concern this point. The matter in dispute was quite different: the Asians celebrated Easter on the 14th of the month Nisan, whatever the day of the week, while the other Christians waited until the following Sunday. But both parties based their Easter date on the Jewish computation of the Passover. This computation was questioned, however, soon after the Jews changed their mode of calculating their Passover, no longer taking the vernal equinox into account.

The Bible did, indeed, specify the time the Passover should be celebrated, but it made no express reference to the vernal equinox. However, since the prescribed offering consisted of the first fruits of the harvest, a celebration prior to that time would have been inconceivable. But this empirical criterion, relative as it is to the climate conditions of that area, could hardly be preserved once the Jews lost their geographical proximity to Palestine as a result of the Roman crushing of the Bar-Bakhba revolt (approximately 135 AD). A period of uncertainty followed, and then towards the end of the second century, the rabbis established a new system which disregarded the vernal equinox. With the new system, at least once every three years the Passover fell before the equinox.

Then, many Christians wondered why they should celebrate the commemoration of the Passion and Resurrection on the basis of a computation which was no longer the one used at the time of our Lord. They also began to realize that a double anomaly might issue, that is, the Christian Easter might have to be celebrated twice between two vernal equinoxes, or not at all. Thus, there might be years with two Easters and years with no Easter at all.

As early as the third century, then, the Christians began to devise their own calculations of the Easter date. A learned Alexandrian, Anatolius (later bishop of Laodicea in Syria), used for his Easter computation the nineteen-year cycle invented in 432 BC by the Athenian astronomer Meton. However, most Churches in the region of Antioch continued to follow the computation of the Synagogue in spite of the fact that the latter no longer took the equinox into account. This on occasion caused considerable differences in the date of Easter between the Antiochian churches and others; in contrast, variations among the latter were neither frequent nor notable.

These differences promoted the question of the date of Easter before the First General Council at Nicea. This venerable assembly did take a decision on this issue. But though there have been references to a decree (in Greek honos), there does not seem to have been issued a written text of it. Thus, the document to which reference is often made is in fact a compilation of a number of authentic data. According to this kind evidence, we are able to reconstruct the decision of the first General Council on the question of Easter follows:

* Easter must necessarily be celebrated on the same Sunday by all churches.

* This Sunday must be the first after the full moon following the vernal equinox.

* The Churches that follow the Jewish calculation must abandon it and conform with the general usage.

However, there was some resistance to that decision which necessitated new injunctions: the First Canon of the Council of Antioch (around 330 AD), and the Seventh Apostolic Canon (second half of the fourth century). These canons condemned those who celebrated Easter “with the Jews.” This did not mean, however, that the dissidents were celebrating Easter on the same day as the Jews; rather, that they were celebrating on a date calculated according to the synagogal computations.

There is clear evidence that it was not a chance coincidence to which the canons referred. Indeed, on several occasions during the fourth century, after the Council of Nicea, the Jewish Passover and the Easter of most Christian churches accidentally occurred on the same day, but nobody was in the least perturbed. Besides, on account of the ever-increasing time delay brought about by the inaccuracies of the Jewish calendar, any chance of coincidence between the Christian Easter and the Jewish Passover disappeared.

As a result, the real cause that had prompted the decision of the First Ecumenical Council came to be forgotten. The belief gradually grew that the phrase “with the Jews” was to be understood literally and that the Holy Fathers at Nicea had decreed that the Christian Easter must not, even accidentally, occur on the same day as the Passover; rather, it must be celebrated later. As a matter of fact, however, such an interpretation was not only inaccurate but contrary to the spirit of what was decreed at Nicea, considering that acceptance of this interpretation necessitates a chronological relationship between the Christian Easter and the Jewish Passover, the very undesirable connection the Great Council sought to abolish.

Archbishop PETER was the bishop of the Diocese of New York and New Jersey of the Orthodox Church in America.

This article appeared first in The Orthodox Church newspaper, April/May 1994. It has also appeared in Solia.