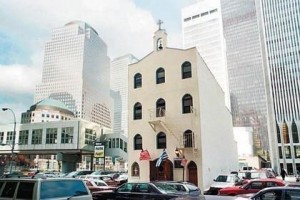 St. Nicholas was the only church destroyed in the Sept. 11, 2001 terrorist attacks on New York City. It’s taken more than a decade for rebuilding plans to proceed.

NEW YORK – A Greek-American newspaper (The National Herald) earlier this year reported that Santiago Calatrava was the frontrunner to design the rebuilt Church of St. Nicholas downtown.

The Post hears from multiple sources that the rumors are indeed true: out of a dozen finalists, Calatrava has been chosen for the project—though he hasn’t yet signed a contract, so it’s certainly possible that he’ll be out of the Archdiocese’s price range.

The rebuilding of the church has been a matter of controversy for years. The original church was destroyed on 9/11 and will be rebuilt on the former Deutsche Bank site at 130 Liberty Street, where the church and the Port Authority also signed an agreement to build a non-denominational bereavement center.

Given the delays and budgetary woes at the nearby transportation hub, also of Calatrava’s design, the architect may be an odd choice for this project. On the other hand, the church knows he can handle this kind of situation.
[subscribe2]