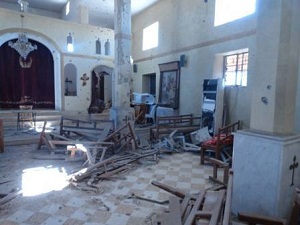 Sadad is a small town of 15,000 people, mostly Syriac Orthodox Christians, located 160 km north of Damascus. It has 14 churches and a monastery with four priests. This depicts one of the bombed out churches.

Sadad is a small town of 15,000 people, mostly Syriac Orthodox Christians, located 160 km north of Damascus. It has 14 churches and a monastery with four priests.

We have shouted to the world but no one has listened to us. Where is the Christian conscience? Where is human consciousness? Where are my brothers? I think of all those who are suffering today in mourning and discomfort: We ask everyone to pray for us. (Archbishop Selwanos Boutros Alnemeh)

SADAD, Syria (Catholic Online) – We have regularly covered the plight of Christians in Syria and will continue to do so. That is because they are our brothers and sisters. We are called to “bear one another’s burdens and fulfill the law of Christ.” (Gal. 6:2) As we evaluate the various conflicts in the Middle East it is vitally important to be informed by news sources which paint the full picture of what is happening.

Christians preceded Muslims in calling Syria their home. They must not be forced to leave this ancient and holy land. We are living in a new missionary age and there is a growing persecution of the Church on a global scale. It has different faces. Whether in the West, where the memory of Christian influence fades under increasing persecution inflicted by rabid secularism and godless materialism and nihilism, or in the East, which bleeds under the overt persecution from Jihadists, the challenge we face grows daily and cries out for both prayer, solidarity and action.

It is important for us to remember that Christians in Syria were there long before the Muslims. We have a two thousand year history in the Middle East. Syria was the home of many monks, mystics and missionaries of the Gospel of Jesus Christ. Some of the most beautiful of the Patristic writings were penned by Syrian Saints and the Liturgy and hymnody of the early Church was enriched by the worship of those same wonderful saints. Now, our brethren are shedding their blood because they profess the Christian faith. We Must Not Remain Silent!

Christians in Syria now make up less than 10% of the population. They are suffering intense, ongoing and fierce persecution. A 2012 report in the British newspaper, The Independent entitled, The plight of Syria’s Christians gives a very different assessment than we what too often read in the news in the United States. The situation facing Christians in Syria grows more urgent daily.

The reporter, Kim Sengupta, interviewed the Haddads, a Christian family which was then fleeing Homs:

We left because they were trying to kill us,” said 18-year-old Noura Haddad. She is now staying with relations in the town of Zahle in the Bekaa Valley: “They wanted to kill us because we were Christians. They were calling us Kaffirs, even little children saying these things. Those who were our neighbors turned against us. At the end, when we ran away, we went through balconies. We did not even dare go out on the street in front of our house. I’ve kept in touch with the few Christian friends left back home, but I cannot speak to my Muslim friends any more. I feel very sorry about that.”

Melkite Catholic Archbishop Archbishop Issam John Darwish told the Independent that the increase of violence against Christians is the work of Jihadists. He stated, “I have raised this with officials in the West, they must bring peace. The jihadis will not stop here, the war will spread to Europe. What will England be like in ten or 15 years?”

In October of 2012, the body of a beloved Greek Orthodox priest, Fr Fadi Haddad, 43, was found along the side of a road. He had been mutilated. His eyes were gouged out. A young mother and close family friend told Aid to the Church in Need:

My family and friends very much feel under threat. People from the area have said that extremists have gone through the streets shouting ‘Alawites to the grave, Christians to Beirut’. They want to kick us out. They say that if Christians refuse to leave they will end up in the grave like the Alawites. (a Shia sect)

Nobody seems to care what is happening to us Christians in Syria. The government we had in the past was bad but at least we were safe. At least we could walk the streets. You’d never think you might be bombed by extremists. Not anymore. Now it’s very scary. Now they are bombing churches. Look at what has happened to our churches in places like Aleppo and Homs. The extremists threaten us Christians when we want to celebrate major feasts like Christmas and Easter. They don’t want us in the area at all.

Greek Orthodox Patriarch Ignatius IV Hazim presided over Fr Haddad’s funeral Liturgy. He had ordained him to the Holy Priesthood in 1995. He called the slain priest a “martyr of reconciliation and harmony”. He added: “We strongly condemn this brutal and barbaric act against civilians, the innocent and the men of God who strive to be apostles of peace.” A bomb went off during Fr. Haddad’s funeral.

The News Service of the Pontifical Mission Society, Agenzia Fides, is one of the most reliable and consistent sources of news on the horrible, ongoing, intensifying persecution of Christians in Syria. On October 31, 2013, they published a report of a recent massacre of 45 Christians by Islamist militias. It is set forth below:

“What happened in Sadad is the most serious and biggest massacre of Christians in Syria in the past two years and a half”: this was stressed by Archbishop Selwanos Boutros Alnemeh, Syriac Orthodox Metropolitan of Homs and Hama, in illustrating to Fides the tragic death toll in the Christian town of Sadad, invaded by Islamist militias a week ago and then re-conquered by the Syrian army.

“45 innocent civilians were martyred for no reason, and among them several women and children, many thrown into mass graves. Other civilians were threatened and terrorized. 30 were wounded and 10 are still missing. For one week, 1,500 families were held as hostages and human shields.

Among them children, the elderly, the young, men and women. Some of them fled on foot travelling 8 km. from Sadad to Al-Hafer to find refuge. About 2,500 families fled from Sadad, taking only their clothes, due to the irruption of armed groups and today they are refugees scattered between Damascus, Homs, Fayrouza, Zaydal, Maskane, and Al-Fhayle”.

The archbishop continued: “There is no electricity, water and telephone in the city. All the houses of Sadad were robbed and property looted. The churches are damaged and desecrated, deprived of old books and precious furniture. Schools, government buildings, municipal buildings have been destroyed, along with the post office, the hospital and the clinic”.

“What happened in Sadad – he says – is the largest massacre of Christians in Syria and the second in the Middle East, after the one in the Church of Our Lady of Salvation in Iraq, in 2010”.

Archbishop Selwanos Boutros Alnemeh concluded: “We have shouted aid to the world but no one has listened to us. Where is the Christian conscience? Where is human consciousness? Where are my brothers? I think of all those who are suffering today in mourning and discomfort: We ask everyone to pray for us”.

Sadad is a small town of 15,000 people, mostly Syriac Orthodox Christians, located 160 km north of Damascus. It has 14 churches and a monastery with four priests.