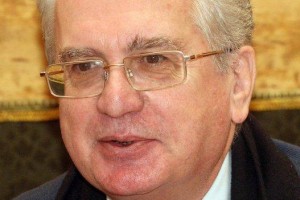 Mikhail Piotrovsky, the head of Russia’s world-famous Hermitage Museum has denounced the destruction of a renowned Soviet artist’s sculptures by militant Orthodox activists. In a letter, Piotrovsky called for legislation to protect cultural institutions from such attacks. Facebook photo.

In an open letter published on the museum’s web site Monday, he called for legislation to protect cultural institutions from such attacks.

Piotrovksy proposed that Russia’s museums must “immediately organize in-house training on protecting the state of their exhibitions,” as reported by The Art Newspaper.

Piotrovksy underscored that the recent attack is “a new provocation against the Russian Orthodox Church. He added that it was “an attempt to present it as primitive and aggressive, and to hinder efforts being carried out right now by museums and the church to reach harmonious relations… Our society is sick.”

The attack was carried out by activists from the group God’s Will, which is led by radical Russian Orthodox activist Dmitry Tsorionov, known widely under the pseudonym Enteo. In the past, he has called Putin a divinely inspired leader of whom Russians are “unworthy,” Radio Free Europe reported.

“We are surprised about the style of the public reaction to these events: the vagueness of the information, the inappropriate smears, and the uncertainty and nervousness of the tone,” wrote Piotrovsky.