Rouman: a Doctor Who Believes in Miracles

HARTFORD, CT – The National Herald’s recent article “Greek-Americans and Miracles over the Decades” (Aug. 8) prompted Dr. James Rouman, a retired anesthesiologist and the author of two novels, to share is own firsthand account of a miracle that occurred almost 30 years ago, yet remains fresh in his mind and left a profound effect on him. 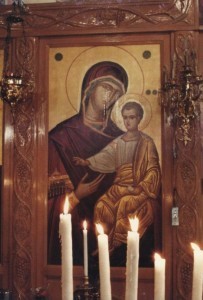 “I was attending a medical meeting at an O’Hare Airport Hotel in March 1987,” Dr. Rouman told TNH, “when I learned of a tearing (weeping) icon at an obscure Albanian Orthodox Church in Chicago, and decided to see for myself what the fuss reported in the newspapers and on television was all about.

“Arriving at the church, I saw a line of people waiting to enter the building in front of which several tour busses were parked,” he continued. “For over four months, more than a quarter million people from as far away as Ceylon, Sri Lanka, England, Rome, and Egypt had made the pilgrimage to see what for many was believed to be a miracle.

“On the afternoon of my visit, a church official remarked that the icon was weeping more than usual, and that the amount of material coming from the eyes of the Virgin Mary was sufficient to permit those present to be anointed if they so desired. Soon it would be my turn to witness the unforgettable. Approaching the icon, I recognized it to be a painting on canvas over wood, standing about five feet tall, three feet wide, and in colors primarily of red and gold. One could see that the icon positioned on the iconostasis was in no way supported from behind or touching anything other than the screen, itself, of which it was a part. As I stood before the icon, I saw a liquid substance falling directly from the pupils of the Virgin Mary’s eyes, over her face and clothing, reaching finally to the bottom of the icon.

“There the exudate was carefully collected, placed in a small silver bowl and taken to several priests, who while uttering words of blessing and prayer, anointed those who came forward. At that moment I knew I was witnessing not just a religious phenomenon, but an awesome and miraculous event unlike anything I could have ever imagined. And although I stood in wonder, I felt transformed by the experience as the tears were placed on my forehead.”

A graduate of Northwestern University School of Medicine in Chicago, Rouman interned at the Texas Medical Center in Houston and trained as an anesthesiologist at Hartford Hospital and McGill University. His entire career has been as a staff member of Hartford Hospital, the largest tertiary care center between Boston and New York City. Rouman was also a faculty member of the University of Connecticut Health Center.

How does Rouman reconcile all the science and medicine that he learned, practiced, and taught over the years, with a phenomenon that cannot be explained by those disciplines?

“A great physician or scientist, if honest with himself,” Rouman explains, “is humbled by what little he knows as a function of what there is to know – not just of the human body, but of nature itself, of the universe in which he exists. The infinite order of it all, the intricacy of design of all existing matter, whether alive or inert, boggles the mind of anyone giving expression to such thoughts.

“Through it all, the issue of origin, of ontology, is brought to bear. There had to be a beginning. There had to be a superhuman architect to have fashioned the universe in all of its unfathomable complexity. To me and to the physicians and scientists I’ve known and respected during my career, that answer can only be God, however expressed by any given person. Under such a premise, it is not hard to reconcile the natural with the supernatural. Things can and do occur for which we have no immediate or rational explanation And just what does, for example, constitute a rational explanation? After all, we learn in science that too often today’s wisdom is merely tomorrow’s folly.

As physicians and scientists,” Rouman continues, “we are taught to observe carefully and to record accurately what we see, which in turn determines, to a large extent, what we do and how we react.”

All that aside, how can the rest of us, who weren’t there be convinced that what Dr. Rouman experienced was really a weeping icon, and not some sort of hoax?

“What I personally observed in that little church in Chicago was not an illusion. It was not a matter of whether there were a few tears that had wetted an icon. There was material enough streaming from the Virgin’s eyes to have been collected and used to anoint hundreds of persons over several months’ time. As for skeptics, there were obviously some. To them, all I can say is that those who need tidy and finite answers to metaphysical questions or inexplicable religious phenomena will not be satisfied until such time they have had a religious experience of their own. Only then will the need for explanations be put aside.”

He continued: one might ask why God chooses to make His presence felt in places far and wide, often mysteriously and beyond comprehension. Why is it that in a small Albanian church the Virgin Mary wept tears? For some people these and similar questions call for plausible answers. To me they are irrelevant. Having seen the tears of the Theotokos, I no longer doubt that God reveals himself at times and in ways that are difficult to understand. I don’t need an explanation for what I witnessed. I know what I saw.”

It would have been considered a “sacrilege if the tears were given up for analysis,” Rouman explains. But why? If those who submitted them for analysis really believed, then what could be better than a good faith effort to show everyone else the tears were real – through whatever evidence they needed to believe, even if that were chemical analysis?

The sacrilege, as Rouman explained, would not have been in the concept of a chemical analysis, but rather in the act. “The ecclesiastic authorities of Chicago prevented the chemical analysis of the material coming from the Virgin’s eyes for theological reasons, the thinking being that the substance represented part of the Virgin’s body and should therefore be handled with same respect as would be shown the body and blood of Christ in the Eucharist.”

As for what it looked and felt like, Rouman said “the material was not clear fluid likened to tears, but rather a more thick substance akin to myrrh.”

Rouman says the experience further strengthened his faith in God, and make him more open to believing that other similar reported phenomena to be true.

Dr. Rouman was born in Wisconsin to parents from Metamorphosis, a village in the Southern Laconian region of Monemvasia – the family name, “Roumanis,” was shortened at Ellis island by one of his uncles, who had arrived to the United States earlier.

His first novel, Underwater Dreams, is semi-autobiographical in nature and was written as a tribute to that cohort of Greeks, who while finding themselves in remote cities and areas of America, and without the support of a Greek community, church, schools and cultural organizations, managed to maintain their Orthodox faith, language, and traditions, all the while accomplishing great things. “My two siblings and I were home schooled in the Greek language by my mother, who procured material for that purpose from Greece. One of my brothers is also a physician, while the other became a distinguished professor of Greek and Latin,” he says.

His second novel, Uncertain Journey, received high marks from the reviewer Kirkus. The book “is a story in which I attempt to put a face on one of the major and troublesome societal issues of our day, namely, that of the illegal immigrant, through the telling of the plight of an Albanian alien living in the shadows of our society and within a well-established Greek-American community.”

Finally, regarding the miracle he witnessed in 1987, “I urge your readers to go on line and google ‘Weeping Icon, St. Nicholas Albanian Orthodox Church, Chicago,’ where numerous detailed accounts of the phenomenon can be accessed,” Dr. Rouman says.