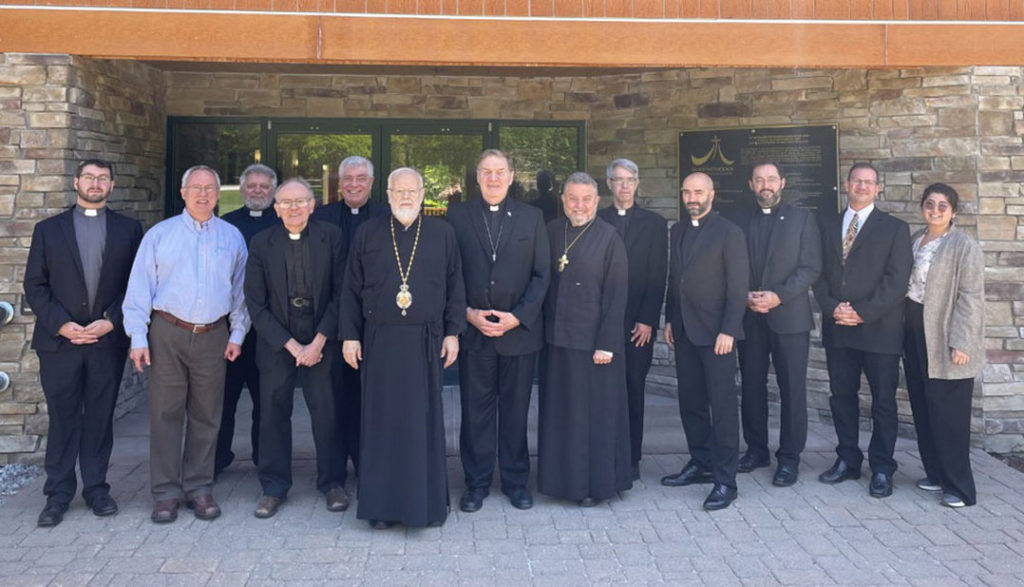 Contoocook, NH — The North American Orthodox-Catholic Theological Consultation met for its one-hundredth meeting at the Saint Methodios Faith and Heritage Center in Contoocook, New Hampshire, on May 17-19, 2022. Some participants also attended online.

The Consultation, co-chaired by Cardinal Joseph W. Tobin, the Catholic Archbishop of Newark, and by Greek Orthodox Metropolitan Methodios of Boston, heard presentations on the mystery of marriage in both Catholic and Orthodox Churches examining from the secular sources the Christian dimension it acquired through time. The sacramentality of marriage signifies the relationship between Christ and His Church. The growing number of ecumenical couples, especially between Orthodox and Catholic, urges to offer a common response expressing the care and spiritual responsibility of the Churches. The Consultation examined various commonalities and differences in the theology of marriage, and approached the question following the canonical tradition with a special emphasis on the sacramental development of the rites.

For Cardinal Joseph W. Tobin: “This meeting was an opportunity during this time after Easter and Pascha to reflect on the question of marriage which is a crucial issue for both Sister Churches. We are particularly happy to have been able to finally meet in person after a hiatus of more than two years due to the pandemic.” Metropolitan Methodios continued: “This Consultation is the oldest ecumenical conversation between Orthodox and Catholics. This one hundredth meeting is a real milestone on the path to our restored unity and communion.”

The members of the Consultation also discussed the war in Ukraine and call for peace and reconciliation in the region.

The North American Orthodox-Catholic Theological Consultation is sponsored jointly by the Assembly of Canonical Orthodox Bishops of the United States of America, the Bishops’ Committee for Ecumenical and Interreligious Affairs of the USCCB, and the Canadian Conference of Catholic Bishops. Since its establishment in 1965, the Consultation has issued some 30 agreed statements on various topics. All these texts are available on the website of the US Conference of Catholic Bishops at:

and on the web site of the Orthodox Assembly of Bishops at:

Information regarding the fall meeting will be shared at a later time.