Patriarch Kirill I has provided spiritual cover for the invasion of Ukraine, reaping vast resources for his church in return. Now, in an extraordinary step, the E.U. is threatening him with sanctions. 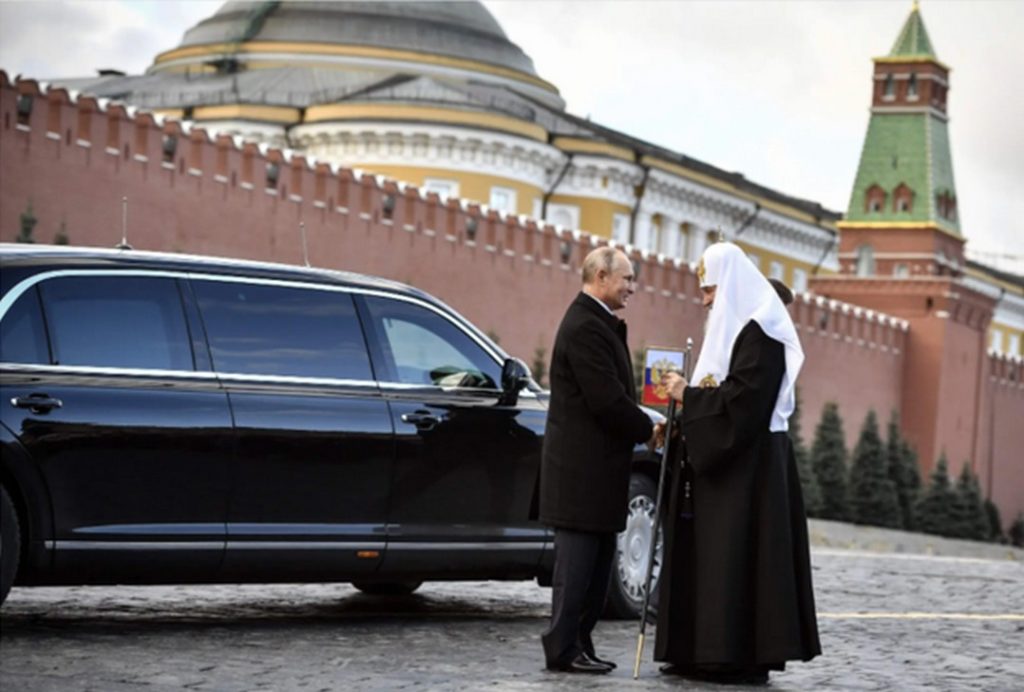 As Russia’s invasion of Ukraine unfolded, Patriarch Kirill I, the leader of the Moscow-based Russian Orthodox Church, had an awkward Zoom meeting with Pope Francis.

The two religious leaders had previously worked together to bridge a 1,000-year-old schism between the Christian churches of the East and West. But the meeting, in March, found them on opposing sides of a chasm. Kirill spent 20 minutes reading prepared remarks, echoing the arguments of President Vladimir V. Putin of Russia that the war in Ukraine was necessary to purge Nazis and oppose NATO expansion.

Francis was evidently flummoxed. “Brother, we are not clerics of the state,” the pontiff told Kirill, he later recounted to the Corriere della Sera newspaper, adding that “the patriarch cannot transform himself into Putin’s altar boy.”

Today, Kirill stands apart not merely from Francis, but from much of the world. The leader of about 100 million faithful, Kirill, 75, has staked the fortunes of his branch of Orthodox Christianity on a close and mutually beneficial alliance with Mr. Putin, offering him spiritual cover while his church — and possibly he himself — receives vast resources in return from the Kremlin, allowing him to extend his influence in the Orthodox world.

To his critics, the arrangement has made Kirill far more than another apparatchik, oligarch or enabler of Mr. Putin, but an essential part of the nationalist ideology at the heart of the Kremlin’s expansionist designs.

Kirill has called Mr. Putin’s long tenure “a miracle of God,” and has characterized the war as a just defense against liberal conspiracies to infiltrate Ukraine with “gay parades.”

“All of our people today must wake up — wake up — understand that a special time has come on which the historical fate of our people may depend,” he said in one April sermon. “We have been raised throughout our history to love our fatherland, and we will be ready to protect it, as only Russians can defend their country,” he said to soldiers in another.

Kirill’s role is so important that European officials have included him on a list of individuals they plan to target in an upcoming — and still in flux — round of sanctions against Russia, according to people who have seen the list.

Such a censure would be an extraordinary measure against a religious leader, its closest antecedent perhaps being the sanctions the United States leveled against Iran’s supreme leader, Ayatollah Ali Khamenei.

For more than a decade, Kirill’s critics have argued that his formative experience of religious repression during the Soviet era had tragically led him into Mr. Putin’s empowering and ultimately inescapable embrace, turning the Russian Orthodox Church under Kirill’s leadership into a corrupted spiritual branch of an authoritarian state.

Sanctions, while likely to be seen within Russia and its church as merely further evidence of hostility from the Godless West, have the potential to place a finger on the scale of the shifting balance of power within the often bitterly divided Orthodox Church.

“This is new,” said Enzo Bianchi, a Catholic lay monk who first met Kirill in the late 1970s at conferences he organized to promote reconciliation with the Orthodox Church.

Mr. Bianchi worried that imposing sanctions on a religious leader could set a dangerous precedent for “political interference in the church.” Still, he considered Kirill’s alliance with Mr. Putin disastrous.

All of which has raised the question of why Kirill has so thoroughly aligned himself with Russia’s dictator. 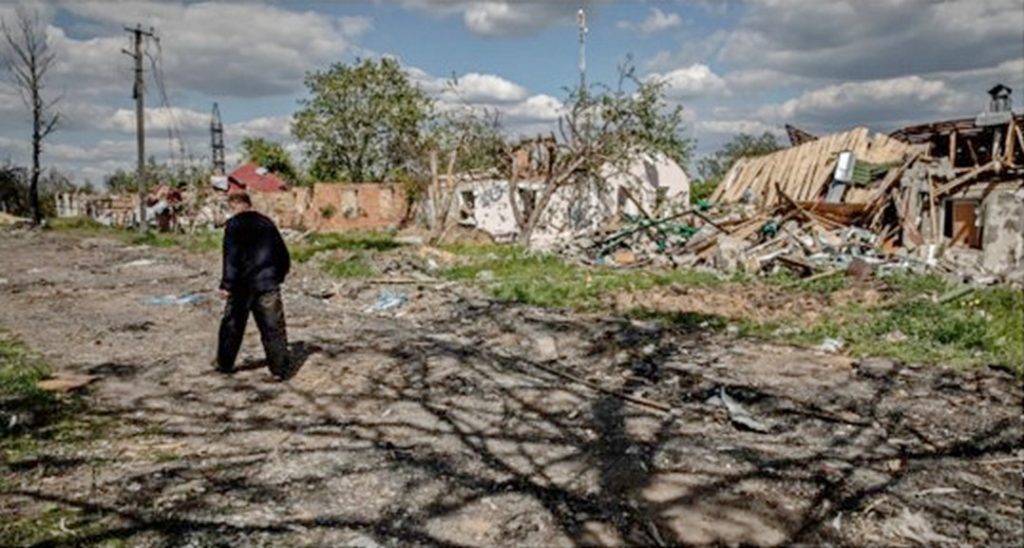 The war’s destruction in a village east of Kharkiv, Ukraine, on Thursday. Protection of the Orthodox faithful in Ukraine who remain loyal to Moscow has been used as part of the pretext for the Russian invasion.Credit…Finbarr O’Reilly for The New York Times

Part of the answer, close observers and those who have known Kirill say, has to do with Mr. Putin’s success in bringing the patriarch to heel, as he has other important players in the Russian power structure. But it also stems from Kirill’s own ambitions.

Kirill has in recent years aspired to expand his church’s influence, pursuing an ideology consistent with Moscow being a “Third Rome,” a reference to a 15th-century idea of Manifest Destiny for the Orthodox Church, in which Mr. Putin’s Russia would become the spiritual center of the true church after Rome and Constantinople.

It is a grand project that dovetails neatly with — and inspired — Mr. Putin’s mystically tinged imperialism of a “Russkiy Mir,” or a greater Russian world.

“He managed to sell the concept of traditional values, the concept of Russkiy Mir, to Putin, who was looking for conservative ideology,” said Sergei Chapnin, a senior fellow in Orthodox Christian studies at Fordham University who worked with Kirill in the Moscow Patriarchate.

Born Vladimir Mikhailovich Gundyaev at the end of World War II, Kirill grew up, like Mr. Putin, in a small St. Petersburg apartment during the Soviet era. But while Mr. Putin has painted himself as a brawling urchin, Kirill came from a line of churchmen, including a grandfather who suffered in the gulags for his faith.

“When he returned, he told me: ‘Don’t be afraid of anything but God,’” Kirill once said on Russian state television.

Like practically all elite Russian clerics of the era, Kirill is believed to have collaborated with the K.G.B., where Mr. Putin learned his early trade.

Kirill quickly became someone to watch in Russian Orthodox circles, representing the church in 1971 at the World Council of Churches in Geneva, which allowed him to reach out to Western clerics from other Christian denominations.

“He was always open to dialogue,” said Mr. Bianchi, who remembered Kirill as a thin monk attending his conferences.

Traditionalists were initially wary of Kirill’s reformist style — he held megachurch-like events in stadiums and amplified his message, and popularity, on a weekly television show, starting in 1994.

But there were also early signs of a deep conservatism. Kirill was at times appalled by Protestant efforts to admit women to the priesthood and by what he depicted as the West’s use of human rights to “dictatorially” force gay rights and other anti-Christian values on traditional societies.

In 2000, the year Mr. Putin took power in Moscow, Kirill published a mostly overlooked article calling the promotion of traditional Christian values in the face of liberalism “a matter of preservation of our national civilization.”

In December 2008, after his predecessor Aleksy II died, Kirill spent two months touring — critics say campaigning — in the Russian monasteries that kept the flame of conservative doctrine. It worked, and in 2009, he inherited a church in the middle of a post-Soviet reawakening.

Kirill gave a major speech calling for a “Symphonia” approach to church and state divisions, with the Kremlin looking after earthly concerns and the church interested in the divine.

At the end of 2011, he lent his voice to criticism against fraudulent parliamentary elections by defending the “lawful negative reaction” to corruption and said that it would be “a very bad sign” if the Kremlin did not pay attention.

Soon afterward, reports of luxurious apartments owned by Kirill and his family surfaced in the Russian media. Other unconfirmed rumors of billions of dollars in secret bank accounts, Swiss chalets and yachts began to swirl.

A news website dug up a photograph from 2009 in which Kirill wore a Breguet Réveil du Tsar model watch, worth about $30,000, a marker of membership to the Russian elite.

After his church sought to airbrush the timepiece out of existence, and Kirill denied ever wearing it, its remaining reflection on a polished table prompted an embarrassing apology from the church.

The Rev. Cyril Hovorun, an Orthodox priest who was a personal assistant to Kirill for a decade, said the tarnishing of the patriarch’s reputation was interpreted by Kirill as a message from the Kremlin not to cross the state. 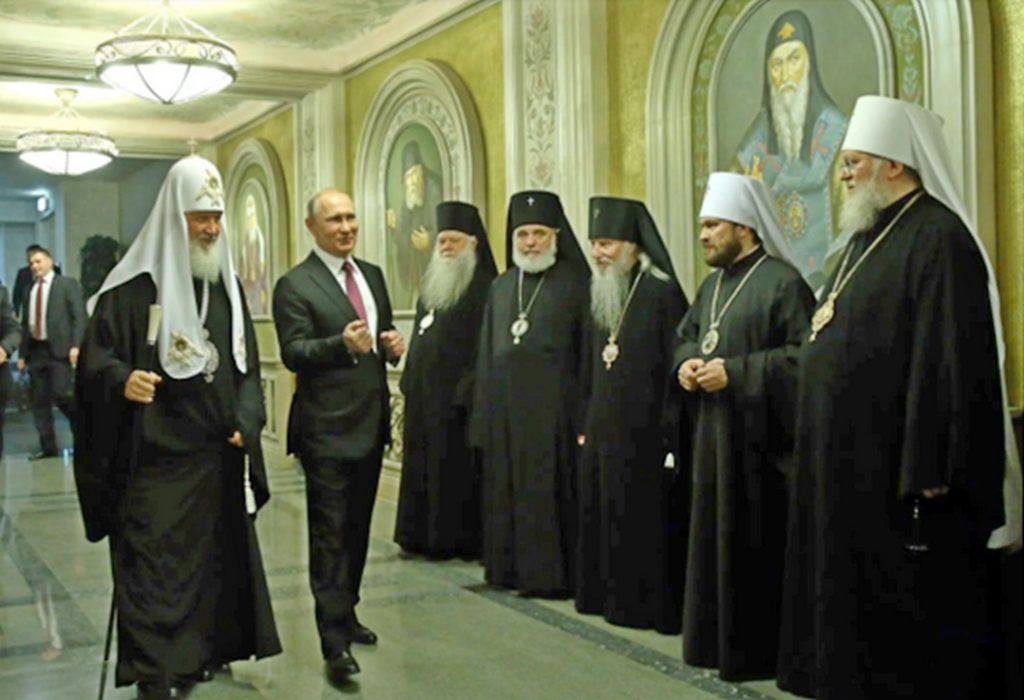 “He realized that this is a chance for the church to step in and to provide the Kremlin with ideas,” said Father Hovorun, who resigned in protest at that time. “The Kremlin suddenly adopted the language of Kirill, of the church, and began speaking about traditional values” and how “Russian society needs to rise again to grandeur.”

Father Hovorun, now a professor of ecclesiology, international relations and ecumenism at University College Stockholm, said Kirill took Mr. Putin’s talk of being a believer with a grain of salt.

“For him, the collaboration with the Kremlin is a way to protect some kind of freedom of the church,” he said. “Ironically, however, it seems that under his tenure as the patriarch, the church ended up in a situation of captivity.”

Steadily, the line between church and state blurred.

In 2012, when members of the feminist punk band Pussy Riot staged a “Punk Prayer” in Moscow’s Christ the Saviour Cathedral to protest the entanglement of Mr. Putin and Kirill, Kirill seemed to take the lead in pushing for the group’s jailing. He also explicitly supported Mr. Putin’s presidential bid.

His church reaped tens of millions of dollars to reconstruct churches and state financing for religious schools. The St. Basil the Great Foundation of Konstantin Malofeev, a Russian Orthodox oligarch close to Mr. Putin, paid for the renovation of the Moscow headquarters of the church’s department of external church relations, which Kirill used to run.

Kirill raised taxes significantly, and with no transparency, on his own churches, while his own personal assets remained classified. Mr. Chapnin, who had been personally appointed by Kirill to run the church’s official journal, began criticizing him and was fired in 2015.

Like Mr. Putin’s Kremlin, Kirill’s church flexed its muscles abroad, lavishing funds on the Orthodox Patriarchates of Jerusalem and Antioch, based in Syria. Those investments have paid off.

But for Kirill, Moscow’s status in the Orthodox world is perhaps of primary importance.

The Great Schism of 1054 split Christianity between the Western church, loyal to the pope in Rome, and the Eastern church in Constantinople. In the ensuing centuries, the Constantinople patriarch, with his seat in present-day Istanbul, maintained a first among equals status among Eastern Orthodox churches, but others became influential, including Moscow.

Moscow’s invasion of eastern Ukraine in 2014 led the already unhappy Ukrainian Orthodox Church to break from centuries of jurisdiction under Moscow, costing it about a third of its parishes. Recognition of the Ukrainian church by the Ecumenical Patriarchate of Constantinople fueled tensions between Moscow and Constantinople.

The internal church war has also spilled into the military one, with Moscow using the protection of the Orthodox faithful in Ukraine who remain loyal to Kirill as part of the pretext for invasion.

Mr. Putin’s war and Kirill’s support for it now appear to have diminished their shared grand project. Hundreds of priests in Ukraine have accused Kirill of “heresy.” The threat of European Union sanctions looms. Reconciliation with the Western church is off the table.

Yet Kirill has not wavered, calling for public support of the war so that Russia can “repel its enemies, both external and internal.” And he smiled broadly with other loyalists in Mr. Putin’s inner circle on May 9 during the Victory Day parade in Moscow.

Some say he has no choice if he wants to survive.

Jason Horowitz is the Rome bureau chief, covering Italy, the Vatican, Greece and other parts of Southern Europe. He previously covered the 2016 presidential campaign, the Obama administration and Congress, with an emphasis on political profiles and features. @jasondhorowitz