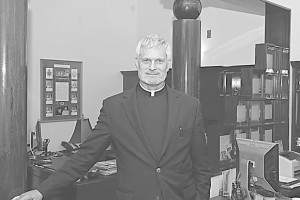 Rev. Mark Arey is the spokesman for the Greek Orthodox Archdiocese of America regarding St. Nicholas at Ground Zero.

NEW YORK – The new St. Nicholas Church at Ground Zero, which is expected to open its doors in early 2016, will be in a lease status, Archdiocesan spokesman Fr. Mark Arey told TNH. He said “the Church has a lease for the property with the option to buy at a nominal price at any time, on the principal that the property of Saint Nicholas belongs to the Church.”

He explained that “the church will house 150 congregants; it will be 65 feet tall from the base. On the first level will be the church, on the second the nondenominational bereavement center and on the third the community center.”

Arey also said that “we clearly have a design and a selection drawing by Santiago Calatrava. This design was approved by a committee comprised of the parish, its presiding priest, parish council representatives, members of the Holy Synod, and consultants from outside who are Greek Orthodox specialists in architecture. It was a long process, a select process. I believe there are 13 architects, some of whom are Greek Orthodox members of the Greek-American Community who have designed other churches in the Archdiocese.”

As to why Calatrava was chosen instead of others, Arey said “on the basis of almost a consensus among the committee and people that his design achieved the very specific goals of the archbishop, which has been the goal from the beginning, that it must be of the tradition of the Greek Orthodox Church…We need to really make sure that it doesn’t violate the architectural integrity,” he added.

Why not officially announce that Calatrava had been chosen? “We have been working with a complex set of circumstances toward the regulatory authority, governmental institutions, because it is a very complicated site,” Arey said. “We were waiting to pass certain regulatory considerations which didn’t pass in time before Mr. Calatrava posted some designs on his website and the media picked up.”

Arey verified that “the Archdiocese contracted Calatrava” but he didn’t know for how much. He said “I don’t know how much of the top of my head and there are other contracts already issued in construction management.” TNH pressed Arey about why the Greek-American community was not better informed, but Arey said that was not up to him.

According to Arey, the all-inclusive budget is $20 million, except for the iconography. He said he did not know how much had been collected to this point, but confirmed that the Archdiocese would be supervising the collection of funds.

Rather than be distressed about an article in last week’s New York Times, describing the Church’s design as influenced by Muslim architecture from Turkey, Arey said “this is a teachable moment for the Church. Most people didn’t have any idea that the Greeks invented the dome, particularly the Mycenaeans. They don’t know that the dome is a Christian form of architecture and that was later adopted by Islam 1000 years after Agia Sophia was build. It is an interesting piece of history and there is nothing for us to back down from because it is our tradition and we should be proud of our tradition. We need to educate the public and I think Saint Nicholas Church will be a wonderful opportunity not only to make some broad points about the place of religion in the American life and the good the religion can do, but also to show what Orthodoxy is.”

Arey said that the Nondenominational Center traces back to then-Governor George Pataki when there had been talk about rebuilding the Church elsewhere. Pataki “asked if the new Church can be conceived in such a way that it can have a broader mission, and it was embraced by Archbishop Demetrios and by the Church. So, inside the church will be a publicly accessible space that will be a meditation space for anyone who wants to have a moment alone at Ground Zero. It is actually going to be above the narthex. On the first level you have the Church, on the second level you have the Bereavement Center, and on the third level the Community Hall.

“If a group of Muslims or Buddhists or any other group comes to the Archdiocese and says ‘this is a nondenominational center and we like to worship in there,’ our answer is that the entire site is controlled by the Port Authority, said Arey. “We have to adhere to the security and to the process of the Port Authority. The Church will not become a place of confrontation.”