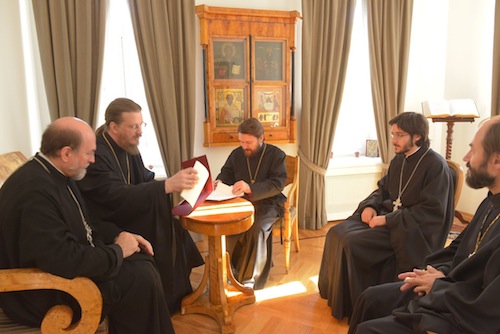 YONKERS, NY [SVOTS Communications]- The Dean and Chancellor/CEO of Saint Vladimir’s Seminary here—Archpriest Dr. John Behr and Archpriest Dr. Chad Hatfield—signed an agreement with Saints Cyril and Methodius Theological Institute of Post-Graduate Studies in Moscow, laying the foundation for the establishment of the “Saint Philaret of Moscow Russian House of Studies” at Saint Vladimir’s.

The cooperative statement was signed at the culmination of the Dean and Chancellor’s visit to Russia October 7–14, 2013.  The Russian House of Studies, a part of the seminary’s International Houses of Studies program, will welcome the exchange of teachers and students from the Moscow institute.

“Our plans for partnering with overseas schools continue apace,” said Father John Behr. “Through these collaborative efforts we will be able to serve the Church in the United States more effectively, enriching the formation of our students and laying the groundwork for ongoing dialogue with Orthodox schools of theology overseas.”

Members of the Saint Vladimir’s delegation fully participated in Church life during their week-long trip.  On Tuesday, October 8, they participated in the Divine Liturgy at which Metropolitan Hilarion presided at the Holy Trinity-Saint Sergius Lavra, Sergiev Posad; celebrated an Akathistos Hymn in the courtyard of the Lavra at which His Holiness, Patriarch Kyrill of Moscow presided; were hosted at a private audience with the Patriarch; and presented a complete set of Popular Patristics Series volumes from SVS Press to the Moscow Theological Academy Library.

On Wednesday, October 9, they participated in the opening Ceremonial Day at the St. Petersburg Theological Academy with the presentation of a complete set of Popular Patristics Series volumes; visited the Publishing House of the Sretensky Monastery to discuss production of Orthodox Christian materials in Russia and North America; and met with the Orthodox Church in America representative to the Moscow Patriarchate, Archimandrite Alexander [Pihach], regarding the possibility of opening an English-language bookstore at the OCA’s Representation Church of the Great Martyr Catherine.

On Thursday and Friday, October 10-11, they participated in the “Saint Isaac the Syrian and His Spiritual Heritage” conference, sponsored by Saints Cyril and Methodius Institute and the Philosophy Department of Moscow State University, at which Father John Behr delivered a paper titled “Saint Isaac of Syria on the Cross.”  Other speakers included Schemamonk Gabriel [Bunge], Sebastian Brock, and Archimandrite Vasilios of the Iviron Monastery.

On Saturday, October 12, Father John Behr addressed students at Saints Cyril and Methodius Institute regarding the history and contemporary life of Saint Vladimir’s Seminary, and his own current theological inquiry, Becoming Human.  A complete set of Popular Patristics Series volumes was presented to the Institute.  They also met with the faculty of Saint Tikhon’s Orthodox University, Moscow, where they also presented copies of the series before attending Vigil at central Moscow’s Church of the Mother of God “Joy of All Who Sorrow,” at which Metropolitan Hilarion presided.

On Sunday, October 13, they concelebrated the Divine Liturgy, at which Metropolitan Hilarion presided, at the same church before singing the agreement between Saint Vladimir’s Seminary and Saints Cyril and Methodius Institute.

“It was a great joy and blessing to serve in Saint Petersburg and Moscow and to see the work of the Holy Spirit in the Church so evident in both of these cities,” Father Chad reflected at the end of the trip.  “We look forward to the fruits of our partnership with Russian Orthodox theologians and students.”

A gallery of trip photos may be viewed here.