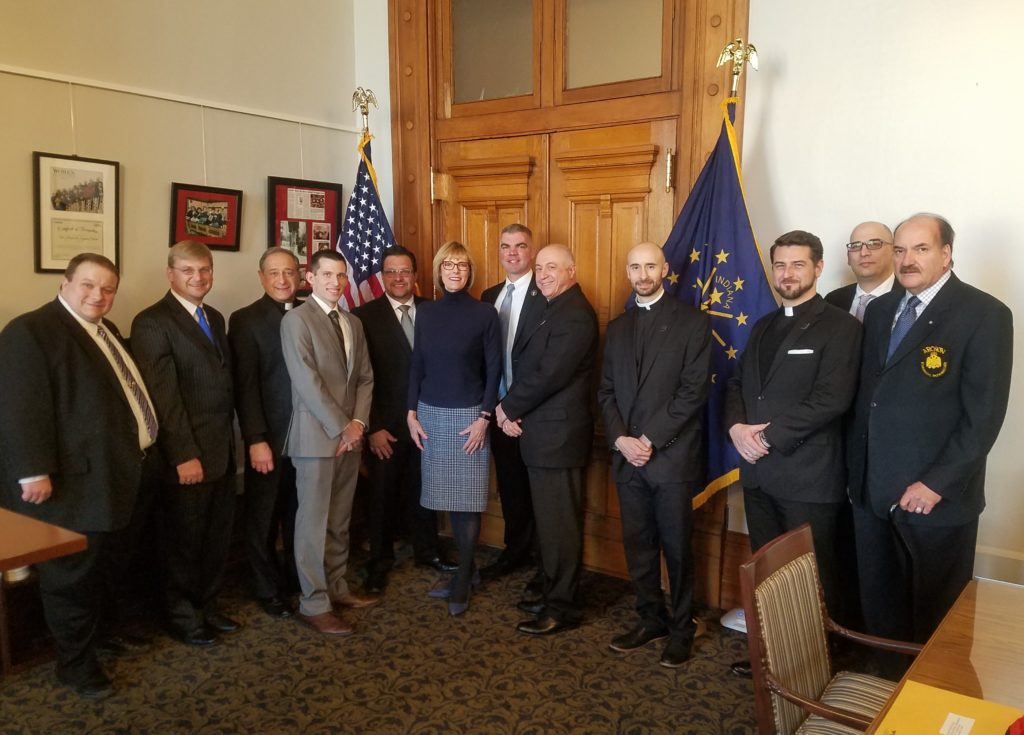 CHICAGO, IL: The Greek Orthodox Metropolis of Chicago and the Metropolis of Detroit, currently both under the leadership of Metropolitan Nicholas, together with Order of Saint Andrew (Archon) Regional Commanders Gus M. Pablecas, John G. Manos, and Lazaros Kircos, are proud to announce that today representatives of both Metropolis’ had a meeting with Lt Governor Suzanne Crouch to receive word that Indiana Governor Eric Holcomb endorses the action taken by the Indiana Senate with resolution SR2 and the House of Representatives resolution HR28, both of which are the Order of Saint Andrew the Apostle’s Religious Freedom Resolution for the Ecumenical Patriarchate of Constantinople. Indiana is now the 45th State to fully pass Religious Freedom resolutions in support of the Ecumenical Patriarchate of Constantinople.

This meeting concludes the highly successful joint effort to gain passage in Indiana of the Archon Resolution which was announced in the fall of 2016. By Spring of 2017, the Indiana Senate responded with passage of SR2 following several media presentations at Greek Orthodox parishes in Northern Indiana. Thanks to the support of Indiana Representative Robert Morris and hard work of Fort Wayne Archon Chris Rongos, the Indiana House of Representatives followed with passage of HR28 on February 28, 2018. The full joint effort to gain passage of the Archon Resolution in Indiana was overseen by the Metropolis of Chicago Department of Media Relations.

The Ecumenical Patriarchate of Constantinople is the spiritual center of over 330 million Orthodox Christians worldwide, making Orthodoxy the second largest tradition within Christianity. Based in Istanbul (formerly, Constantinople), Turkey, since the founding of the church by the Apostle Andrew, elder brother of Apostle Peter and first of the disciples of Christ, today the Ecumenical Patriarchate faces dangers that, if left unchecked, could bring an end to this historic religious institution. The five key issues the Resolution calls attention to are:

2) Non-recognition of Ecumenical Patriarch Bartholomew as the worldwide spiritual leader of the Orthodox and treating him as simply a local priest.

3) Re-opening of the Theological School of Halki, closed by the Turkish government since 1971 and where many past Patriarchs have been trained.

5) Confiscation of Property – without a legal identity, the Turkish government claims property owned by the Patriarchate for centuries has been abandoned, and then confiscates the property.

The Metropolis of Chicago oversees all Greek Orthodox Parishes within Illinois, Iowa, Wisconsin and Minnesota as well as eastern Missouri and northwestern Indiana. The Metropolis of Detroit is under the leadership of Metropolitan Nicholas and oversees all Greek Orthodox Parishes in Michigan, Arkansas and Kentucky, as well as eastern and southern Indiana, western Ohio, western Tennessee and upstate New York.