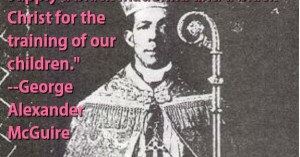 I first learned of Father Raphael Morgan in quite a roundabout manner. His fascinating personal journey and the legacy he has left to Eastern Orthodoxy across the planet is singular, to say the least. This is no simple tale. So, I will just begin with my discovery of this totally unique individual and then trace it all back to what has been reported on Morgan’s life and works.

It was while in graduate school that I kept hearing about the book, East African Rebels: A Study of Some Independent Churches, by Frederick Burkewood Welbourn (London: SCM Press, 1961) from my Africanist colleagues. Given my interest in all things Greek, I was told repeatedly about the “rebels” in question. These individuals were the leaders and members of three independent churches among the Buganda people of Uganda and a number of the Kikuyu in Kenya. Having broken from the Anglican Church, Reuben Spartas Mukasa (1899-1982), a Muganda and a number of his friends and followers introduced the African Orthodox Church (AOC) into Buganda in 1932.

Founded in the United States in 1921, the African Orthodox Church was and remains a primarily African-American denomination. Today, it is said to have approximately 15 parishes and 5,000 members, down significantly from its peak membership. The AOC was founded in the belief that black Episcopalians should have a denomination of their own. On September 28, 1921, in Chicago, IL Episcopal rector George Alexander McGuire (1866-1934) was consecrated a bishop of the AOC. At the time of McGuire’s death on November 10, 1934, the AOC claimed some 30,000 members served by about fifty clergy in thirty parishes in the United States, Africa, Cuba, Antigua, and Venezuela.

Published accounts report that Mukasa had been in correspondence with McGuire as early as 1919. This correspondence dealt with the questions on Orthodoxy with McGuire sending literature on the AOC. In due course Mukasa and his friends became convinced that Eastern Orthodoxy was the religious tradition they had been seeking. McGuire directed them to Bishop Daniel William Alexander who lived in South Africa. Musaka arranged the visit of Bishop Alexander to Uganda which proved to be the occasion when he and three others were ordained as Orthodox priests.

But as later events were to reveal Bishop Alexander was a Uniate and not a bishop of the Orthodox Church. Compounding this discovery was the fact that McGuire (and so the AOC) was not in communion with the Eastern Orthodox Church. Mukasa broke with the AOC and went to Alexandria where (in time) he was ordained by Patriarch Christophorus II the Greek Orthodox Patriarch of Alexandria. One of the greatest chapters in the history of the contemporary Eastern Orthodox faith is the ongoing spiritual interaction between the faithful in Cyprus and the United States with these east African spiritual rebels since the 1930s.

By this time you must be asking yourself, “where does Father Raphael Morgan fit into this larger picture of modern Orthodoxy?” While the events that I am about to describe occurred in anything but a straight line Morgan holds the distinction of being the first African-American Orthodox priest in Western Hemisphere. Stated so plainly this man’s life and actions could be reckoned as nothing more than a side-note in the broader history of modern Orthodoxy—but it was not so understood as such at the time.

On August 2, 1907, the Holy Synod in Constantinople approved that Raphael Morgan be baptized the following Sunday in the Church of the Life-giving Source at the Patriarchal Monastery at Balıklı. The Metropolitan Joachim (Phoropoulos) of Pelagonia (1859 – 1909) officiated at the sacrament, and Morgan’s sponsor was Bishop Leontios (Liverios) of Theodoroupolis, Abbot of the Monastery at Balıklı.

On August 4, 1907, Robert Morgan was baptized Raphael before 3000 people and subsequently ordained a deacon on August 12, 1907 and then, finally ordained a priest on the feast of the Dormition of the Theotokos, August 15, 1907. The Holy Synod sent Father Morgan back to the United States with vestments, a cross, and 20 pounds sterling for his traveling expenses. The minutes of the Holy Synod from October 2, 1907, state that Father Morgan was to be under the jurisdiction of Rev. Demetrios Petrides of the Evangelismos Greek Orthodox Church in Philadelphia.

As we shall see his personal journey and his documented interaction with others such as McGuire, Marcus Garvey and a host of other notable African-American leaders, intellectuals and clergymen has left a unique legacy in the modern world.

Morgan’s tale is in fact so unique, a quote about the man that sees endless citation notes that: “the Morgan story is so utterly improbable that one tends to dismiss it as a hoax.” And for a man so unknown to the majority of the Orthodox faithful it is again surprising how much has been written about this “forgotten” figure.

Let us begin with this man’s beginning. Robert Josias Morgan was born in Chapelton, Clarendon Parish, Jamaica sometime between 1864 and 1871 to Robert Josias and Mary Ann (née Johnson) Morgan. Since Morgan was born six months after his father’s death he was named in his father’s honor. Morgan was raised in the Anglican tradition and received elementary schooling locally. Little is reported of this period in Morgan’s life.

It is only with the onset of his teenage years that Morgan begins what proves to be a lifetime of travel. First the young Morgan travelled to Colón, Panama, then to British Honduras, back to Jamaica, and then to the United States. At the moment no public records why or even how young Morgan could afford such travels. There is even some uncertainty as to the sequence of these movements and the locations he visited. It has been presumed Morgan traveled in this haphazard way to gain an education. Most sources report that at this point Morgan went to Germany where he worked as a Christian missionary.

Next the wandering Morgan went to England, and while the exact sequence of these events is not documented, he joined the Church of England becoming not long after a minister in the African Methodist Episcopal Church (AME). Some sources allege that Morgan was sent by the AME to Sierra Leone to the Church Missionary Society Grammar School at Freetown.

Morgan was always poor how he even managed to survive is an ongoing mystery. Yet Morgan supported himself in Freetown as second master of a public school. There was a drive and intent in Morgan’s action that none of the articles or accounts I have read so far can explain. Wherever Morgan traveled it was always remarked that he was an avid one could almost say obsessed student. It is often noted that Morgan while in Liberia “studied Greek, Latin, and other higher-level subjects.”

It is known that while in Liberia Morgan took a course in the Church Missionary Society College at Fourah Bay in Freetown. The presumption is that at this point Morgan met one of the many remarkable religious figures that were to enter his life. Based upon his success in his course work Morgan was appointed a missionary teacher and lay-reader by none other than the Episcopal Bishop of Liberia, the Right Reverend Samuel David Ferguson (1842-1916). Ferguson was the first African-American elected a bishop of the Episcopal Church in the United States of America. Of this period Morgan would later recall that he had served five years in West Africa, of which he spent three years in missionary work.

After this Morgan again visited England for private study, and then traveled to the United States to work amongst the African-American community continuing as a lay-reader. He was accepted as a Postulant and as candidate for the Episcopal deaconate. It is reported that during the canonical period of waiting period before ordination, Morgan returned to England to study at Saint Aidan’s Theological College in Birkenhead, and finally prosecuted his studies at King’s College of the University of London. Nonetheless, these colleges do not contain records of his attendance.

Morgan returned to the United States, and on June 20, 1895 was ordained as deacon by the Rt. Rev. Leighton Coleman (1837-1907), Bishop of the Episcopal Diocese of Delaware, and a well-known opponent of racism. Morgan was soon appointed honorary curator in St Matthews’ Church in Wilmington, serving there from 1896 to 1897. Apparently, money problems still plagued Morgan since he also found it necessary to procure a job as a teacher for various public schools.

Morgan’s personal history, after his return to the United States from Liberia, will become more significant as we review his contacts with Father George Alexander McGuire, Marcus Garvey and other notable African-Americans. For the moment it is enough to report that by the turn of the 20th century, Morgan seriously began to question his faith, and began intensive systematic study of Anglicanism, Catholicism, and Eastern Orthodoxy to discover what he felt was the true religion. As we shall see Morgan’s conclusions still resound through the Eastern Orthodox faithful across the planet.