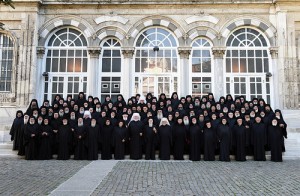 From August 29-September 2, 2015, at the invitation of His All-Holiness Ecumenical Patriarch Bartholomew, a Synaxis of Hierarchs of the Ecumenical Throne gathered from all over the world at the Church of the Holy Trinity in Taksim Square. His All-Holiness delivered the Keynote Address to over 140 Hierarchs of the Throne, speaking to developments and challenges of the Ecumenical Patriarchate and the Orthodox Church in general during recent years.

Introductions were presented by senior Metropolitans on ecclesiastical, pastoral and theological initiatives and ministries, including the forthcoming Holy and Great Council, the regional Assemblies of Bishops, the World Council and European Council of Churches, the Theological Dialogues with the Roman Catholic Church, the Pre-Chalcedonian Churches, the World Lutheran Federation, the Anglican Communion, the World Communion on Reformed Churches and the Old Catholic Church.

Further presentations were delivered on contemporary vital issues, such as the Orthodox response to bioethical issues, the root and impact of climate change, as well as the phenomenon of immigration and the pastoral ministry of the Church toward the humanitarian refugee crisis.

On September 1, 2015, the beginning of the ecclesiastical year, His All-Holiness presided over the Divine Liturgy, together with the Hierarchs in attendance. There followed the traditional Act of the Signing of the New Indiction.

Communique from the Ecumenical Patriarchate

From August 29th to September 3rd, 2015, at the invitation and under the presidency of His All-Holiness Ecumenical Patriarch Bartholomew, the venerable Hierarchy of the Ecumenical Throne, together with the Hierarchs under its canonical charge, including the Autonomous Churches of Finland and Estonia as well as the Ukrainians and Carpatho-Russians, under its protection, convened in Synaxis at the Church of the Holy Trinity in Istanbul.

During the Synaxis, followed by a detailed introduction by His All-Holiness, there was discussion on topics such as the development of the Holy and Great Council, communications with other Christian Churches, confession, bioethics, preservation of the environment, and much more.

There was a special focus on the dialogue about the problem of migration in pastoral, humanitarian and other dimensions.

Moreover, based on recent global events, this Synaxis of Hierarchs of the Ecumenical Patriarchate directed an appeal for all people throughout the world to respect the sacredness of the human person as a priest of creation with a mandate from God for its safekeeping. The Synaxis also condemned evert for violence, fanaticism and deserialization that renders humanity and object of exploitation.

At this assembly, the Hierarchy of the Ecumenical Throne determined with great concern and profound sadness that, in today’s circumstances, Christ is once again being crucified. An indigenous Christian population in the Middle East and Africa- with rich cultural heritage and contribution- are forced through the oppression and brutality of religious fundamentalists to abandon their ancestral homes. As Christ was once persecuted by Herod, refugees are obligated to seek hospitable security in the West and leave behind in ruins the monuments of their civilization, which they have revered for centuries.

In light of this tragic reality, in recalling its own ordeals, the Great Church of Christ stands in solidarity with these Christian communities and supports- before the relevant international authorities- the right of all people to worship their God freely, while at the same time declaring that religion should unite races and civilizations, serving as the foundation of culture and humanness.

Furthermore, the Hierarchs of the Ecumenical Patriarchate directed their attention and prayer toward the thousands of their troubled brothers and sisters in difficult circumstances in Ukraine, expressing their wish that division may desist while peace and unity may prevail for the pious Ukrainian people, who received its faith and baptism from the Mother Church of Constantinople.

The Hierarchs gathered at the Synaxis communicated their blessing to the faithful of the blessed eparchies of the first throne Church throughout the world as well as to “every Orthodox Christian soul,” together with their expression of respect toward Their Beatitudes, the Primates of the Orthodox Churches, with the hope that the Holy and Great Council of our Orthodox Church may be realized next year.