[ditty_news_ticker id="27897"] Synodality – A Forgotten and Misapprehended Vision: Refections on the Holy and Great Council of 2016 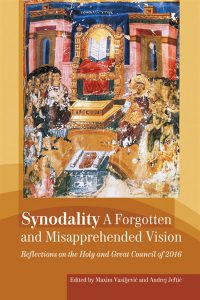 Gathering Orthodox hierarchs from around the world, the Holy and Great Council of the Orthodox Church wrapped-up on the Greek island of Crete on the twenty sixth of June, 2016. In the works for over a century, the event was historic to say the least. But what did it accomplish? The authors of this book share their understanding on the meeting and the next steps to bringing about stronger unity within Orthodoxy worldwide.The appropriate perception of conciliarity is of critical signi cance, for in the course of history there have been many misinterpretations of this institution with grave implications for the unity of the Church. Eight authors—four bishops (all invited and participated at the Council), two priests, a deacon, and a layman-attempt at tackling these questions. Metropolitans Kallistos (Ware), Chrysostomos (Savvatos), and Am lohije (Radovic), Bishop Maxim (Vasiljevic), Fr. John Behr, Fr. Cyril Hovorun, Deacon Nicholas Denysenko, and Evagelos Sotiropoulos, unmask some recent criticisms of the Holy and Great Council as a deception of the public sphere.

Available as E-book on Kindle!