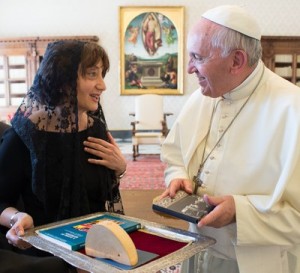 Tamara Grdzelidze with Pope Francis in an audience at the Vatican. © L’Osservatore Romano

Dr Tamara Grdzelidze, an Orthodox theologian and former staff member of the World Council of Churches (WCC), has been received as the nation of Georgia’s new ambassador to the Holy See, presenting her credentials to Pope Francis at the Vatican this September.

From January 2001 through December 2013, Grdzelidze served in Geneva, Switzerland, as a programme executive for the WCC Commission on Faith and Order, which coordinates dialogue among Christian leaders on matters related to theology, doctrine and the nature of the church.

Among the gifts she presented to Pope Francis was a copy of the book A Cloud of Witnesses: Opportunities for Ecumenical Commemoration, a WCC publication which she co-edited in 2009 with Brother Guido Dotti of the Roman Catholic Church.

Grdzelidze is a graduate of Tbilisi University in Georgia, St Vladimir’s Theological Seminary in the United States, and Oxford University in the United Kingdom. She describes her experience of inter-church and inter-cultural dialogue while at the WCC as “a school of international relations” in itself.

Her ambassadorial appointment was made by the Ministry of Foreign Affairs of Georgia.

Grdzelidze explains, “The main task of the embassy is to represent the state in its fullness, especially regarding Georgia’s unique Christian heritage and culture. Georgia’s most ambitious task is to become a full member of the European family to which it belongs culturally and in many ways historically.”

Reflecting on disputes between her country and Russia that culminated in violence several years ago, the ambassador says, “The war in 2008 left Georgia with 20 percent of its territories being occupied as well as hundreds of thousands of people internally displaced and deprived of their homes. Georgia is seeking understanding and support on the part of the state of the Holy See while searching ways to resolve these problems.”

Fifty years after the opening of the Second Vatican Council, Grdzelidze continues to harbour a belief in “real possibilities for more visible unity among Christians,” she says, despite evidence all around that ours has become a “less enthusiastic and hopeful world.”

Pondering today’s challenges to peace among nations and visible unity within the Christian church, Grdzelidze concludes that “what we know for sure is that the gospel message of Jesus Christ, teaching us to love God and our neighbour, is still with us, and we are to interpret the message to the best of our ability.”