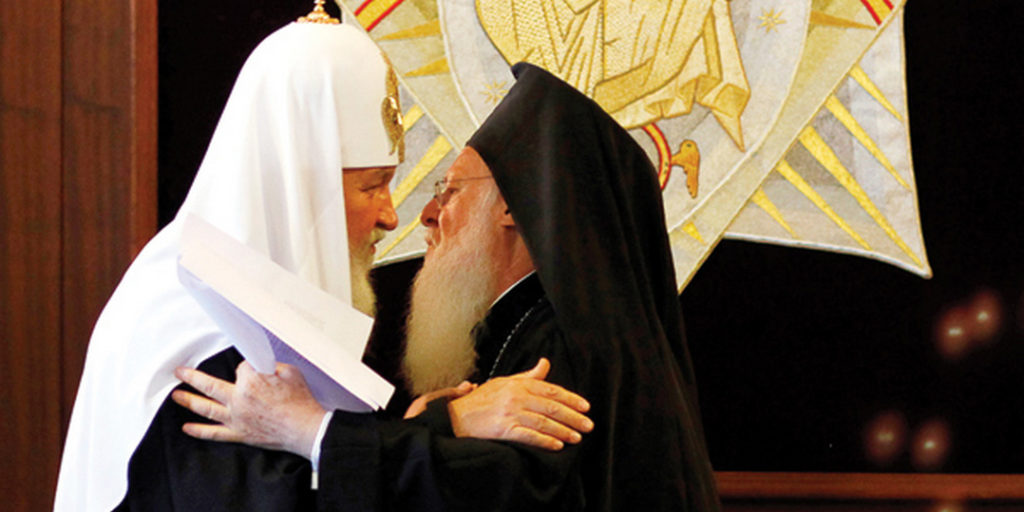 It is tempting to consign the rift between Constantinople and Moscow – this time over autocephaly in Ukraine – to competition within the Orthodox world over power and jurisdiction. The reality is more complex. Beyond the multifaceted religious intrigue lie murky geopolitical ramifications. The matter transcends any exercise of right or even the simple exhibition of might.

The issue of the autocephaly (literally, “self-headed”, or self-governing) of the Church in Ukraine, along with questions of the validity of orders and sacraments, are vital to Orthodox unity, but they pale before the isolationism and nationalism that has plagued Orthodox Christianity in recent centuries. This is the essential context to Moscow’s decision to cut communion with Constantinople. The demoralising effect this is having on the wider Church – coercing bishops and synods into taking sides – only underlines how a handful of Orthodox hierarchs make decisions without concern for or consultation with the lay community. Tragically, it is putting at risk hard-won Orthodox unity in Western Europe and the United States, where Orthodox Churches of all jurisdictions work together on missionary and humanitarian projects.

Of course, the Orthodox Church has never been democratic, even at its most conciliar. But the Early Church understood that the power to discern authenticity – what Orthodox liturgy calls “rightly dividing the word of truth” – does not belong to a bishop or synod alone, but to the Church as a whole. The rights and wrongs of the Ecumenical Patriarchate’s decision – originally issued last April and affirmed this month – to grant autocephaly to the Ukrainian Church (long estranged from Moscow) could be debated by canon lawyers and argued over by church historians. For instance, Moscow may question how Constantinople can restore millions of Ukrainians to communion – but how could Moscow have branded an entire generation of believers “schismatics”? Whenever a mainly Orthodox nation has become an independent state, it has, after a while, gained its own autocephalous Church with its own patriarch; ecclesiastical borders in the Orthodox world frequently follow political borders. But the sweeping reprisals emanating from Moscow suggest something deeper than just a dispute over territory. Yes, Russia stands to lose property; but Constantinople hardly stands to gain wealth or power.

Orthodox unity is as impenetrable a mystery as it is inaccessible in actuality. Orthodox congratulate themselves for oneness in doctrine and sacrament. This has long provided a lucrative selling point to outsiders, while persisting as a romantic notion for insiders. Yet, if unity and canonicity are to be anything more than pieties, Orthodox Christians must admit their failure and hypocrisy. It is disingenuous to brandish “unity” as a defensive banner or an offensive weapon whenever a problem arises. And it is perilous to associate sacramental unity with territorial entitlement. Orthodox unity was revealed to be elusive when a Pan-Orthodox Council was convened in Crete in June 2016 for the first time in a millennium. It soon became clear that the Orthodox Church would be stubbornly reluctant to let go of ancient resentments. Thus when Bartholomew declared that while bishops-in-council could be creative in describing their relationship with other Christian communions, they could not classify them as heretics, resentful deliberations ensued, and reverberate to this day.

Bartholomew’s conviction that the Orthodox Churches would proclaim a more convincing message if they thought and acted together encountered the same opposition as he now faces with his recognition of Ukraine’s autocephaly. The council had provided a forum for airing religious concerns and vetting territorial contentions. By not attending, Russia missed an opportunity to put its case; now it vigorously presses for a pan-Orthodox consensus to resolve the dispute over Ukraine. Then, as now, Moscow’s strategy and action plan were the same: to threaten schism and severance of communion if it did not get its way.

Councils are the natural way for Orthodoxy to govern itself. Yet the Great Council was less about agreements and more about showing a readiness to initiate a more transparent conversation with the modern world, rather than to remain cocooned in its medieval past. The paranoid suggestion that Constantinople is being coerced by the US State Department exposes a hostility towards the West among some Orthodox Churches that is spearheaded by the Moscow patriarchate. Ideological rhetoric further reinforces a sharp distinction between the sacredness of the Orthodox Church and the sinfulness of the West. It is easier to condemn the decadence of the modern world and to dispute territorial boundaries than to address issues of social justice and to seek to transcend parochialism and prejudice.

Bartholomew is boldly cultivating a culture of openness and engagement in the face of unrelenting criticism. As primus inter pares among Orthodox leaders, he has an uncanny ability to remain focused on what matters most – keeping the Orthodox Church in dialogue with the modern world without being in thrall to its values. Orthodox Churches still have much to learn about tolerance – towards other faiths, other cultures, other Churches, other communities. It is precisely the frailty of Bartholomew’s remnant Church, deprived of national protection and unable to make threats in pursuit of territorial claims, that makes him – by history and by destiny – the appropriate centre for unity in the Orthodox world.

Orthodoxy’s foremost reassurance lies in the recognition that the comforting grace of God never abandons the Church. Many ­millions are hoping that church and civic leaders in Russia and Ukraine will embrace the present moment as a unique opportunity for growth and enrichment for God’s people in a region that has far more to gain from complementarity and friendship than from conflict.

Archdeacon John Chryssavgis is theological adviser to the Ecumenical Patriarch on environmental issues. His books include Light Through Darkness: Insights into Orthodox Spirituality.