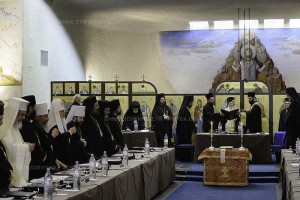 Synaxis at the Orthodox Center of the Ecumenical Patriarchate in Chambesy, Geneva

The Holy and Great Synod of the Orthodox Church will meet in June this year, according to the Athens News Agency-Macedonian Press Agency (ANA-MPA).

Of course, for the Holy and Great Synod of the Orthodox Church to meet in June, during the period of Pentecost (06/19/2016), the Primates in Geneva must definitely choose the themes and regulations.

The decision to convene the Holy and Great Synod of the Orthodox Church in Crete, rather than at the headquarters (Constantinople) of the Ecumenical Patriarchate, was dictated by the “exceptional objective circumstances” (i.e. the recent Russo-Turkish crisis), which basically prevents the Moscow Patriarch Kyrill and his delegation from visiting the City. That is why this Synaxis of Primates is meeting in Geneva and not in the Phanar, as originally planned.

The gathering in Geneva involves eleven of the fourteen Primates, with their delegations. Three are missing: Patriarch John of Antioch, Metropolitan Savvas of Warsaw and All Poland for health reason, and Archbishop Ieronymos of Athens and All Greece for personal reasons. The work of the Synaxis will continue until January 28th.

The convocation, “barring the unexpected,” of the Holy and Great Synod of the Orthodox Church this year in Constantinople was decided in March 2014 at the Synaxis of the Primates, which had gathered at the Phanar.

The themes of the Holy and Great Synod of the Orthodox Church includes the following ten topics:

2. The manner in which Autocephaly is assigned.

3. The manner of the administration of Autonomy in semi-independent Churches within the limits of Autocephalous Churches, such as the Orthodox Church of Finland under the jurisdiction of the Ecumenical Patriarchate.

4. The Diptychs. This is the order of the Autocephalous Churches, according to honor and ranking, by which the Primates are commemorated. The order of the Churches may change. (For example, the Church of Cyprus, although it is one of the most ancient and was recognized by the Third Ecumenical Synod in Ephesus in 431, is tenth in the order, having been surpassed by Patriarchates, which have been granted Autocephaly in recent times by the Ecumenical Patriarchate and not by an Ecumenical Synod.)

6. Canonical marriage impediments, especially in the case of Inter-Christian marriages.

7. Fasting. Ex. Should the canons for fasting on Wednesdays and Fridays be changed?

8. The relationship of the Orthodox Churches with the rest of the Christian world.

9. Orthodoxy and the Ecumenical Movement.

10. The contribution of local Orthodox Churches in the prevalence of Christian ideals of peace, freedom, brotherhood and love among people and removing racial and other discrimination.

The Ecumenical Patriarch Bartholomew, in his introductory speech at the opening session of the Synaxis in Geneva, stressed that “the great responsibility belongs to us now, without further delay, to convert this vision [of the Holy and Great Synod of the Orthodox Church]into a reality.”

* Update: According to the latest reports, it seems like the issues of the Diptychs, Autocephaly and the Calendar will be postponed for another future Pan-Orthodox Synod.
Share. Twitter Facebook Pinterest LinkedIn Tumblr Email
Previous ArticleFIVE BEST PRACTICES FOR THE GREAT COUNCIL OF THE ORTHODOX CHURCH
Next Article Greek Archdiocese Mourns the loss of Father John Romas, the Parish Priest of St. Nicholas Greek Church in Manhattan, that was destroyed on 9/11