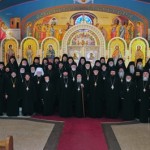 The Assembly of Canonical Orthodox Bishops of North and Central America held its third annual meeting for all member hierarchs, that is, all active canonical bishops in its region. The meeting was held from September 10-12, 2012, at the Chicago O’Hare Hilton in Chicago, Illinois. Forty-three bishops were in attendance.

The first plenary session opened on Monday morning, and began with prayer, followed by an address to the assembled hierarchs by the Chairman of the Assembly, Demetrios, Archbishop of the Greek Orthodox Archdiocese and Exarch of the Ecumenical Patriarchate (his address will soon be posted on the Assembly website).

The Archbishop expressed the sorrow of all present for the loss of Metropolitan Constantine of the Ukrainian Orthodox Church in the U.S., who fell asleep in the Lord since the last meeting of the Assembly. He also noted the absence of two brother bishops who had recently retired, Metropolitan Maximos of Pittsburgh and Metropolitan Jonah of Washington, D.C. Moreover, he welcomed the new bishops joining the Assembly since May 2011, the time of its last meeting: Bishop Sevastianos of the Greek Orthodox Archdiocese, Bishops Anthony, John, and Nicholas of the Antiochian Archdiocese, Bishop Daniil of the Bulgarian Diocese, Bishop Alexander of the Orthodox Church in America, and the newly-consecrated Bishop Pankratij of the Metropolis of Mexico.

Archbishop Justinian, the administrator of the parishes of the Moscow Patriarchate in the US and second vice-chairman of the Assembly, also addressed the hierarchs, reminding his brethren of the 200th anniversary of the founding of the southernmost Russian settlement in North America, Fort Ross in California, with its Orthodox Christian chapel dedicated to the Holy Trinity.

With the legal incorporation of the Assembly, one of the chief items on the agenda was the adoption of By-Laws for its governance. A draft was provided by a provisional By-Laws Committee, working in concert with the Committee for Legal Affairs. After some deliberation by the Assembly to insure that the By-Laws conformed both to civil and canon law, they were unanimously approved by the bishops.

A proposal was presented to the hierarchs by Metropolitan Methodios of Boston, the chair of the Committee for Canonical Affairs, for a comprehensive directory of all Orthodox clergy in our region, in accordance with Article 6 of the Rules of Operation. This would augment the Assembly’s already existing directories of bishops, parishes, monastic communities, and theological schools.

The second item, which occupied the Assembly during the whole of its business session on Tuesday, was the canonical organization of the Church in the United States. Archbishop Nicolae of the Romanian Orthodox Archdiocese in the Americas, the chair of the Committee for Canonical Regional Planning, presented the findings of his committee on the chief issues involved. The assembled hierarchs were asked to discuss with one another important questions about the future structure of the Church in North America, models of administration, its organization geographically, as well as its relationship with the Mother Churches. This it did together as a body as well as in small groups. In this continuing process, designed to prepare a plan for presentation to a future Great and Holy Council of the entire Orthodox Church worldwide, there was consensus on the part of all bishops that the canonical norms of the Church must be observed and that all canonical anomalies in North America must be resolved, so that the witness and mission of the Church of Christ might be strengthened and increased.

The Chairman, Archbishop Demetrios, stressed that this work is not about fixing past mistakes. The current canonical situation in North America, inappropriate though it is, came about on account of immigration from the Old World and various historical circumstances. This work should be seen as a positive, and necessary, progression down the path of Orthodoxy in this country. The Assembly directed the Committee for Canonical Regional Planning to continue its work and resolved to continue earnest discussion of this issue. While the Assembly realized that it is impossible to provide a definite time-frame, it nevertheless recognized that it is incumbent upon them to have a plan prepared to present to the Most Holy Autocephalous Churches.

All of the deliberations of the Assembly were characterized by sincere and open discussion and brotherly affection and amity among the bishops.

The Assembly also approved a budget for the coming year that lays primary emphasis upon the work of the various committees and the Secretariat. It adopted a policy to govern its relationship with the former SCOBA agencies and endorsed-organizations as well as important guidelines governing the delegation of legal and financial authority within the Assembly. It was announced that an external audit would be conducted by the Assembly after the end of this calendar year.

On the second day of meetings, the eleventh anniversary of the terrorist attacks on the United States, the hierarchs gathered at Holy Resurrection Serbian Orthodox Cathedral in Chicago, where they prayed the liturgy together, commemorating the Beheading of the holy Baptist and Forerunner John (according to the Old Calendar), and partook in the unity of the Eucharist through shared fellowship in the holy Body and precious Blood of our Lord Jesus Christ, who is the Head of the Church and only Source of unity. The Liturgy was served by Fr. Radovan Jakovljevic and Deacon Nikolaj Kostur and was presided over by Bishop Longin of the Serbian Orthodox Church. Following the Liturgy, Archbishop Demetrios led all present in a memorial service for those who died in the aforementioned terrorist attacks as well as prayers for mercy for the survivors and the families of all those who perished that day.

The Assembly of Bishops has published a Message to the faithful.