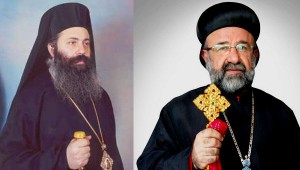 Syrian archbishops Yohanna Ibrahim and Boulos Yazigi have not been heard from since they were abducted in Syria in April 2013. (Image source: Syrian media)

It’s been two years since two top Christian clergymen were kidnapped by gunmen in Syria, prompting the brother of one of the victims – himself a senior cleric – to raise alarm that “the world is silent.”

“We hope that the bishops are alive, but unfortunately the world is silent and nobody has provided physical evidence,” Orthodox Patriarch John X of Antioch said last week on the anniversary of their disappearance, the Catholic Herald reported.

Raising concerns about their fate, no group has claimed responsibility for their abduction.

“We tried to negotiate with those who can help in this matter, but unfortunately there was total silence,” said John, the brother of the Greek Orthodox Archbishop Boulous.

“No side has actually claimed responsibility for the kidnapping but we still have hope that the two bishops are alive, and there is more good news than bad news,” Machnouk said according to Lebanon’s Daily Star at a Beirut ceremony last week marking the anniversary of their disappearance.

Machnouk, himself a Sunni Muslim, berated Islamist extremists, calling them “terrorists” and “intruders” to Islam.

“Syria, Lebanon, Iraq and all eastern countries contain terrorists who pretend to be religious while they do not represent us,” Machnouk said. “They hold on to the peel thinking it’s the core. They are intruders to our religion.”

Along with no claims of responsibility, there have been no demands for ransom as well.

John L. Allen, Jr., associate editor of the website Crux which covers Catholic issues, quoted “Ora Pro Siria,” a blog by Italian missionaries which reported in 2013 that the going price for a kidnapped priest in the Middle East was then around $200,000.

Allen quoted Archbishop Jean-Clement Jeanbart of the Greek Melkite church in Aleppo who warned, “We are in grave danger; we may disappear soon.”

Jeanbart added that he believes the moderate opposition in Syria is being hijacked by “radical Muslim factions calling for jihad and exclusion, a kind of apartheid for all non-Muslims.”