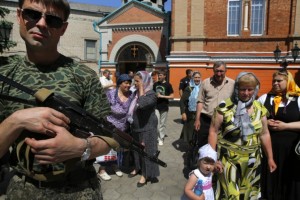 Ukrainian Greek-Catholic bishops from around the world, meeting in Lviv for their annual Holy Synod, have appealed to the international community to help restore peace in Ukraine.

It said there were reports of heavy fighting near the airport in Donetsk, one of the main rebel-held cities despite there being an official ceasefire between Ukraine and Russian-backed separatists.

Yatsenyuk said Ukraine is “in a stage of war” with the “key aggressor” being Russia.

Ukraine and Western countries accuse Russia of intervening on the side of pro-Russian rebels in eastern Ukraine but Moscow denies this.

For their part the bishops also decried the “unprecedented level of hatred and distortion” taking place in the media.