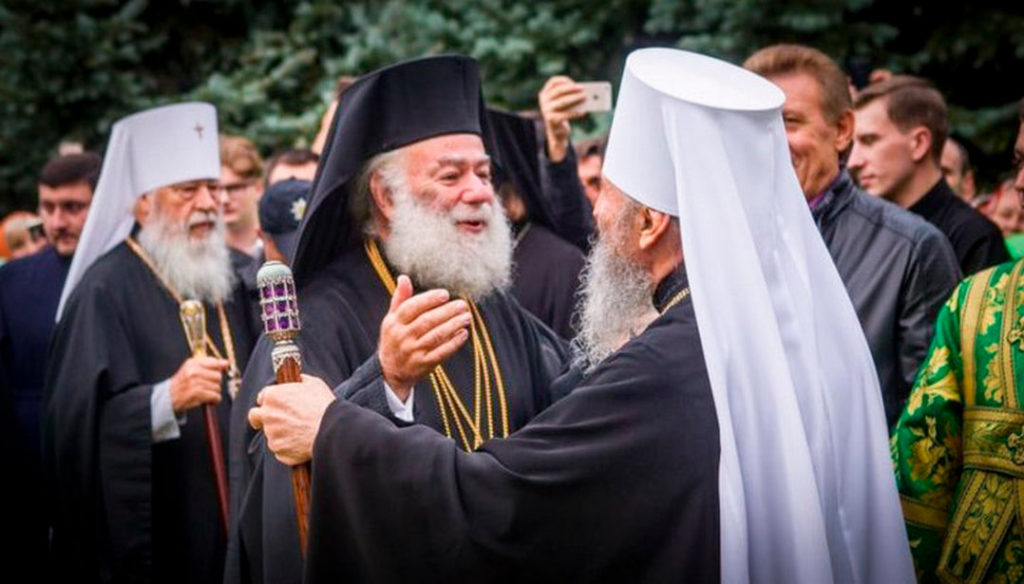 Most recently, the Patriarch of Alexandria has called upon Ukrainian believers to be faithful to the Church and His Beatitude Onuphry. Photo: eparhiya.od.ua

Unfortunately, the Patriarch of Alexandria was unable to withstand external pressure from the Phanar, the authorities of Greece and the United States.

Archpriest Nikolai Danilevich, Deputy Head of the Department for External Church Relations of the UOC, commented exclusively for the UOJ on the recognition of the OCU by the Patriarchate of Alexandria.

“Patriarch Theodore of Alexandria today mentioned Epiphany at the service, which means he recognized the OCU. And a year ago in Odessa he said: “Hold on to His Beatitude Metropolitan Onuphry.” He supported our Church, supported so much that Eustratiy Zoria from the “Kiev Patriarchate” called his words “Alexandrian jeans”. And now, everything is completely different,” Archpriest Nikolai shared his impressions.

He recalled that Patriarch Theodore studied in Odessa, was previously a representative of the Alexandrian Patriarchate in Ukraine and knows the Russian language, which is rare for the Greeks.

“Therefore, he is well informed about everything that is really happening here in Ukraine,” the clergyman emphasized. “There can no longer be an excuse that, they say, the patriarch is unaware of the real state of affairs, that our Church did not inform, etc. Unfortunately, all this can be regarded only as weakness and faintheartedness, which led to betrayal.”

“Patriarch Theodore could not stand the pressure from the Phanar, the authorities of Greece and the United States. The Patriarchate of Alexandria is the same Greeks who remained on the African continent after Byzantium. They are few there, but they are united by Greek solidarity and nationalism. It is significant that recognition comes from the Greek Churches: Hellas, Constantinople, Alexandria – these are all Greeks or their remnants outside Greece.”

Unfortunately, world Orthodoxy is inexorably moving toward a schism, the spokesman for the UOC said. The Phanar, which established a parallel hierarchy in Ukraine, is to blame for that, noted Archpriest Nikolai and at the same time called on the believers to calmly relate to the situation, recalling the saving words of the Holy Scripture:

“Very truly I tell you, you will weep and mourn while the world rejoices. You will grieve, but your grief will turn to joy.” (John 16:20)

The clergyman also provided a link to the video, which especially emphasizes the contrast of the previous and current attitudes of Patriarch Theodore to His Beatitude Onuphry and to the Church he leads.

We recall that back in June 2019, Patriarch Theodore of Alexandria said that the religious conflict in Ukraine can be resolved if you do not put your interests above the interests of the Church. “I lived in Ukraine, I experienced the pain and the schism in the Ukrainian Church. But I also know the Russian Church very well because I lived in its bowels for ten years, and the Patriarchate of Alexandria has emotional ties with it,” he said then. Patriarch Theodore also said that the Church was divided by people who received autocephaly in Ukraine. “Now we see that Filaret (the head of the UOC-KP Filaret Denisenko – Ed.) is convening the Council in order to annul the decisions of the ‘Unification Council’,” concluded the Primate of the Church of Alexandria.

However, already on November 8, 2019, Patriarch Theodore of Alexandria commemorated the head of the OCU Epiphany Dumenko at the liturgy.