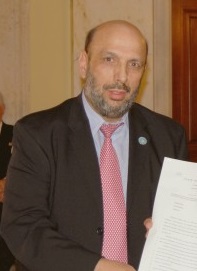 It has come to our attention that word has been circulating that the Archdiocese is thinking of electing new auxiliary Bishops “in order to take care of some celibate priests.”

The last was Bishop Apostolos of Medeia, who was elected in November, 2014, and who currently serves as Chancellor to Metropolitan Gerasimos of San Francisco. Let me remind everyone that it was Gerasimos who recommended and propelled him initially, but now his is pulling his hair out about that, to the point that he asked for Apostolos’ removal as TNH revealed last November.

The question that has come again to light is: do we need more bishops at the Archdiocese?

I remind you that we have eight Metropolitans: Iakovos of Chicago, Methodios of Boston, Isaiah of Denver, Alexios of Atlanta, Nicholas of Detroit, Savas of Pittsburgh, Gerasimos of San Francisco, and Evangelos of New Jersey. Also, Archbishop Demetrios, who has the Archpastoral responsibility for the so-called Direct Archdiocesan District. The canonical and proper title of the Archbishop should have been Metropolitan of New York and Archbishop of All America. This issue and many other issues should be dealt with at some point in the Charter, which has a lot of shortcomings and thus some ecclesiological irregularities occur, especially when the Archbishop visits a Metropolis and he is commemorated as “poimenarhis – shepherd,” while from Monday to Saturday the local Metropolitan is commemorated as “poimenarhis.”

Bishops Demetrios and Apostolos serve as chancellors “on loan” from the Archbishop, which means he can recall them to the Archdiocese anytime.

But TNH has learned that Demetrios doesn’t want them near him for his own reasons. He didn’t want them to be elevated to the bishopric rank but was pressed to do that by the Patriarchate and certain Phanar hierarchs. There is a whole circle or club that tries to promote their own.

The opinion that exists today among the clergy and laity is that we have more than enough bishops; we don’t need any more even for the basic reason that they cost the Archdiocese a lot of money. I would like to simply remind everyone that the Archdiocese is not a soulless building. It is the People of God, who pay with their offerings, the candles, the trays, the donations, the annual contributions that are nowadays called “stewardships,” the Greek Festivals with the roasted lambs and, of course, the famous loukoumades, the salaries and the benefits of everyone at the Archdiocese, including the metropolitans and bishops.

At least in Greece, where there is also a plethora of metropolitans and bishops, they are paid from the European loans by the bankrupt Greek State. Included among them are those who Patriarch Bartholomew ordains, who often go around in Greece doing funerals, weddings, and panegyrics. Here in the United States, things are different, because we are not, thank God, a State Church, and all the expenses are covered by the faithful.

Moreover, many of the hierarchs, including Archbishop Demetrios, are of advanced age, and it would be beneficial to start retiring the active ministry; they have served enough. Of course, the question of with whom are they going to be replaced could cause some people to pull their hair from their heads. If we dare to look at the official list of the Archimandrites who are eligible to become bishops simply because they are celibates, we would really start crying.

I worry so much about the future. Our generation could show some understanding and even tolerance about the despotic behavior of some hierarchs, their legalistic mentality, and the constant begging for more and more money from the parishes, but make no mistake that our children and grandchildren will not tolerate them. They have already begun to turn their back on them, and they consider most of them irrelevant.

Talking with young Greek-Orthodox men and women who have been successful in their fields of science, medicine, law, and academia, they care about the Faith and the Church, but they have difficulties accepting the careerist bishops and priests of the institutionalized ecclesial structure and life. The Byzantine fanfare, including the archaic canons and fundamentalist mentality do not have any meaning for the contemporary generations.

Perhaps the rediscovery and return to the original Tradition of the Church of married Bishops could be a solution, because it is one thing to select a Bishop from a pool of 25 celibate candidates and another to select from a pool of 700. The career archimandritism and the unnatural imposition of celibacy have caused dead ends and many scandals. Indubitably, there are also married priests who are problematic and limited in many ways, but less so than the celibates. Also, there are celibates who are real gems: men with ethos and physiologically balanced and healthy.

With all due respect to the high priesthood, I think that today’s hierarchs are simply bureaucratic managers of the ecclesiastical life, and in many cases they are failing managers. The charisma of paternity, the vision, the care, the desire for the building of the Body of Christ are absent. The mind of Christ is lost in the many programs and “ministries” and in the legalistic approaches of the archaic canons and the hundreds of regulations. Don’t we see the withering in our empty naves?