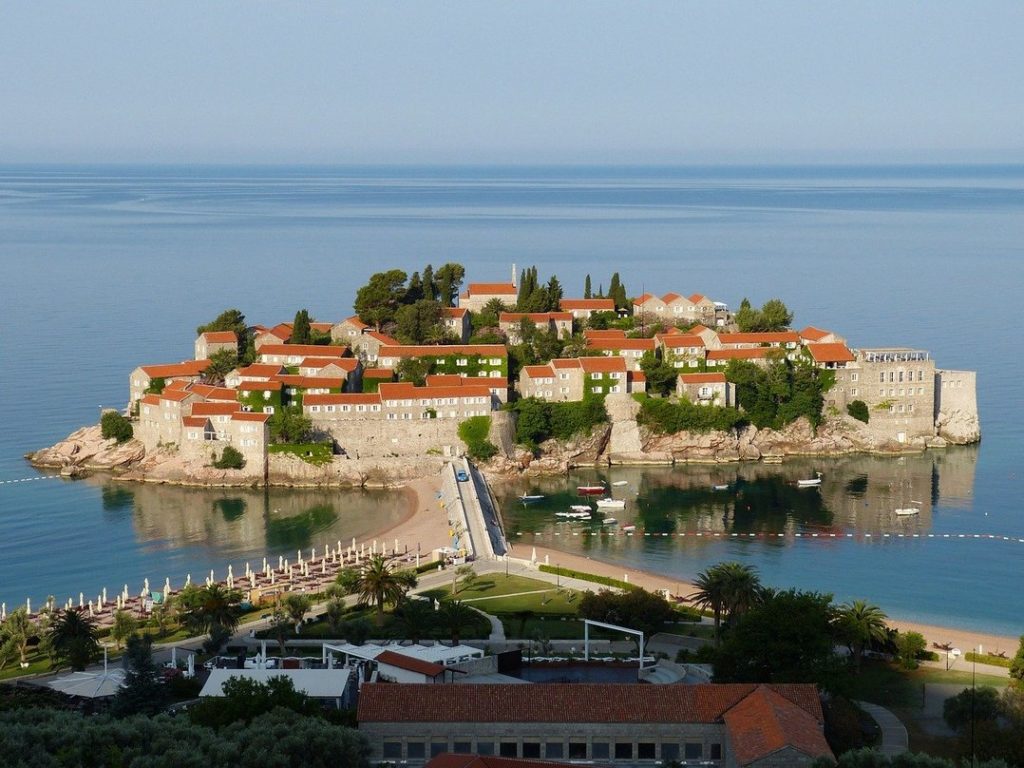 Sveti Stefan island in Budva in a beautiful summer day, Montenegro / Image by falco from Pixabay

“Religion is the sigh of the oppressed creature, the heart of a heartless world, and the soul of soulless conditions. It is the opium of the people.” So Karl Marx wrote in 1843. For three generations over the course of the 20th century his atheist disciples violently sought to break their subjects of this “opium” addiction.

They failed. In many though not all parts of the former communist bloc Christianity not only survived but provided the impetus for national and social revival. In some countries, like Poland, Hungary, and Lithuania, this meant Roman Catholicism. In others, like Russia, Ukraine, Serbia, and Georgia, this means Orthodoxy.

For the no-less-godless successors of the commissars now ruling most of Europe through the twin bureaucracies of NATO and the European Union, religion – or at least Christianity – remains a retrograde force that needs to be overcome. They are helped by the fact that in western Europe (and increasingly in the United States) consumerism, feminism, LGBT, multiculturalism, and other materialistic post-modern alternatives have proved to be far more corrosive of Christianity than dynamite, bullets, concentration camps, and punitive psychiatric hospitals.

There is also a geopolitical element. Because NATO/EU’s biggest target is Russia, and because revival of the Orthodox Church is central to Russia’s revival – including its military determination to resist western aggression as it has so many times in the past from Germany, Sweden, Poland, France, etc. – the Orthodox Church is itself in the crosshairs. From the soulless perspective of western bureaucrats Orthodox Christianity is nothing more than an instrument of the Kremlin’s soft power. According to one person rather new to the relevant issues but nonetheless considered authoritative by the State Department:

‘The Church, for its part, acts as the Russian state’s soft power arm, exerting its authority in ways that assist the Kremlin in spreading Russian influence both in Russia’s immediate neighborhood as well as around the globe. The Kremlin assists the Church, as well, working to increase its reach. Vladimir Yakunin, one of Putin’s inner circle and a devout member of the ROC, facilitated in 2007 the reconciliation of the ROC with the Russian Orthodox Church in Exile (which had separated itself from the Moscow Patriarchate early in the Soviet era so as not to be co-opted by the new Bolshevik state), which reconciliation greatly increased [Patriarch of Moscow] Kirill’s influence and authority outside of Russia. Putin, praising this event, noted the interrelation of the growth of ROC authority abroad with his own international goals: “The revival of the church unity is a crucial condition for revival of lost unity of the whole ‘Russian world’, which has always had the Orthodox faith as one of its foundations.”’

Thus the 250-million-plus-member Orthodox Church needs to be brought to heel, or better yet, broken. Over the past few years we have seen several episodes pointing to that end:

The real reasons for this were transparently political. Vladika Artemije was punished for his forthright opposition to US, NATO, and EU policy in Kosovo and his spearheading a Washington lobbying effort to oppose creation of that terrorist-mafia pseudo-state (and hotbed of Islamic jihad) under NATO protection. In addition, he sued the NATO powers in the European Court of Human Rights in Strasbourg, and in 2009 sought to bar a visit by then-US Vice President and current 2020 presidential candidate Joe Biden (a belligerent proponent of war against Serbs in Bosnia and Kosovo and of detaching Kosovo from Serbia, not to mention a Ukraine profiteer via his son Hunter Biden) from visiting Visoki Dečani monastery – a decision overturned by the Serbian Church at the behest of the Serbian government, then headed by western quisling Boris Tadic. The Biden snub reportedly prompted a high NATO official (probably US Admiral Mark P. Fitzgerald, then Commander, US Naval Forces Europe and Africa, and Commander, Allied Joint Force Command (JFC) Naples) to demand: “What we need here is a more cooperative bishop.” The soon got it, with the shameful submission of the Serbian Church under pressure from Washington, Brussels, and Belgrade officialdom. (As noted below, the Serbian Church leadership’s betrayal of Vladika Artemije has now come back to haunt them in Montenegro.)

US officials who wouldn’t know Orthodoxy from orthodontia have taken a keen interest in the Church’s internal canonical arrangements, insisting that creation of the bogus “OCU” is an exercise in human rights and “religious freedom,” despite violence against clergy and believers of the canonical Church and plans to seize churches and monasteries. Among the outspoken supporters of the OCU are celebrated theologians like US Secretary of State Mike Pompeo (who placed a personal call to the “newly elected head of the “OCU” “Metropolitan Epifaniy” (Dumenko), Geoffrey Pyatt (current US Ambassador to Greece, who was also Ambassador to Ukraine during the 2014 regime change operation), Sam Brownback (US Ambassador at Large for International Religious Freedom), and – recognizable to many Americans from their impeachment testimony – US Special Representative for Ukraine Kurt Volker and US Ambassador in Kiev Marie Yovanovitch (noted for her over-the-top LGBT promotion in Ukraine). Pyatt and Brownback are notable for their round-robin visits to Orthodox Church leaders, notably in the Balkans, to “encourage” their recognition of the Ukrainian schismatics.

The sexual social subversion campaign arrived in Georgia this summer, when the usual suspects – foreign embassies and their controlled NGOs, working in concert with George Soros’s Open Society groups – were determined to hold Tbilisi’s first Pride parade. With strong opposition from Orthodox faithful led by activist businessman and father of eight children Levan Vasadze, the parade was cancelled. Forced to back down, the pro-western, pro-LGBT forces responded with violence, using as their pretext a visit by international (including – Russian!) lawmakers to the Georgian parliament under the auspices of the Athens-based Interparliamentary Assembly on Orthodoxy (IAO). Endorsed by Tbilisi Pride organizers, the parliamentary attack was spearheaded by the United National Movement, the party of disgraced former president and Western favorite Mikheil Saakashvili (who is in self-imposed exile, fleeing from his conviction on corruption charges). The Georgian parliamentary Speaker was compelled to resign and questions were raised as to whether the ruling Georgian Dream reformist party could retain power – which surely was the point in the first place. The country’s politics continue to be unstable, with forces defending Georgia’s Orthodox Christian integrity denounced as “far right” by hatemongers in the west.

‘Montenegro’s ruling regime rammed the controversial law through the parliament in the dead of night between Thursday and Friday. Every single amendment of the opposition Democratic Front (DF) – proposed to alleviate concerns that the bill was deliberately targeting the Serbian Orthodox Church (SOC) – was rejected. When some DF members disrupted the session in protest, all of them were arrested and jailed. [ … ] [JGJ: Some of the detained legislators have declared a hunger strike.]

‘The government in Podgorica has waved off criticism, saying that the law is in line with the highest EU and international human rights standards. [JGJ: A de facto endorsement from the Vienna Commission says it all.] Most journalists have been happy to take that at face value. Not being most journalists, I actually read its text.

‘Article 11 mandates that any religious community in Montenegro must be headquartered there and cannot extend outside its borders. That’s absurd for a country that’s about the size of Connecticut, with a population estimated at around 620,000.

‘Article 16 says that no religious community may have in its name “an official name of another country or its emblems.” Article 7 bans “abuse of religious feelings for political ends,” whatever that may mean. And Article 24 says that the state can seize the property of any religious community that is determined by police to have violated the terms of its registration and been stricken from the rolls, without appeal. Need one go on?

‘Now consider that President Milo Djukanovic has recently accused the SOC of “promoting pro-Serb policies that are aimed at undermining Montenegrin statehood,” as Reuters phrased it, and it becomes blindingly obvious for whom the bell tolls.’

In a close replay of the Ukraine situation, the new Montenegrin law sets the stage for state seizures of Church properties and turning them over to an unrecognized schismatic group, the so-called “Montenegrin Orthodox Church,” sponsored by the corrupt regime of President Milo Djukanovic. Protests have broken out in both Montenegro and Serbia, with Montenegrin police very democratically beating some protesters, including a Bishop of the canonical Church. In Belgrade, the ruling Holy Synod of the Serbian Orthodox Church denounced the new law and stated its support for the canonical Church. (Belgrade has been stalwart in its support for the legitimate Church in Ukraine. But perhaps, now that they’re being targeted themselves, some of the Serbian hierarchs may remember how shabbily they treated Vladika Artemije in their vain attempt to appease western demands – and will take steps to remedy that shameful mistake?)

It remains to be seen what western governments will do, but based on the Ukraine precedent it isn’t hard to guess. Comments Malic: “Adopting a ‘religious freedom’ law that opens the door to persecuting a particular faith would normally be seen as a horrifying breach of human rights, but when done to Orthodox Serbs in Montenegro, the West doesn’t seem to mind.” As of this moment, except for a non-specific demonstration alert, there is no posted statement from the US Embassy in Podgorica, either in English or in some language written exclusively in the Latin (not Cyrillic) alphabet called “Crnogorski,” evidently a reference to Serbian. (Foreign embassies in Washington take note! Start posting your websites in “American,” not English!)

Now all that’s needed to ice the cake is for the State Department’s human rights, religious freedom and democracy mavens and the US Commission on International Religious Freedom – which, with Your Working Boy’s culpability, has long since become little more than another subjective standard under which countries the Washington apparat wants to hammer can be cited (accurately or not) – to hail Montenegro’s latest step into the radiant, post-Christian, post-national future of Euro-Atlantic integration.

But who knows. Maybe we’ll be pleasantly surprised and Washington and Brussels will demand that their Montenegrin flunkies back off. Don’t bet on it though. There’s still a lot more of the Orthodox Church left to disrupt.