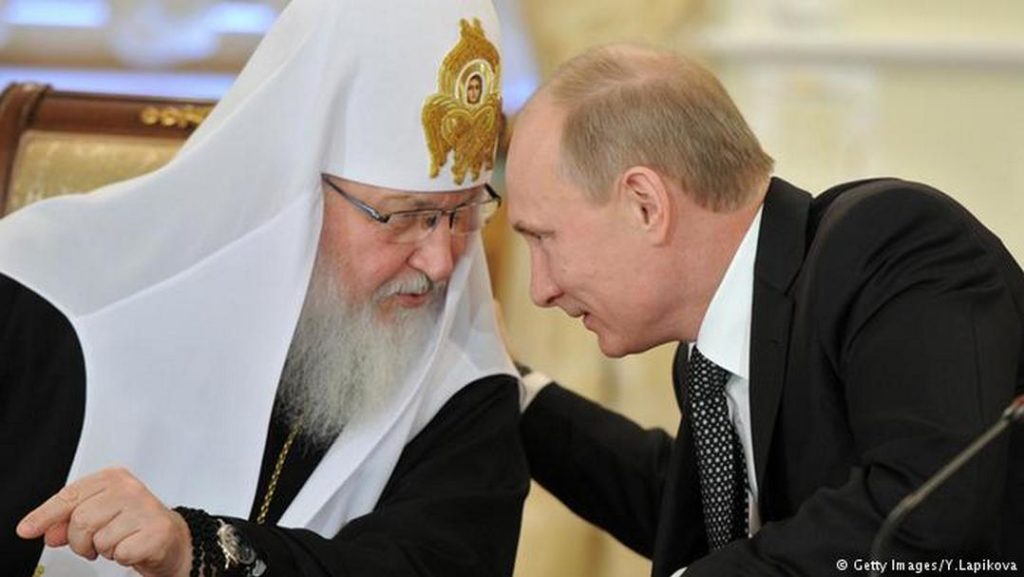 In recent weeks a number of conflicting news items related to Ukraine have appeared in various sources which combine to demonstrate the scope of “Byzantine symphonia” in its 21st-century Russian reincarnation.

As I noted previously on these pages, the expression denotes a religious-political ideology from Orthodox Byzantium according to which church and state were said to speak with a single voice. This produced mixed outcomes in the Byzantine Empire, and later in Tsarist Russia, resulting in some of the most shameful pages in the history of the Orthodox Church. In Russia’s case, we have only to recall the brutal persecution of its Old Believers from the middle of the 17th century over how to make the sign of the cross and which prayer books to use.

This made it all the more ominous when, at the state-sponsored banquet in honor of his enthronement as Patriarch of Moscow in February 2009, former KGB agent Kirill Gundyaev expatiated on the restoration of Byzantine symphonia as his vision for the Russian Orthodox Church’s relations with the Kremlin in the Vladimir Putin era. The ensuing 10 years have shown how this plays out in the lives of real human beings in Russia and its ever-widening sphere of influence. Implicitly or explicitly, the Russian Church has supported the draconian response to Pussy Riot’s 2012 protest in Christ the Saviour Cathedral; repressive LGBT laws and the willful blindness of law enforcement and the judiciary to incidents of homophobic violence on Russia’s streets; the weakening of legal redress for children and women subjected to domestic violence; the Kremlin’s geopolitical aggressions near and far, including the unlawful annexation of Crimea, election meddling in the US and elsewhere, Russia’s invasion of Ukraine, and the acceleration of hostilities in the wake of the Ukrainian Church’s autocephaly. The list goes on and on.

The creation of a Russian Orthodox diocese in December to cover a part of the planet where there is no need for it—Singapore, Vietnam, Indonesia, Cambodia, North Korea, Laos, Malaysia, Myanmar, the Philippines, Thailand—seems to have no other motive than to extend the tentacles of the “Russian world” farther and farther abroad and to usurp Constantinople’s canonical role in the Orthodox Church by means of the Moscow Patriarchate’s “Third Rome” fantasies.

Another way in which church and state collude in Russia entails their joint disinformation campaign against Ukraine. This brings us to the news items referenced at the top of this article.

On Feb. 23, the Kyiv Post reported on the transfer of 340 parishes in Ukraine from the Moscow Patriarchate to the newly autocephalous Orthodox Church of Ukraine (OCU). These figures come from the Religious Affairs and Nationalities Department of the Ministry of Ukrainian Culture. The MP, however, alleges a full tenfold exaggeration of the numbers, and claims that only 36 parishes have transferred due to “insane pressure.”

(According to the independently curated Russia Religion News, the number of parish transfers from the MP to the OCU exceeded 450 by March 8.)

On the same day as the Kyiv Post report, the Euromaidan Press ran a piece in which the Ukrainian Security Service (SBU) uncovered a plan—directed by the Kremlin—to perpetrate arson attacks against MP church buildings in Ukraine and to blame OCU sympathizers.

On Feb. 26, the Russian Orthodox Church’s Department for External Church Relations —chaired by Metropolitan Hilarion Alfeev and arguably the MP’s main propaganda arm—published a statement on its website alleging the persecution of its faithful in Ukraine and the forcible expropriation of its parishes and monasteries by the OCU. The DECR’s statement can only be read against the backdrop of the “prediction” of bloodshed in Ukraine which the MP made at the end of December.

Finally, on March 3 Radio Free Europe reported on the arrest and release of the OCU’s Archbishop Kliment in Russian-occupied Crimea. This incident seems to have served no other purpose than to commit a flagrant act of harassment against, and to instill fear in, the archbishop and his flock.

It comes as no surprise to seasoned Russia-observers in the West that “reporting” from the state-controlled media—among which we must count the Russian Church’s DECR—serves to confuse, obfuscate, prevaricate, and dissemble. It is seldom ever corroborated by independent news sources or able to stand up under even the most cursory scrutiny.

Setting aside the fact that, to the best of my knowledge, no one has ever reported on the “persecution” of Russian Orthodox Christians in Ukraine, the MP’s rebuttal of the number of parish transfers to the OCU makes no sense.

For one thing, the MP has an estimated 12,000 parishes in Ukraine. If we take the Ministry of Ukrainian Culture at its word on February 23, seven weeks after the grant of autocephaly by the Ecumenical Patriarchate, and three weeks after the enthronement of Metropolitan Epiphanius, a mere 2.85% of Ukraine’s MP parishes had transferred to the OCU. The Ministry could have certainly done a better job of inflating the numbers if this had been its intention.

For another, the MP’s counterclaim that only 36 parishes had transferred—so statistically insignificant at .03% as to be virtually nonexistent—underscores the absurdity of the allegation of “insane pressure” against the MP’s faithful in Ukraine.

Let there be no confusion here. Russia and its de facto state church are no friends of Ukraine. As recently as Aug. 31 in his remarks to Ecumenical Patriarch Bartholomew, Patriarch Kirill rejected the very idea of a Ukrainian nation independent from Russia as a 19th-century “uniate” invention. In April of last year the SBU began to investigate the MP’s Ukrainian apparatus for its suspected activities in support of Russia’s war against Ukraine. (See also Halya Coynash’s report from February 2018.)

The Kremlin and the Moscow Patriarchate share a single agenda for Ukraine: to swallow it up in its neo-Tsarist-Soviet Empire. Nothing they say to the contrary can be believed. They have cried wolf too many times.

Giacomo Sanfilippo is an Orthodox Christian of Ukrainian and Lemko descent on his mother’s side, a PhD student in Theological Studies at Trinity College in the University of Toronto, and the founding editor of Orthodoxy in Dialogue. He holds a BA in Sexuality Studies from York University and an MA in Theology from Regis College, both in Toronto, and is an alumnus of the Mark S. Bonham Centre for Sexual Diversity Studies at the University of Toronto. Earlier in life he completed the course work for the MDiv at St. Vladimir’s Orthodox Theological Seminary near New York City. Orthodoxy in Dialogue has an extensive Ukraine section in its Archives by the Author.