[ditty_news_ticker id="27897"] YOUR DUTY IS TO REALIZE THE WISDOM OF OUR ACTIONS—PAT. BARTHOLOMEW TO ALBANIAN CHURCH 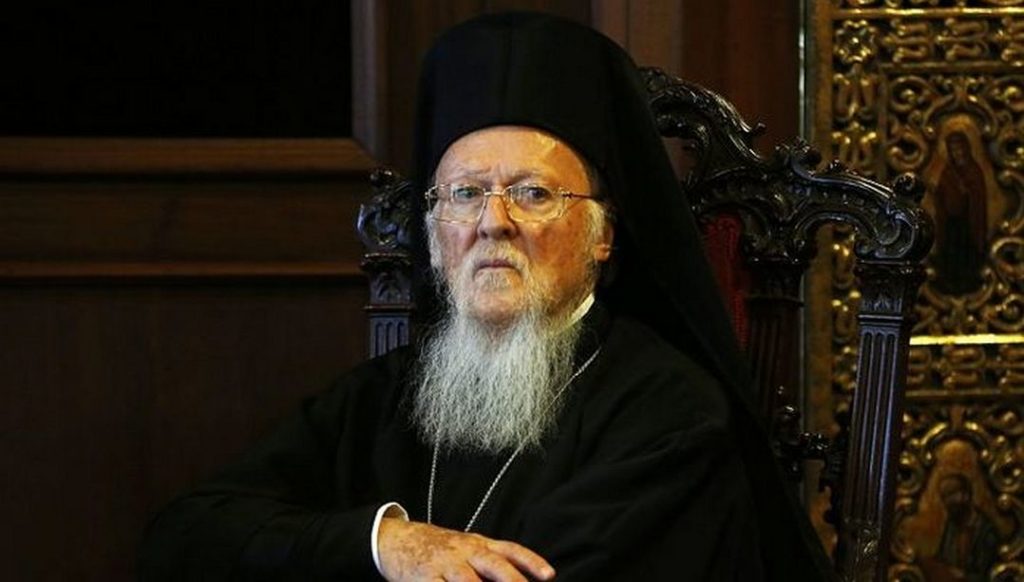 Istanbul, March 13, 2019 – The Orthodox Churches have no right to speak on the matter of the Ukrainian crisis other than to affirm the decisions and actions of the Patriarchate of Constantinople, according to Patriarch Bartholomew’s reply to the Albanian Church that was recently published in Greek and subsequently in Russian.

In December, Pat. Bartholomew wrote to the primates of the Orthodox Churches throughout the world, calling on them to recognize the results of December 15’s “unification council” that created a new ecclesiastical structure in Ukraine. On January 14, the Albanian Church responded that while it cannot accept the Russian Church’s decision to break communion with Constantinople, it also has serious issues with Constantinople’s decision to accept the hierarchs and clergy o the Ukrainian schismatic groups whose ordinations are devoid of grace and the action of Holy Spirit. They also lament that the creation of a new “autocephalous” church did nothing to create unity in Ukraine, but conversely, has only deepened the divisions there and threatens a schism in the entire Orthodox world.

In the reply, Pat. Bartholomew laments that the “Mother Church and the Patriarch himself” are being “slandered” by those who benefit from misinterpreting Constantinople’s actions.

This echoes statements he made in early January, that he would not change course on the Ukrainian issue no matter what the Local Churches say, as they need to learn to respect Constantinople more: “We pray that the sister Churches which unjustly oppose the decisions and initiatives of the first throne of the Constantinople Church would finally begin to think logically and fairly, with great respect and gratitude to the Church of our Ecumenical Patriarchate.”

‘Therefore,” the Patriarch writes to the Albanian Synod, “it is up to you to realize the truths that have been spoken, not to ratify them.” This echoes the Patriarch’s statement from October that, in the end, the Russian Church will have no choice but to obey its decisions.

For Constantinople, it is a matter of having enough respect for the Patriarchate of Constantinople to simply accept whatever decisions and actions it makes, while the Synods, primates, and hierarchs from the various Local Churches have shown that they believe that these actions and decisions should be evaluated as to whether they are true to Orthodox ecclesiology and canon law.

As is typical for his statements on this matter, Pat. Bartholomew also states that the Patriarchate acts only out of love and the desire for good order, not out of self-interest or any other motive, including political. However, there have been voices throughout the Orthodox Church recognizing the opposite in the Patriarchate’s actions. For example, His Eminence Metropolitan Amfilohije of Montenegro of the Serbian Church said of Pat. Bartholomew in December that “His love of power has led to great sorrow in Ukraine, to discord that is catastrophic for the future not only of Ukraine and all the Slavic peoples, but at the same time for all of Orthodoxy.”

Moreover, the recent news that Constantinople is in fact receiving a number of buildings, premises, and other properties in exchange for the tomos of autocephaly invalidates the claim that the Patriarchate did not act out of any self-interest.

Pat. Bartholomew also repeats his Patriarchate’s assertion that the canons of the Church grant universal jurisdiction to Constantinople, to hear appeals and intervene in situations in any Church’s territory—an assertion that has been heard more and more frequently in the context of the ongoing Ukrainian crisis. For example, in his letter to Alexander Drabinko, one of the two bishops who defected from the canonical Church, in which Pat. Bartholomew received him into his jurisdiction (without a canonical release from the Ukrainian Church) on the eve of the “unification council,” he wrote that Constantinople “indisputably has the responsibility to judge ecclesiastical matters everywhere and to give them a final conclusion.”

The same assertion was also made in the tomos granted to the Ukrainian schismatic church. However, St. Nikodemos the Hagiorite, the Church’s foremost canonist, writes that “the Bishop of Constantinople has no authority to officiate in the dioceses and parishes of other Patriarchs, nor has he been given by this Canon [Canon 9 of Constantinople—O.C.] to grant a decision in reference to an appeal on the part of the whole Church.”

Further, Pat. Bartholomew notes that the newest autocephalies were granted by Constantinople, but degrades the independent statutes of these Churches at the same time. “The newest and so-called ‘autocephalies,’” he terms them, reflecting Constantinople’s conviction that the autocephaly of any Church except for the four ancient Patriarchates and the Church of Cyprus can, in fact, be revoked by Constantinople, as they were never explicitly confirmed by an Ecumenical Council. However, their autocephalous status was confirmed by the organizational makeup of the Crete Council of 2016, which Constantinople considers to be binding on all Orthodox Churches.

Moreover, it should be noted that most of these autocephalous were granted to Churches that were formerly precisely under the jurisdiction of Constantinople, such as the Russian Church, whereas Ukraine is not under Constantinople’s jurisdiction and thus its intervention there is non-canonical.

Also regarding the canonical tradition, Pat. Bartholomew writes that he included with his letter a study on the reality of ordinations celebrated by schismatic or deposed bishops, which would mean by extension that Constantinople recognizes the hierarchs and clergy of the various Old Calendarist groups as true clergy.

“However,” the Union of Orthodox Journalists writes, “in the very document, at the very beginning, Metropolitan Basil of Smyrna recognizes that on the basis of the sacred canons of the Church, it is impossible to draw a conclusion about the effectiveness of such schismatic ‘ordinations.’”

Pat. Bartholomew also offers several historical examples of schismatic ordinations being accepted by the Church: the Meletian schism in the early Church, the case of the Bulgarian Church from 1872 to 1945, and the reunion of ROCOR with the Moscow Patriarchate. However, none of these situations are analogous, as none of them involves one Patriarchate interfering in the life of another to cancel legitimate excommunications and anathematizations and create an entirely new structure within another Church’s territory. The case of ROCOR is especially helpful in that we see a Church body, which was never fully out of communion with the Church, returning precisely to the body from which it had separated.