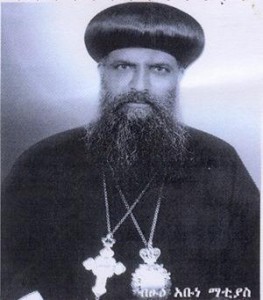 As the Roman Catholic Church in the Vatican prepares to elect a new Pope under much media scrutiny and fanfare, one of the oldest Christian churches has already chosen its own new leader with much less global attention.

The Ethiopian Orthodox Church has elected Abune Matthias as its new patriarch, replacing Abune Paulos, who died of an undisclosed illness last August after leading the church since 1992. (‘Abune’ means ‘Our Father’ in the Ethiopian language.)

Daniel Sefermikael, a church official, said Matthias received a majority of votes — 500 out of 806 — cast by church members in Ethiopia and elsewhere, Agence France Presse reported.

The 71-year-old Matthias, who fled Ethiopia after a military coup by Hailemariam Mengistu in 1974, has travelled throughout the Middle East, Europe and North America in exile for decades. He will now settle in his homeland to run the church.

On Sunday he will be sworn in at an official ceremony at Holy Trinity Cathedral in the capital of Addis Ababa before an expected throng of thousands of people.

According to a blog run by an Ethiopian lawyer named Daniel Berhane, Abune Matthias was born Aba Teklemariam Asrat and was ordained as a deacon in the mid-1950s. Just prior to his election as patriarch of the Ethiopian Orthodox Church, he served as Archbishop of the Church’s monastery in Jerusalem.

Ethiopia is home to one of the oldest Christian churches in the world — almost two-thirds (63 percent) of the country’s population is Christian, with most of them — between 40-million and 45-million — belonging to the Orthodox branch, which is officially known as Ethiopian Orthodox Tewahedo Church.

The Church was long part of Egypt’s Coptic Church, based in Alexandria, but in 1959, it was allowed to break away and establish its own patriarch and hierarchy. Matthias will be the sixth such patriarch of the Ethiopian church.

Orthodox Christianity became Ethiopia’s established church in the 4th century AD. Legend has it that Ethiopia was evangelized by a Roman citizen of Tyre (now Lebanon) named Frumentius who became shipwrecked off the African coast along the Red Sea. He gained the confidence of the emperor and converted his son, who became Emperor Ezana, who later introduced Christianity as the state religion.

According to the Catholic Near East Welfare Association (CNEWA), the Ethiopian Church “reached its zenith in the 15th century when much creative theological and spiritual literature was produced and the church was engaged in extensive missionary activity.”

Interestingly, the Ethiopian Orthodox church has retained many Jewish practices from the Old Testament, including circumcision, and the observance of dietary laws.

UNESCO has declared a cluster of eleven ancient churches in Lalibela in northern Ethiopia as a World Heritage Site.