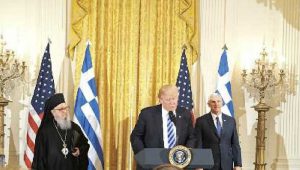 Once again, The National Herald has demonstrated its unique role in stimulating dialogue and the open exchange of ideas concerning important matters facing our community. Its most recent contribution was reflected in two informative items appearing in the May 6 edition regarding the status of the Greek-American political presence in Washington.

First, a Herald editorial titled “Emerging Greek-American Leaders” is a serious and thoughtful review of our past and present-emerging leadership in Washington.

The other, an article by Washington insiders, Andy and Mike Manatos, suggests that the annual Greek-American Presidential reception at the White House is the most important aspect of our community’s effort in Washington.

Andy and Mike Manatos, who run a Washington lobbying business, have been active for many years in Greek-American activities, and in collaboration with the Greek Orthodox Archdiocese of America, instituted the Presidential Reception now in its 31st year. Their article featured a remarkable assertion that the Presidential Reception – a largely social and ceremonial event – is the keystone of the Greek-American presence in Washington.

This claim was puzzling and disappointing.

The Manatos’s major thesis that the Greek Orthodox Church in America through Archbishop Demetrios and his chief political agent, Father Alexander Karloutsos, are and should be the key individuals in our Washington presence, is simply unrealistic in the real world of U.S. government and political policy.

First, it raises a fundamental question whether it is effective or appropriate for clerics to intrude in complex foreign policy issues in contemporary America,the largest and greatest democracy in history. It raises the red flags of confusion as reflected in the Archbishop’s continuing involvement in the Cyprus dispute and other Greek-related issues. While his concern is commendable, it is counter-productive and betrays an inability to separate secular political issues between Greece, Cyprus and Turkey from the Church’s understandable concern for the welfare of the Ecumenical Patriarchate in Istanbul.

Such action is not only politically wrong-headed but harmful. Harmful in that it sends a signal to Ankara that Archbishop Demetrios whose immediate ecclesiastical superior is Patriarch Bartholomew and Father Karloutsos, a publicly acknowledged confidant of the Patriarch, are working openly against Turkish political interests. How does this help Cyprus or the Ecumenical Patriarchate? Turkish President/Prime Minister Erdogan and his ministers whose cooperation is essential to relating pressure on the Ecumenical Patriarchate, certainly can’t be happy with the Patriarch Bartholomew’s American representatives’ political maneuverings. The Church in America has simply no business interjecting itself into Greek political issues.

It also significantly undercuts the Church’s moral credibility and that of thousands of the faithful and religious rights advocates who correctly point to Turkey’s consistent violation of the Patriarchate’s right to religious freedom and to reopen the Chalki Seminary. This situation is clearly a universally recognized issue of religious freedom. In contrast, Greece’s disputes over Cyprus, illegal Turkish flights in the Aegean and other differences, while critical, are bi-lateral political issues. Mixing the status of the Patriarchate with these matters only hands Turkey another lever of pressure, and highlighting the involvement of Greek-American clergymen further roils the waters.

Splitting the Patriarchal issue from Cypriot and Greek national issues in no way diminishes the tragedy that thousands of Turkish troops still occupy that island nation.

But it is important that our precious resources and vigilant attention not be diluted by spreading ourselves too thin. We cannot afford ineffective extraneous clerical interference in the important “national” issues that are best left to secular political leaders in America, Cyprus,Greece and Europe.

It is reassuring that Greek Orthodox Americans feel close to their local churches and view them as centers of community activity but not as political vehicles. It is also well to remind ourselves, however, that we are not living under Ottoman Turkish rule when the Church was designated by the Sultans as the only relatively independent institution. To encourage the Church in America to assume such a role is obsolete and ineffective. We do not need a Martin Luther King; our community faced challenges in America but did not suffer centuries of slavery and oppression.

What is needed now, as the Herald’s perceptive commentary advises, are tested political leaders with recognizable credibility to lead our advocacy.

In chronicling the evolution of our community’s political presence in Washington over the years, the Herald cites the critical contributions made by distinguished Greek-American members of Congress, among them Rep. John Brademas, Senator Paul Sarbanes and Representative Gus Bilirakis, along with Senators Olympia Snowe and Paul Tsongas. They were joined by Phil-Hellenes as Thomas Eagleton, Joe Biden, Ben Rosenthal and Ed Derwinski. It also praises the efforts of present members of Congress, Gus Bilirakis, John Sarbanes, Carolyn Maloney and Senator Bob Menendez. In contrast, the Manatos depiction of political Washingon fails to make not even one mention of the dedicated and hardworking Greek-American and Phil-Hellenic elected officials not just in D.C. but around the country. The Herald rightly recognized these champions, both past and present, of our causes, who like the 300 heroes of Thermopylae have stayed ever-vigilant at their posts and loyal to the cause. Instead, the Manatos article showers extraordinarily lavish praise on Father Karloutsos, portrays Archbishop Demetrios as our political leader and describes their participation in the White House ceremonies as our community’s pivotal presence in Washington. This approach to rely on White House receptions and expensive dinners honoring public officials, some deserving, some not, as important to our collective causes, is in reality a fragile substitute for realistic and substantive policy.

Case in point: President George W. Bush, like his immediate predecessors and successors, sponsored during his first term, presidential receptions where hierarchs, priests and laity were warmly welcomed, and private presidential meetings were bestowed on the “presiding” Archbishop. President Bush, despite sharp political disagreements, was considered, even by many of his most fervent opponents, as an engaging and decent individual. Yet, on the day after his reelection in November, 2004, his administration suddenly and without forewarning, recognized FYROM as Macedonia. This action came as a total surprise, because it contradicted existing U.S. policy, concretely expressed by American-backed negotiations between Greece and FYROM. This shocking announcement blindsided Athens, other nations and our community, creating a firestorm of protest in Greece and around the world. It should now be historically clear that those intimate meetings between President Bush and the Archbishop, at the end of the day, had no impact on the Bush Administration’s policy on the Macedonian issue. In fact, the reverse was true.

And despite dinners and receptions, such turn-abouts are Bi-Partisan. Consider President Carter, an individual of publicly-recognized rectitude, who made a highly public campaign pledge to support the congressionally-approved embargo on U.S. arms sales to Turkey. Then once in office, he completely reversed himself and successfully moved to abolish the arms ban on Turkey. Let the historical record also show that at the very time President Carter was aggressively working against our community on this most important of issues, Archbishop Iakovos trekked to the White House to receive a high Presidential award from Carter before an audience of selected Greek-Americans. My recollection is that to their credit, not one Greek-American member of Congress attended this event. It should be obvious by now, while such ceremonies may be great for our collective egos or for the individual prestige of an Archbishop, they are no substitute for persistent and effective political strategies. For some observers, it might appear that successive presidential administrations might not be incorrect in viewing the Greek-American community through the prism of White House receptions, not as vigorous advocates of principled positions of political freedom and human rights.

This is not to devalue completely past and even present contributions by Hellenic organizations in Washington, the Manatos firm included; but the daunting challenges facing Greece today demand a much more inclusive and skillful political Washington presence. These serious challenges and threats are clear and present: Greece’s perilous economic condition; radical and unpredictable changes in Turkey; general instability in the Eastern Mediterranean and the Middle East; and a genuinely new presidential administration in Washington whose policy directions are just beginning to take shape.

The National Herald’s objective and perceptive analysis of our situation makes the case, in this writer’s view, for an urgent and new approach – one that builds, as the Herald editorial advises, on the community’s emerging broader leadership. Existing arrangements are not to be summarily dismissed; but given the stakes, it is imperative for our community’s institutions and activists to rigorously and frankly reassess priorities.

The Greek Orthodox Archdiocese must get out of the political business. It is neither equipped or qualified for such an endeavor. Will its mission be Pastoral or Political?

Those who have over the years generously contributed large sums to our causes, must seriously determine whether their investments have generated fruitful outcomes, as must those activists who unselfishly devote great time and effort.

A new, and it must be stressed, vastly more inclusive leadership is needed in Washington. One which tenaciously focuses on the important mission before us and is not preoccupied by irrelevant social-ceremonial activities, too often touted as politically meaningful.

The Herald editorial’s Emerging Leaders again shows us the way. We must recruit and enlist new talent and broaden our reach. We owe this to the struggling and heroic Greek and Cypriot peoples and to those who did so much before us and those who will carry the torch in the future.

In this respect, we must always remember that celebratory Ceremonies and Dinners do not a policy make.

Peter Marudas wrote editorial pieces on Greece, Cyprus, Turkey and the Ecumenical Patriarchate for the Baltimore Sun in the early Nineteen-Sixties and covered the 1965 Cyprus talks convened by President Lyndon Johnson. He served as Chief of Staff to Senator Paul Sarbanes in both his Senate and House offices. Marudas also served as Chief of Staff to Baltimore Mayors: Theodore McKeldin, the city’s last Republican Mayor; Democrat Thomas J. D’Alesandro,III, brother of Nancy Pelosi, the House Democratic leader; and as senior staff and advisor to Kurt L. Schmoke, Baltimore’s first-elected African-American Mayor.