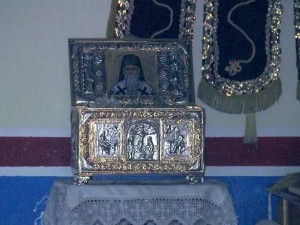 Rousakis says the sanctuary houses relics of the saints who gave the church its name. They are sacred objects, brought here from Greece, that serve as a link to martyrs murdered 550 years ago. (Photo: WTSP)

Her 911 call got firefighters there in time to save something extraordinary inside.

Carol Dyer started driving her paper route late, in another part of town. But she says something steered her to Riviere Road, right past St. Raphael Greek Orthodox Church.

“It was the Holy Spirit of God. Point blank,” Dyer told me. “I started doing that neighborhood down there, and I just felt a grinding in my spirit. It wasn’t right… I needed to do this section up here.”

She spotted a mist or haze around the church.

“I pulled in, it was definitely smoke, and I called 911 right away,” she said.

Fire and smoke had already wrecked the kitchen and roof of the building.

But Father James Rousakis quoted a Greek expression meaning, “It could have been worse.”

Rousakis says the sanctuary houses relics of the saints who gave the church its name. They are sacred objects, brought here from Greece, that serve as a link to martyrs murdered 550 years ago.

“The parish was named after Saints Raphael, Nicholas, and Irene, and these are fragments of the bones of these people who gave their lives — literally — for Christ,” Rousakis said.

Because of that 911 call before sunrise, firefighters got to the church in time to preserve those precious, holy objects inside.

“Is that a miracle? How would you describe that?” I asked the priest. “Divine providence,” he replied.

“It was all God,” Dyer told me before she left to finish her delivery route. “It was just all God orchestrating this, because I could have been 10 minutes one way or the other and not seen it.”

Fire investigators have been at the church all morning, working to figure out what caused the blaze.

The congregation has already been offered another location to hold services until their building is repaired.