[ditty_news_ticker id="27897"] A Church in Captivity: The Greek Orthodox in America 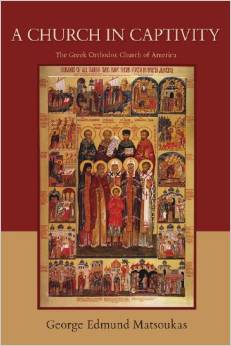 The Recognition Programs Coordinator of iUniverse has informed George E. Matsoukas that his book, A Church in Captivity: The Greek Orthodox Church of America, is now part of the Reader’s Choice Recognition Program.  Upon its publication in July 2008,  iUniverse honored the publication with its selection as an Editor’s Choice book.  The book is also included in the Spring Arbor database catalog of Christian Bookstore vendors.

Reviews of “A Church in Captivity: The Greek Orthodox Church of America”

“These personal essays … are recommended reading for any … Christian interested in the perspective of an objective protagonist of recent Orthodox Church history in America.  The author is to be commended not only for his exposé of ecclesiastical matters that concern the laity and the discord that resulted in transitioning from an inclusive church (laity, clergy and hierarchy) to an exclusively hierarchic entity but also for offering glimpses into the numerous issues that remain unaddressed and unresolved particularly in reference to autonomy, self-governance and Orthodox administrative unity that remain most illusive.”

“First, (Mr. Matsoukas) recognizes that reversing this 20 plus-year journey into the abyss of disunity, autocracy, and ethnic purity, requires the combined efforts of hierarchs, priests, and laity.

Second, Orthodox Christian unity in America at every level is both an essential and a necessary ingredient if the Church is to carry out its prime directive from the Resurrected Christ, its Great Commission of Pentecost, to bring His teachings and His offer of Salvation to “all nations.”

Third, the ultimate transformation of Orthodoxy in America into a self-governing body, lead by an American Synod of all of our canonical bishops, will release our people from servitude on the one hand, and, on the other, enable the kind of political and economic support our ancient Patriarchates can only dream of today.”

“The book is organized into twenty-three different essays each of which features a different topic which makes it easy to refer back to topics in the different sections.

Matsoukas’ essays offer a passionate believer’s insights and recommendations for how to increase the role of the laity within the Orthodox Church in America and ultimately a blueprint for changing the church from its current exclusive nature to a more inclusive church that is responsive to the needs and wishes of its American believers.  Bottom line:  This book is recommended for all religious collections.”

Also reviewed in The National Herald in February 2010: Click Here.