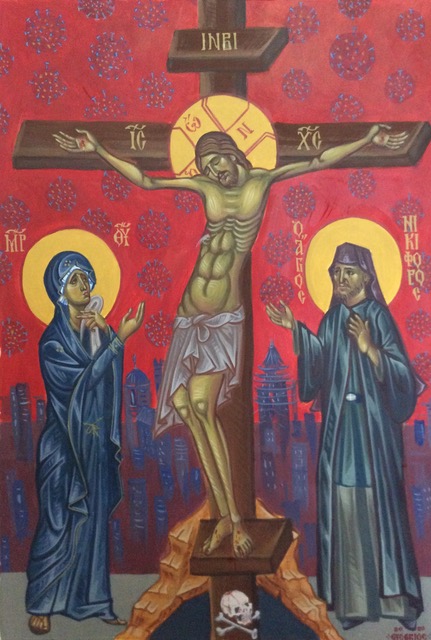 During this pandemic, as we collectively experience the global outbreak and exponential spread of the coronavirus, the Venerable Nikephoros the Leper appeared to someone in Greece and told him: “Tell the people not to be afraid of the virus. And, in the event that someone gets infected, tell them to pray to me and I will help them.”

Rendered at the hands of iconographer, Archimandrite Evsevije (Meandzija), a Serbian post-graduate student at the Theological Faculty of the University of Athens, this new icon for our times, represents the Theotokos and St. Nikephoros praying before the Crucified Lord to save humankind from the coronavirus. 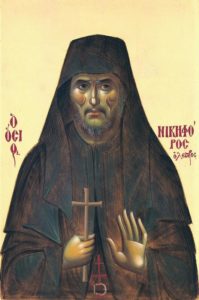 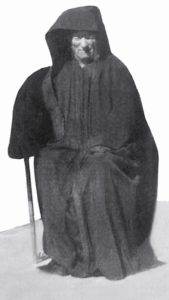 Fr. Nikephoros (in the world, Nicholas) was born in a village of Chania, in Serikari, Crete. His parents were simple and pious villagers, who while he was still a small child, died and left him an orphan. Thus, at the age of thirteen, he left his home, traveled to Chania and began to work in a barbershop. There he started to show the first signs of Hansen’s disease (i.e. leprosy).

At that time, lepers were exiled to the island of Spinaloga, because leprosy was a transmissible disease and was treated with fear and horror. Nicholas, when he was sixteen years old and when the signs of his disease began to be more visible, to flee from the enclosure on Spinaloga, fled with a boat for Egypt. There he remained working in Alexandria, again in a barbershop, however the signs of his disease became even more evident, especially on his hands and face. At the suggestions of a cleric, he fled to the island of Chios where there was a home for lepers, in which there was also a priest, Fr. Anthimos Vagianos, later St. Anthimos of Chios.

Nicholas reached Chios in 1914 at the age of 24. At the leper home in Chios, where there was a grouping of many beautiful little homes, was a chapel of St. Lazaros, where was preserved the wonder-working icon of Panagia of Ypakoe (Obedience). The name of the icon honors the obedience of the Theotokos to God’s will for her to give birth to His Son, so by her obedience people would also obey His will. The Greek word Υπακοή means “obedience.“ In that place, a stadium of virtues was opened to Nicholas. Within two years St. Anthimos discerned that he was ready for the angelic schema and tonsured him a monk with the name Nikephoros. The disease progressed and evolved in the absence of suitable medicines, and brought many great changes (the medicine was found discovered, in 1947).

Fr. Nikephoros lived with indiscriminate, genuine obedience, with austere fasting, working in gardens. He also compiled in a catalogue the miracles of St. Anthimos, which he had seen with his own eyes (many took the place during the healing of the demon-possessed). There was a unique spiritual relationship between St. Anthimos and monk Nikephoros, who “did not separate himself from him by even a step”, as mentioned by Fr. Theoklitos of Dionysiou in his book “St. Anthimos of Chios”.

Fr. Nikephoros prayed for endless hours at night, performing countless prostrations, not offering a word to anyone nor spoiling his heart on anyone, and was the head chanter of the church. Because of his illness, however, slowly he lost his eyesight and most of the hymns were then chanted by others.

In 1957, the Lovokomeio of Chios was closed and the remaining patients, along with Fr. Nikephoros, were sent to the St. Barbara Anti-Leper Station in Athens, at Aigaleo. At that time Fr. Nikephoros was about 67 years old. His body parts and his eyes had been totally affected and transformed from the illness.

There, in the Anti-Leper station lived Fr. Eumenios, who also had Hansen’s disease, but because of medical advances was totally cured. He decided, however, to remain for the rest of his life in the Anti-leper station near his fellow patients, who he treated with much love. Thus he became a spiritual child of Fr. Nikephoros to whom, as a reward for his patience, the Lord had granted many gifts. Many people flocked to the humble cell of the leper monk Nikephoros, at St. Barbara of Aigaleo, to receive his blessing. Those who met him mention how, though he was confined to bed, with wounds and pains, he did not murmur but showed great patience.

He had the grace of comforting the troubled, though his eyes were constantly irritated, his vision was minimal, and he had hooked hands and paralyzed lower extremities. Besides all of these ailments, he was most sweet, mild, greatly smiling, relating grace-filled stories, he was enjoyable, lovable. He would question: “My children, do you pray? And how do you pray? “…with the prayer of Jesus, you should pray, with the ‘LORD JESUS CHRIST, HAVE MERCY ON ME’. Thus you should pray. This way is good.”

His face, which was eaten by the signs of his sickness and wounds, shone and imparted joy to all who saw this totally poor and phenomenally sick man, who said: “Let His holy Name be glorified.”

At the age of 74, on January 4th, 1964, Fr. Nikephoros reposed in the Lord. His holy relics were fragrant when they were later uncovered. Fr. Eumenios and other pious people offered many occasions when miracles occurred at the intercessions of Fr. Nikephoros.

In December 2012, Fr. Nikephoros was declared a Saint, through an official Act of Canonization by the Ecumenical Patriarchate of Constantinople. His memory is celebrated on 4/17 January, which is the date of his repose.

All the angels were astonished by the struggles and strict asceticism of the Venerable Nikephoros the Leper; for like another Job, patiently enduring his pain, he glorified God, Who has crowned him now with glory, distinguishing him through miracles. Rejoice, instructor of monastics. Rejoice, beacon of light. Rejoice, for a delightful fragrance pours forth from your relics.

To the Melody of “O Victorious Leader”
The valiant athlete of endurance and fortitude, the steadfast diamond of patience and long-suffering was tried by affliction and sickness, and in this way he glorified the Most High God, let us extol Nikephoros the Leper, saying unto him: Rejoice, O namesake of victory.

(Vitae based on: Nikephoros the Leper: The Radiant Athlete of Patience, by Monk Simon, Athens 2007; English translation of the Greek text from: http://ierapostoli.wordpress.com/2009/02/27/tyflos_nikoforos/).