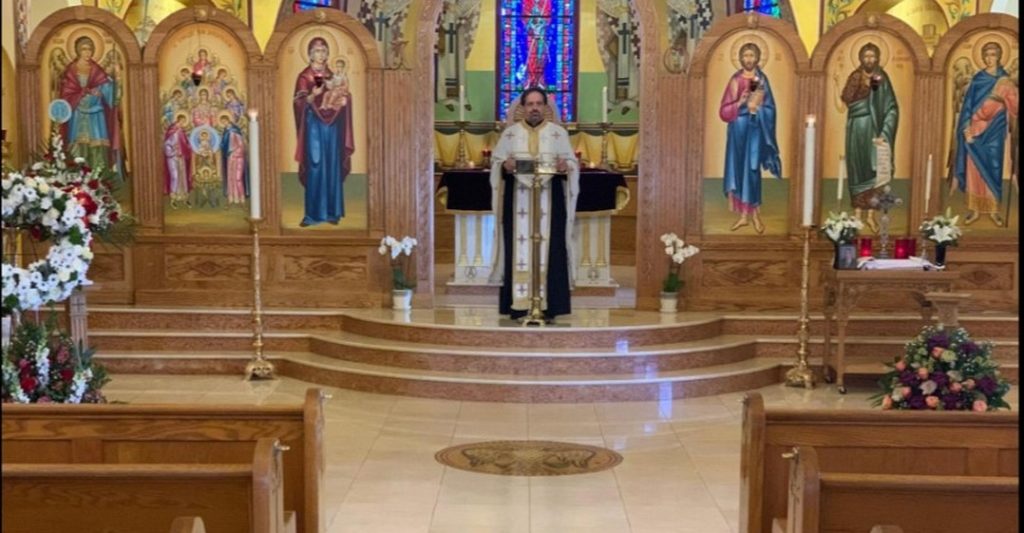 WATERTOWN, MA – Eastern Orthodox Easter will be celebrated on April 19 this year. There are many services leading up to the religious holiday throughout the world which usually draw thousands of people together and raises thousands of dollars for churches. This year, however, for the first time in history, every Greek Orthodox Church in Massachusetts is closed and anyone wishing to participate in one of the services will need to watch it virtually via Facebook or YouTube.

The Taxiarchae Archangels Greek Orthodox Church in Watertown estimates it will lose approximately $250,000 over the next three months. The money would have been collected from weekly candle and tray donations during regular Sunday liturgies which ended March 8; and collections during the services of Holy Week leading up to Easter, Easter Sunday, church hall rentals, memorials, and the three-day Grecian Festival.

Costa Karageorgis of Milton, director of the Taxiarchae Sunday School and treasurer of the Taxiarchae Parish Council, has been a member of the church for nearly 50 years. He said people are still able to make donations online, however, the amounts received online compared to in-person collections are down approximately 50 percent. He said they are in the process of applying for relief from both the Care Act as well as the small business association to help aid with expenses temporarily but they rely heavily on donations.

In an email to the Citizen-Herald, he said this year will be strange and he will miss receiving the sacraments during Holy Week such as Holy Unction when the priest anoints the faces and hands of parishioners with holy oil; Good Friday when a procession led by the priest with the coffin and body of Christ called the “epitaphio” is taken outside the church and everyone follows it, holding lit candles, around the church; and the midnight Resurrection service on Holy Saturday when the all the lights in the church are shut off and everyone’s candles lit and raised up and down, making the sign of the cross as they sing the hymn in Greek and English, “Christ is risen from the dead, trampling down death by death, and to those in the tombs, granting life.”

In addition to the church services, many Greek Orthodox Christians will also miss the social part of the Easter celebrations which begins the night of the resurrection and on Easter Sunday with feasts of roasted lamb and a soup known as mayiritsa, made with the organs of the lamb. Many families will be scaling back and celebrating on their own this year or possibly postponing their large, extended family gatherings due to the social distancing order from Governor Charlie Baker in effect until May 4.

Rev. Father Athanasios Nenes and Rev. Father Philip Halikias, clergy of the Taxiarchae, said it has been challenging to conduct services in front of empty pews, especially when giving their sermons because they aren’t able to see the audience react, but they want their parishioners to be safe.

“It hurts me big time how empty the church is,” said Nenes.

On the positive side, Nenes and Halikias are able to track how many people are watching the virtual services through analytics tools on Facebook and YouTube.

“We have had more attendance virtually than we would have in person,” said Halikias.

He believes this could be a sign of the times.

“I think this, in some respects, is creating a longing for people and perhaps it’s coincidental that it’s during Lent, that this is adding to the longing and to the desire to connect to others and share the faith,” he said.

Halikias was recently ordained into the priesthood. This is his inaugural Lenten season and it hasn’t been anything he thought it would be due to the coronavirus outbreak. However, he hopes people will to see the positive of these uncertain times.

He recommends parishioners use this time to allow things to be weeded out of their lives that are just distractions.

“There’s a richness that can come from this period of everything around us being canceled except for the supermarket,” he said. “This is a time to connect to each other and to connect to God.”

Belmont resident Nancy Sarris, Taxiarchae Parish Council president, said the leadership took action in February, before the closures began, to prepare. A technology ministry was formed which installed the wiring necessary to enable services to be remotely live-streamed for people to watch from their homes.

“Taxiarchae is proud to be one of only four Greek Orthodox churches in Massachusetts who were approved by the Bishop, the Metropolitan Methodios, to broadcast live services,” she wrote in an email to the Citizen-Herald.

Watertown Town Council member Angeline Kounelis, who has been a member of the Taxiarchae church for 56 years, said the virtual services are a blessing.

Both Halikias and Nenes are also using Zoom technology to connect with parishioners for Bible study and coffee hour.

A new ministry for elderly parishioners

In addition, another ministry to help elderly members of the church, Helping Hands, led by Georgia Bitsikas and Eliza Xanakis, was started. Sarris said the ministry helps with grocery shopping, pharmacy pick-ups and regularly calls nearly 600 present and past parishioners to check on them.

“A little conversation and to know someone cares means a lot at an extraordinary time like this,” wrote Sarris.

To make a donation to the Taxiarchae Archangels Greek Orthodox Church