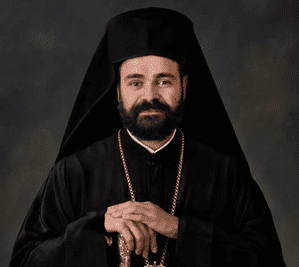 His Eminence Metropolitan Nathanael of Chicago.(Photo provided by The Metropolis of Chicago)

BOSTON – His Eminence Metropolitan Nathanael of Chicago, in a revealing interview with The National Herald, speaks with boldness about ecclesial life in America. He is the first hierarch of the Greek Orthodox Archdiocese of America to speak publicly about the revocation of the Archdiocesan Charter, the questionnaire regarding the new one, and also the dethronement of Metropolitan Evangelos of New Jersey.

Metropolitan Nathanael revealed that no decision was taken by the Eparchial Synod of the Archdiocese on all the above. The members of the Synod weren’t even informed about the proposals of Archbishop Elpidophoros. They all learned the news from The National Herald.

TNH: Your Eminence, let us begin with the recent sale of the Metropolis Residence, often referred to as ‘Burton Place’. What was the sale price? Are you satisfied with it?

Metropolitan Nathanael: As we have noted in our public announcement on February 3, 2022, the Burton Place Property sold for $3.15 Million. Following an extensive market analysis and multiple independent appraisals of the property, we are most pleased with the sale price. We are grateful to God and to our ancestors who provided the Holy Metropolis of Chicago the means to serve the faithful through this property. We are, however, called to always look forward and to build upon the successes of the past. According to the will of our people as expressed during the 2019 Clergy-Laity Assembly, we received the mandate to sell the Burton Place property and to use the funds to establish a new Metropolis Center that will serve our people for generations to come.

TNH: What is your opinion of the survey related to the drafting of a new Charter for the Archdiocese?

Metropolitan Nathanael: The survey in question, among other things, is the Archdiocese’s attempt to make the development of the new charter a more inclusive process. I think that the spirit of inclusivity is admirable. However, I am doubtful that the survey achieved this goal. Specifically, I feel that the process is limited in its inclusivity because the Archdiocese limited the source of possible survey questions to the Archdiocesan Advisory Committee on the Charter. Participation was also limited to the same Advisory Committee on the Charter. Therefore, on February 8, the Holy Eparchial Synod decided to expand participation to all clergy and Parish Council Presidents. The clergy and lay leaders of our parishes have yet to be invited to take the survey.

Moreover, once the survey questions became available to the public through your publication, clergy and lay leaders across our Metropolis began raising serious concerns. For this reason, we convened meetings of our clergy and laity to respond to their questions and to provide as much information as was available. In general, our clergy and laity don’t understand what, if anything, was wrong with the 2003 charter. They don’t understand why we find ourselves in this situation. Regarding the survey questions, people are uneasy about questions related to canonical matters. The survey gives them the false impression that canonical and ecclesiological matters are open to debate. For instance, which Hierarch is commemorated in divine services and a mandatory retirement age are canonical matters, not matters of preference. Our people also expressed serious concern about the question related to the title of parish property. Lastly, the clergy and the faithful were troubled by the questions that hinted at a particular agenda, one that sought to revert the Church in America to that of bygone era where only one Hierarch (the Archbishop) held ecclesiological authority, and who issued mandates to Auxiliary Bishops across the country. It is believed that such a vision leads to regression, not progress and growth, which are needed to lead people back to the Church.

TNH: Did you have prior access to the survey?

TNH: Does the Archdiocese need a new Charter?

Metropolitan Nathanael: What is known comes to us from the announcement of the Holy and Sacred Synod of the Ecumenical Patriarchate, which announced on October 8, 2020 that the Charter of our Archdiocese was placed in abeyance, following reports submitted by His Eminence Archbishop Elpidophoros. The members of the Holy Eparchial Synod have not seen the contents of these reports, nor have we requested them from His Eminence the Archbishop since we respect his right, and that of any other Hierarch, to correspond with our Patriarch and Father in confidence. As Hierarchs of the Ecumenical Throne, the members of the Holy Eparchial Synod remain obedient to our Ecumenical Patriarch and trust that the Holy Spirit inspires and guides the work of His All-Holiness and the Holy and Sacred Synod of the Ecumenical Patriarchate. God has allowed us to reach this point in our history for a reason; I believe that His plan for the Church in America is still unfolding, and it will be revealed to us in time.

TNH: Did Archbishop Elpidophoros have the consensus of the Eparchial Synod prior to recommending to Patriarch Bartholomew that the Charter be placed in abeyance?

Metropolitan Nathanael: The Holy Eparchial Synod was not aware that His Eminence Archbishop Elpidophoros submitted reports to the Ecumenical Patriarchate related to the Charter of the Archdiocese. We never discussed the idea or possible need to request a new Charter from the Patriarchate. On September 9-10, just one month before the announcement from the Ecumenical Patriarchate, our Archdiocese held its 45th Biennial Clergy-Laity Congress, with more than 1,200 delegates in participation, except for His Eminence Metropolitan Evangelos, who raised concerns about rumors of a group commissioned by the Archdiocese to study changes to the charter, no one raised any question related to the Charter. The Clergy-Laity Congress went about its work assuming that everything was proceeding as normal. No one could have imagined that we would find ourselves in the present predicament just a month later.

TNH: How do you feel about the removal of Metropolitan Evangelos from the Metropolis of New Jersey? Would you have any problem agreeing to the restoration of his former responsibilities?