Download the Article (PDF)
​“Never, never, never let anyone tell you that, in order to be Orthodox, you must be Eastern.  The west was fully Orthodox for a thousand years, and her venerable liturgy is far older than any of her heresies.”
St. John of San Francisco and Shanghai

On occasion, as I travel, I come across the opinion that churches that do not celebrate the Divine Liturgies of St. John Chrysostom or St. Basil the Great are not truly Orthodox. Some Orthodox Christians, it seems, have come to associate the Eastern Rite or Byzantine Rite as the only acceptable Orthodox liturgical form. Consequently, when they see an Orthodox Church using a Divine Liturgy other than what is utilized in the Eastern Rite, they conclude that this is not canonical Orthodoxy. I understand that this view often comes from a lack of knowledge regarding the history of the Christian Church, and perhaps a limited exposure to our Orthodox brothers and sisters who worship the Holy Trinity – Father, Son, and Holy Spirit – in the Western tradition and other canonical traditions. I hope, in this brief article, to offer a more historically accurate perspective that leads to mutual love and respect for all the faithful regardless of which Divine Liturgy they are blessed to celebrate.

Through the missionary efforts of the Holy Apostles and disciples of our Lord, Christianity grew from a small sect of Jewish believers in Palestine, experiencing a rapid growth of converts through the descent of the Holy Spirit at Pentecost, and expanding to the farthest reaches of the Roman Empire and beyond. As they travelled, they shared the faith of the One Holy Catholic and Apostolic Church, and through the laying on of hands, the Apostles ordained bishops, priests, and deacons to serve these new parishes, teaching them how to worship, pray and live as faithful Orthodox Christians.

“During the first thousand years, before Christianity experienced the Great Schism between the East and the West, the five great centers, or Patriarchates, of Rome, Constantinople, Alexandria, Antioch, and Jerusalem held the Orthodox Christian Faith in common, but used different eucharistic liturgies to express that Faith. When the Church of Rome broke with Orthodox Christianity, it took with it the ancient liturgies of the previously Orthodox Christian West. Before that time, there would have been no difficulty in stating that the Western Rite of Orthodoxy was simply the liturgy as used by Orthodox Christians in the West.” (Saint Andrew Service Book, pg. 4)

The liturgical life of the Orthodox Church developed over time from very small gatherings of Christians in houses and catacombs, to larger assemblies with more and more converts to the faith. But whether the gatherings were small or great, they were to be orderly and reverent, guided by the bishops and presbyters (priests) in communal prayer and the celebration of the Holy Eucharist. St. Clement, the third Bishop of Rome (92-101 A.D.) after the Holy Apostle Peter, describes this orderly approach to the liturgical life of the Church in his first epistle to the Church in Corinth:

“Let us preserve in the Church the order appointed by God. These things therefore being manifest to us, and since we look into the depths of the divine knowledge, it behooves us to do all things in [their proper]order, which the Lord has commanded us to perform at stated times. He has enjoined offerings [to be presented]and service to be performed [to Him], and that not thoughtlessly or irregularly, but at the appointed times and hours. Where and by whom He desires these things to be done, He Himself has fixed by His own supreme will, in order that all things being piously done according to His good pleasure, may be acceptable unto Him. Those, therefore, who present their offerings at the appointed times, are accepted and blessed; for inasmuch as they follow the laws of the Lord, they sin not. For his own peculiar services are assigned to the high priests [bishops], and their own proper place is prescribed to the priests, and their own special ministrations devolve on the Levites [deacons]. The layman is bound by the laws that pertain to laymen. Let every one of you, brethren, give thanks to God in his own order, living in all good conscience, with becoming gravity, and not going beyond the rule of the ministry prescribed to him.” (1 Clement 40-41)

Lest we think that this orderliness of liturgical worship was uniform from the beginning, we need to keep in mind the way in which liturgical forms developed. With an eye towards the Jewish ceremonial rites, the early forms of worship were guided by the bishops – each bishop having some improvisational freedom within the general format handed down from the Apostles (Reading of the OT Scriptures, Chanting of Hymns, Communal Prayers, and the Celebration of the Eucharist).

“In the period before the fourth century, either the celebrating bishop or priest usually improvised the liturgical prayers in accordance with traditional patterns…. From the fourth to the seventh century, however, compositions multiplied and quickly formed a heritage that was passed on in the Church and gave form to its prayer…. By the beginning of the seventh century new compositions became much less frequent, first at Rome and then, a little later, in Spain.” (The Church at Prayer, Vol. 1, pg. 46)

Additionally, by the fourth century the liturgical language used in the western part of the Roman Empire was Latin. So, during the era of the First and Second Ecumenical Councils, and while St. John Chrysostom was serving the Divine Liturgy in Greek, as the Archbishop of Constantinople, the Orthodox Church in the West was liturgizing in Latin.

All of this is to say that the liturgical life of the Church, both in the East and the West, developed slowly over time in ways that were both consistent with the One Holy Catholic and Apostolic faith, unique to the regional setting, and under the guidance of the local bishop, centuries before the Great Schism in the year 1054 A.D. 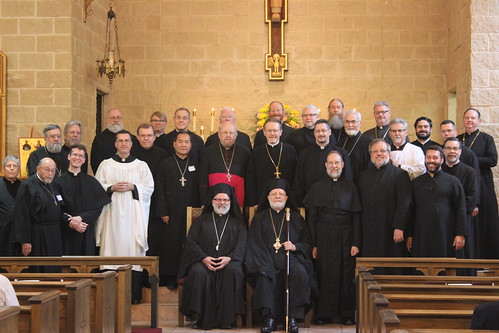 Within the Holy Orthodox Church there are a several liturgies approved and used to celebrate the Mystery of the Holy Eucharist.  These include:

The Liturgy of the Presanctified Gifts by St. Gregory the Great
The Liturgy of the Presanctified Gifts is not specifically a Divine Liturgy, but instead is a vesperal liturgy with the distribution of the Holy Eucharist which was consecrated during the Divine Liturgy the prior Sunday, towards the end of the service.  This liturgy is served only on weekday mornings and evenings during Great Lent.

In the Western Rite, “there are two forms of the Divine Liturgy. One is the revision of the Gregorian Liturgy, corrected in light of Orthodox faith and practice, as approved in 1870 by the Russian Holy Synod and subsequent Orthodox Patriarchs. The other, the Liturgy of St. Tikhon, is based upon English usage and was corrected and approved by the Russian Holy Synod in 1904. It is named after St. Tikhon because it was he who, when serving as missionary bishop in America, was instrumental in securing its original approval.” (Saint Andrew Service Book, pg. 5)

The Liturgy of St. Gregory the Great
Liturgical commentators have attributed the Roman Liturgy of St. Gregory the Great to St. Peter since the 5th century. In any event St. Gregory did not construct this ancient and venerable liturgy but it is named for him as he codified the variable parts as they are found in the Sacramentaries of St. Gregory [590], Gelasius [491] and St. Leo [483]. Of the family of liturgies used in the West, the Roman liturgy has been the primary liturgy served in the Latin West up until Vatican II in 1969. A few modifications have been made to this rite for use in the Orthodox Church consisting of the addition of an explicit epiclesis, the removal of the filioque from the Nicene Creed and the addition of the prayer, “I believe and I confess…”.

The Liturgy of St. Tikhon of Moscow
The Liturgy of St. Tikhon, (so called) is the slightly modified English use of the Roman Rite and has been known as the Sarum Rite since the eleventh century. It has been slightly modified for use in the Antiochian Western Rite. This Rite was approved by the Russian Holy Synod in 1904 in response to Anglican congregations desiring to become Orthodox.

In conclusion, I want to give a caution to those of us in our Eastern Rite Orthodox Churches in the United States who have become very familiar with the Divine Liturgies of St. John Chrysostom, St. Basil the Great, and St. Gregory the Great. When we have become familiar with these Eastern Rite Orthodox liturgies and have forgotten that the Holy Orthodox Church was throughout the East and West, we may be tempted to assume that the Western Rite liturgies are not truly Orthodox. Forgetting that these liturgies of the West were blessed by the Holy Fathers throughout the centuries, we may be tempted to think that the Rite we serve is the only legitimate Rite. One of my brother hierarchs once said that we should live as if there is neither Eastern Rite or Western Rite, but as One Holy Catholic and Apostolic Church in which there are different liturgies celebrated. Let us all continue to be in awe of these Divine Liturgies which we have been blessed to serve, inasmuch as they connect the Church Militant and the Church Triumphant.  When we give less respect to one of these liturgies and the Rites in which they are practiced, and God forbid even demean them in some way, we do not do the work of our Heavenly Father but instead we drift away from His blessing. May God receive our prayer and the Holy Gifts which are offered on behalf of all, and for all. 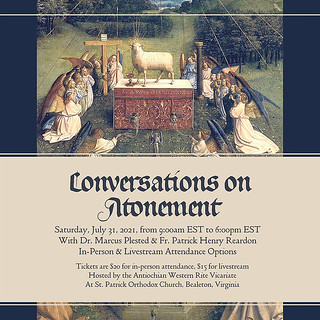 Cleanse the thoughts of our hearts by the inspiration of Thy Holy Spirit,
that we may perfectly love Thee, and worthily magnify Thy Holy Name; through Christ, our Lord. Amen.
(Liturgy of St. Tikhon, Saint Andrew Service Book)
Share. Twitter Facebook Pinterest LinkedIn Tumblr Email
Previous ArticleNew Hybrid Program in Orthodox Christian Leadership for Remote, Part-time Students
Next Article A Revealing Interview with Metropolitan Nathanael of Chicago