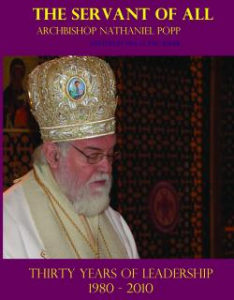 Recently, we received and included into the Heritage Center collection the book, “The Servant of All – Archbishop Nathaniel Popp: Thirty Years of Leadership, 1980-2010,” edited by Ian G. Pac-Urar, Polycarp Books, 2011, 388 pages.

The book includes an “Editor’s Note” and a “Foreword” by the Archbishop of Washington and Metropolitan of all America, Jonah, and five Appendices.
The book includes articles, letters and addresses selected from the writings of Archbishop Nathaniel of the Romanian Orthodox Episcopate of America (“Vatra”). As it is said in the Editor’s Note: “The texts cover a wide range of topics, as befits the wide-ranging demands of the Episcopal throne”.

The articles, appeals and letters of each chapter are, simultaneously, advice, teachings, and offer themselves as models for action.

Very fortunate and useful is the Editor’s decision to precede each article with a short summary and a highlight of its content. This effort deserves special recognition and commendation.

It would be beyond the scope of this presentation to enter into a detailed examination of the materials. What can be said is that each text has a special quality. Each seems to be addressed to “one person”, to one of the faithful. That means that the Archbishop was not addressing a faceless and impersonal multitude but rather a communion of persons, each carrying a specific cross, each in need of special attention. The book is not an icy “handbook” but the warm and caring advice of a loving parent. Consequently, each reader can seek and possibly find in the book the specific treatment for his or her specific ailment.

The texts were written with elegance and in a captivating manner. They are not very long and are keenly focused. The message is conveyed directly without unnecessary length or sophistry.

Typologically, I think the writings belong to the epistolary style used by the early Fathers of the Church. It is a style that is a very subtle mixing of writing and preaching techniques – a style that is direct and very personal.

The texts contain no shred, no iota of self-promotion. Archbishop Nathaniel’s personality is revealed through his writings: spiritual, charismatic, good and above all, humble in the most authentic and inspiring way.

Special attention was given to ponder the evolution and to consider the future of Orthodoxy in the New World. In those pages, a reader can distinguished both the worries and the frustration of the Archbishop with regard to the lack of clarity (to say the least!) of Orthodox ecclesiology. In fact, the Archbishop very clearly points out that Orthodox ecclesiology was bypassed by an overwhelming historical reality: the New World, its Nations, American exceptionalism. This is a very serious problem, and the way it will be addressed may very well spell the future of Orthodoxy in the New World.

The Archbishop correctly noted the specific and distinct character of the New World’s civilization and culture. He presents, directly and indirectly, an environment and a civilization that excludes patronizing attidues in which: taboos are shattered; old ways in some instances become useless; learning from mistakes is considered a virtue and not a sin; and, the “only thing to fear is fear itself”. It is the unique spirit of the New World, the frontier spirit.

In such a context, Archbishop Nathaniel presents proposals and possible solutions able to reconcile Orthodox Tradition with the historical reality of the New World that are summarized by the principle: “There must be one witness, one good order in the Church…” (p. 329-330). In those pages, the reader finds the main characteristic of Archbishop Nathaniel’s writings: the moving, inseparable mixture of Orthodoxy and the frontier spirit.

The Editor of the book, Fr. Ian G.Pac-Urar, and all those who assisted and helped him to publish it deserve our gratitude. The book should be read and used by all the Orthodox faithful, lay or clergy, of the New World.